Map In The Cat

I don’t remember where she came from. She was always there as far as I remember. Young, energetic, lovable, cute, she was our neighborhood cat. The first thing you could notice was that she was very proud and independent. Even as a little kitty, she never let us touch or catch her. we loved to feed her and see her growing day by day.

But there were some people who dealt with her cautiously. One of them was my dad, who loved birds and he had all kinds of birds in his patio (canaries, parrots, parakeets…) and he was always skeptical about a cat’s presence.

Another opponent was our dear wall-to-wall neighbor Mr. Yousefi who had a very beautiful and magical garden with all types of exotic and unusual flowers and plants and a big water fountain with lots of red goldfish.

Every time a bird or fish was missing or Mr. Yousefi’s garden was vandalized, our cat was the first suspect to go on trial. But she wasn’t the only cat in our neighborhood. There were lots of wild, once-in-a-while cats who only came by to steal something or play or mate without leaving any traces of their activities. The only cat who was always present in our place, was our beloved lady. 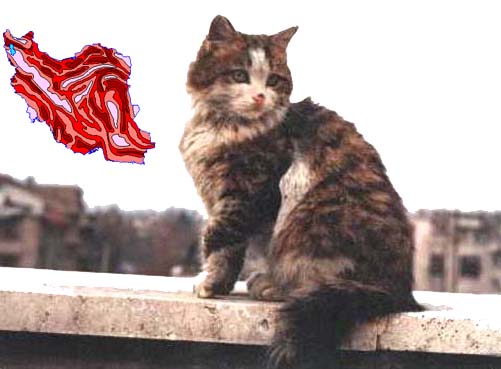 As she grew older she became very beautiful and charming. She attracted tons of males who would come around her territory. And THAT was the beginning of her sufferings. I remember she was always chased by males and believe me, all of them were brutal savages who only raped her again and again and we watched these happenings helplessly.

Some people started to get angry, since the mating (raping) ritual took place mostly at night with all yowling and chasing each other through Mr. Yousefi’s garden and the day after my mom was complaining that cat-semen could be seen and smelt in our balcony at every corner. Some were sick of all the troubles and wanted to send her away because she was the only visible reason for all these problems.

Finally after a couple of weeks, our cat became more and more like a hairy snow-ball. And when we noticed she was pregnant, everyone stopped fighting over her.

We (like other Iranians) keep lots of mattresses in our basement for potential overnight-guests and there was a warm, cozy spot on top of those mattresses where she decided to give birth to her children. Of course it was impossible for my dad to accept this situation. He had the ultimate word in the family and we knew she had no chance to gain my dad’s heart.

I clearly remember that day as my dad went down to the basement to throw the cat out, despite our protests. He told us later that he had held a big stick for shoving her out of the basement, but he saw her standing up meowing, begging my dad to let her stay.

My dad is a tough army officer living with strict rules and discipline — uncompromising to the core. He described the scene as if the cat was really talking to him, convincing him that she had the right to stay. He let her stay and she brought 5 kitties to the world. Ironically the only person who could come very close to her and her kids was my dad and nobody else.

One week later something horrible happened. As my dad went downstairs to feed her as usual, he saw the whole basement full of blood. All of her kids were killed by other wild cats. He found two baby-heads and more body parts around. We didn’t see our lady for a while. We didn’t know if she was alive or injured or even dead. She came back to her territory a few days later wounded and tired.

But it wasn’t the end of conflict. The wild cats came to our neighborhood again and again and she fought with all of them. What I remember was that our place suddenly turned into a battlefield and it was sad to see that our charming beauty was turning into a wrath-machine.

One day Mr. Yousefi whose garden was literally ruined by constant cat fights and chases, decided to deport our beloved cat without consulting us. He made a trap and was able to catch her and put her in a gooni sack. He took her faraway to the other side of the city and released her in a remote area. Then he made a pact with my dad to beat up ALL intruding cats in our neighborhood.

Their war against terrorism was an absolute success, since we also supported punishing cat-criminals who caused our lady’s deportation. Peace and order came back to our area although we missed our cat very much. After three months a miracle happened.

A boy in our neighborhood claimed that he had seen our lady two blocks away from our place. We heard similar claims from other people until one day she appeared in our balcony. Tired, dirty, and very skinny she was in front of us screaming for some food. Every one was deeply touched by noticing her loyalty to her own home. Even Mr. Yousefi was surprised that she could make such long journey coming back home. So even HE brought something to feed her.

I left the country many years ago. I asked my parents about the cat every time I phoned them. Three years ago I came back home for a short visit. She was there. She had become very old but still very charming. I took these pictures:

Two weeks ago while looking at her pictures, I realized that we had never given her a name. That was very strange as every bird and fish and chair in our world had name. I held her childhood picture in my hand and saw Iran’s map. Everything became clear to me.

I had a vision: Raped by intruders, disrespected and deported, accused of making all sorts of trouble, her children brutally killed, and now old, tired, wounded, and disappointed, sitting on her spot on this planet, looking at us. I had found her a name at last.