I'll admit that when I received my copy of Shahin & Sepehr's latest album, “Nostalgia” from Higher Octave's promotions department, I opened the package with some trepidation. After all, it had been a while since “my boys” had put anything new out and I wondered if the time off had done them good or turned them stale. I am pleased to say that the new album is awesome.

I don't know about you, but I am kind of full of the recent explosion in Iranian guitar duos “…blending a fusion of middle eastern, mediterranen and Flamingo…” “Blah, Blah, Blah”. Riding the wave of popularity of the Gipsy Kings and Alabina.

But here comes Shahin and Sepehr to the rescue! Listening to this album is like a really fresh and juicy fruit salad. It's exciting, fresh, full of different sounds and rhythms, fresh, and did I say Fresh? Although you will no doubt hear things on the album that sound so close to something that you can't quite put your finger on, there-in lies the rub. This is precisely what these two best friends were trying to accomplish and why the album is aptly named “Nostalgia“.

Whether it's the feedback distortion wails of Shahin's Santan-esque riffs, or Sepehr's ever so subtle homage to the classic rock keyboard chords of the Doors or Beach Boys, whatever it is, you can't quite peg it, but it's all strangely familiar.

Which brings me to the beat and rhythms.The album explores Rhumba, Samba, Salsa and some kind of variation of an Afro-Cuban blend that I can't quite place, whatever it is it's good and all I know is I want more please.

Shahin typically plays the instrumental guitar, but on this album especially, he pushes beyond it and shows us what a truly gifted talent he is laying down incredible pieces on the electric guitar in all it's wonderful technological glory. The complexity of the chording and melodies firmly establish Shahin as one of the pre-eminent Iranian guitarists of our time.

How do you possibly compliment a talent like Shahin you may ask? Well, we've got that covered with the incredibly deep layering of moods, atmospheres and ambient temperature provided by Sepehr. Reminiscent traces of Air, Daft Punk, and William Orbit fill the backround and you find yourself competing with who to listen to first, and inevitably go back and forth betweeen them.This is one of those albums in which you hear different things each time you listen to it. 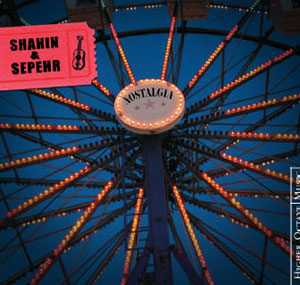 This is also one of those albums that you will play for your american friends and say,

“Hey you know these guys?”,

to which your friends will say, “No, who are they?”,

to which you will tease and say,

to which they will say, “Yeah they sound great”,

to which you will (proudly) say, “They're Iranian, Man!”,

to which your friends will say, “No Way!”

The songs have that special secret sauce in them, that only Iranians will fully appreciate, and the album is filled with subtle Oud, Santur, and I think I heard a Ney in the background somewhere. Persian musical heritage is much more noticeable this time than on previous albums, highly appropriate don't you think?

Shahin & Sepehr are a frequent play on new age radio stations across the country and once I watched world champion figure skater Kristi Yamaguchi skate to one of their songs. Even though the timing could be better, with “Nostalgia“, Shahin & Sepehr have made their strongest play ever into a whole new realm, one I have no doubt will be recognized by the mainstream market.

— Nostalgia
— Norooz
— No Souvenirs
— Ferdowsi in Love
— Midnight in Madrid