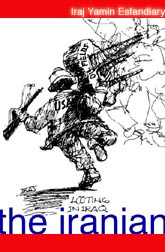 April 9, 2003, the New New Yorker lands on my doorstep, missing the ever present puddle. The front cover shows an image of a soldier shooting directly at the viewer. He's shooting with a video camera, though the camera lens and body is structured much like a gun. Looking down at the brown and green tones of the cover, all I could repeat was a word I had just heard from a news reporter on the telly: “Breathtaking”.

What's more breathtaking really, is the turn of events. How we have gone from the cowboy's narrative of “Operation Iraqi Liberation” (spelling OIL) to the news story “Operation Iraqi Freedom” which spells nothing, but serves as a good cover up for the narrative of an occupation that will keep oil dollar-bound.

Since the arrival of coalition troops to the vicinity of Karbala, I've been thinking about the narratives we spin. The most fundamental narrative of the nation (by which I of course mean Iran) in the past two centuries, at least, has been spun on the basis of the carnage of Imam Husayn and his family– a carnage that took place on the plains of Karbala over a thousand years ago.

In popular Iranian culture the repetition of narratives such as this and poems, too, seem to keep us alert in some ways. How many times do we hear the same old Saadi poem, the repeated Rumi poem, and the Forough poem recur? How many times do we go to see the same ta'ziyeh performance every year on the same day and always enter the theatre or the square at the most exciting moment of the performance, namely the slaughter of some innocent we call mazlum.

Having been conditioned in this way, that is, to see narratives as having fixed, knowable, predictable outcomes, may not be altogether to our advantage, however comforting that may be. For as Gary Saul Morson seems to imply an event might be fixed and knowable — Shirin declares her love to Musa, or Kasra gets a garage for his new car — but any event — even the event of the declaration of love — can have a multitude of outcomes. (He might look down, cough, and have a heart attack. Or a mine may go off and separate them for life… She might sniffle and wipe her nose on her sleeve and he may be revolted forever.)

In fact, as Morson says, we need narratives because there is no goal, no predictable end, no single outcome. We need stories because things don't always fit. The unconscious slip to call the war by the acronym's OIL, fit but all too well. But did its narrative match up with the events it was to describe?

Event 1: “When the US marines enter Basra, they will be met as liberators.”
Event 2:”The war will be short and swift.”
Event 3: “The regime will be our target. The war will not target civilians.”
Event 4: You get the drift….

For each of you, the stars have configured two events this month. Each event may unfold in a variety of unpredictable, unfixable ways and be given several meanings. No two narrative developments from the two events may converge, or they may make sense and converge immediately. Time will move slowly this month, so take time before deciding what story you tell yourself in relation to each event.

Farvardin: Aries
“Your family will visit and there will be a pantry and a cricket.”

Ordibehesht: Taurus
“Friends will throw you a party. And you'll find that Jasmine is not for you.”

Khordad: Gemini
“You'll be asked to drive a Hummer. And you'll keep dialing an unforgettable number.”

Tir: Cancer
“A deep wrinkle will appear on you. And you'll find that you need more led for a favorite pencil.”

Mordad: Leo
“Flights to Hawaii will be overbooked and printed retractions will be overlooked.”

Shahrivar: Virgo
“A silver object catches your eye. Your eye will reject a finger.”

Mehr: Libra
“A box of oranges will arrive in the mail. And the cartoon figure will run with a nail.”

Aban: Scorpio
“You'll come across a body of water and the soap you bought will suddenly lather.”

Azar: Sagittarius
“Your hips will fall open in a pretzel pose and you'll find the carton you once chose.”

Bahman: Aquarius
“A baby will come to you and maybe the access code will fail you.”

Esfand: Pisces
“In Maimi you will thrive and your tulips will open five.”