I think I am in a hard spot to get out of with this one. During this week's premier episode of Whoopi (8/7 Tuesdays on NBC) I tuned in with a surprising degree of anticipation and excitement. After all it isn't everyday that an Iranian is seen on prime-time TV. Especially nowadays.

My hopes raised as I prepared for fellow countryman Omid Djalili to take the stage, I found myself unable to even make a snack for the show. I sat glued to the set, waiting…7:59… when the show finally began, I found myself impatiently looking for Omid (Nasim) to come into view.

Then, suddenly as if it was no big deal, there he was! I couldn't believe it! An Iranian actor had made it to the prime time of television viewing in the US. I imagined as millions of viewers watched the show, thinking what they must be wondering, that an Iranian was being imprinted in their consciousness in a completely different way than ever before. I watched on.

Then came the first punch line, delivered by Omid. He did it so well, I almost didn't hear what he was saying and started to laugh automatically as the laugh track or studio audience it was recorded in front of instructed me to. 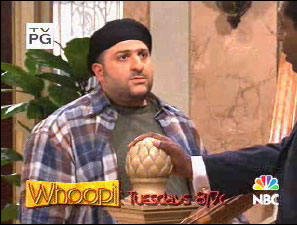 ” I haven't felt this oppressed since the Ayatollah confiscated my beach house.”

Beach house? Ayatollah? “Wait a minute”, I thought, “Who wrote that one?”

My mind raced as what I thought was going to be a fun exploration of quirky Iranianisms started fading right from the start. Before I had a chance to digest it, another one appeared.

” So how did you come to this country?”

” OK,” I thought, “That was a good one. Obvious and slightly lame, but combined with Nasim's smirk quite funny.” Get it? Iran, I-Ran? ha ha Ha!

If you have not seen the show, the premise is that Whoopi Goldberg is a former pop star turned-Hotel owner (Mavis) and Nasim is her Iranian fix-it man or super. While a stretch to bite off on, since most Iranians are educated technocrats or business owners, and I have not met one who would settle for being a fix-it man or super, it is however, possible and I won't dispute it. But it certainly is not the stereotype you or I would choose. Which is strange because this show is full of stereotypes,and it makes fun of them, and plays around them. Then the next punch line.

[Mavis] “Nasim, do you know what you are doing?”

[Nasim] “I'll have you know that I used to work on the Iranian military's most sophisticated missile system…..which we don't have.”

OK, I was back into it. Maybe this wouldn't be so bad after all. But the next one went,

” Why did you come to this country?”

[Nasim] “To be with my friends and relatives.”

[Nasim] “Oh they are spread out all over the country…”

Next Nasim raises a plumbing pipe up in the air off one shoulder and even places his finger near a would be trigger, as if he is holding an assault rifle. The obvious implication and reference being that he is a “sleeper cell” member and is unknowingly reverting to some previously brainwashed mannerisms from guerilla training.

He then finishes his sentence by saying, “…uh…we don't stay in touch much.”

Whoa! Now I'm starting to get a bit pissed. In one quick sentence they just managed to get an Iranian to imply that there are other Iranians in the US as members of some sleeper terrorist army waiting to be activated.

But I placated myself by saying that technically this could be true, even if far from the stereotypical Iranian living here. But I was flushed with anger and trying to keep objective. Maybe it would get better.
Then the next line, 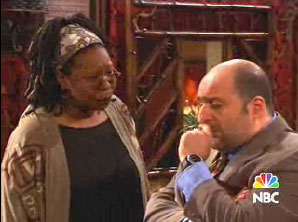 [Mavis] “Nasim! Don't sneak up on me like that! Especially you!”

[Mavis] “I know he's my brother but I wish I could just get rid of him.”

[Nasim] “It's a shame you don't have a secret police, they could come put a bag over his head and take him away.”

” YOU DO HAVE A SECRET POLICE!” I screamed in my head, “IT”S CALLED THE FBI AND INS AND ARMED WITH THE PATRIOT ACT, THEY DO THROW A BAG OVER YOUR HEAD AND TAKE YOU AWAY, YOU MORONS!!!”

This wasn't going the way I had hoped. I tried to keep my mouth shut and watched on.

Then I noticed a slight shift in the show's direction and started to see Omid establish his character a bit, and I can only hope he must have had something to do with this part of the script, because it was suddenly, beautifully poignant. And really funny.

A (stereotypical) white man from Iowa (“I'm sorry, I grow corn.”) commented to Nasim about how hard it must be these days being an Arab.

[Nasim] “Arab? Do I look like an Arab to you? Do we all look like Ali-Baba with giant turbans and pointy shoes?”

After this hilarious tirade, a frustrated Nasim who is being consoled by Mavis says, “But he called me an Arab! I'm Persian! I mean it's SO OBVIOUS!”

Finally at the end, Nasim made what I thought was the statement of the show.

” You know what the problem with this country is?” he said. “You don't know who the hell you are living next to?”

Now I'm not sure if this show will do more harm or good to the image of Iranians or Iranian Americans, or Americans of Middle Eastern descent or Arab Americans or what have you. What it does do is put out for discussion and debate, the caricature of several stereotypes and issues.

The show does seem to want to push the concept of differences and acceptance through Whoopi's frequent statements throughout the show. Simultaneous to the Mavis-Nasim exchanges there is the stereotype of the white girl who talks hip-hop, which I thought was long overdue for someone to call out as stupid. And I did feel better having some of our common grievances aired (literally) for all to see.

But I kind of want to call them on some of the low blows, and I kind of want to give them better suggestions to explore, than what they chose for the first show. But then again, it was just the first show, hopefully they are getting the kinks out, and if Omid is the kind of Iranian I think he is, he will do his best to guide the show a bit more towards the more plausible (and more funny) Iranian quirks.

But remember, after all, LA is LA, and I wouldn't be surprised if the next show had the prerequisite Camel references with the piece de resistance, having him slurrrping a weird looking lunch, complete with sheep's head! YUM!

Book of the day
amazon.com