Many of us felt an overwhelming sense of helplessness on December 26th, 2003 when the city of Bam was hit with a 6.6 magnitude earthquake. What could we possibly do to make a difference to the lives of the survivors? Jila Kashef however, was in Tehran at the time of the catastrophe, and went to Bam along side the other hardworking and committed volunteers from Society For Protecting the Rights of the Child (SPRC).

Soon she was known as “Khal-e Jila” (Auntie Jila) and became a trusted friend to many of the children who found immense solace in the SPRC tents. There they discovered a new home filled with caring people, warm food, books, toys, art supplies and most important of all undivided attention. The SPRC volunteers were there to address the children's needs. They arrived in Bam shortly after the earthquake hit, and are still continuing with their efforts today.

I met Kashef recently and was immediately struck by her energy, sincerity, passion and love for children. She is a child advocate in every sense of the word, and I was truly honored to get to know her. Here is how we started: 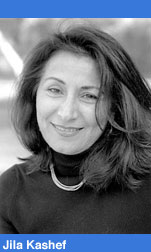 Please introduce yourself, and describe why you joined Iranian Children's Rights Society (ICRS)?

My name is Jila Kashef, I have been part of a computer technical staff for many years in Los Angeles. I first learned about ICRS at one of their fundraisers in 1998. At this event, I learned about the Society For Protecting the Rights of the Child (SPRC) which was established in 1994 by a group of teachers, writers, artists, attorneys, and educators such as Ms. Fakhri Golestan, Ms. Shirin Ebadi, Ms. Shiva Dolatabadi, Mr. Ghalchechian and Ms. Mahdokht Sanati for the purpose of improving the lives of children in Iran.

The event I was attending was set up by the international chapter of SPRC which is called the Iranian Children's Rights Society. The purpose of the evening was two fold: 1) To inform Iranians and non-Iranians about the existence of SPRC, and its goals. 2) To raise funds for SPRC's children's projects.

Coming from a difficult childhood, I understand the pain of children very well, and that is why I believe that giving love and education to kids will change their lives. It is my strong belief that if children are educated at the right time, there will be less crime and poverty in the world. When I discovered this organization and its visionary plans for the children of Iran along with the fact that it is a non-profit, non-governmental, non politically affiliated organization, I decided to join them as a volunteer.

Where were you when the earthquake hit Bam and what were the specific reasons that led you there?

On December 20th I went to Tehran to meet with SPRC. As soon as the earthquake hit on Dec. 26th, a group of five people form SPRC went to Bam to offer disaster relief and emergency help. I went to Bam thirteen days after this catastrophic event to meet with Behzisti — welfare organization — officials in order to determine a means for adopting orphaned children of Bam.

What were the conditions in Bam?

I arrived in Bam, and I could not believe what I was seeing. Children were everywhere wandering the city in fear and shock. No one was focused on them.

What were your immediate objectives, and how did you go about executing them?

The first thing that came to my mind, was to do something for the kids, to make sure they were taken out of those depressing tents during the day. All the NGOs were helping the families by providing emergency supplies, food and medicine. None of them however, had any programs for the children.

How did the children respond to you and the other SPRC volunteers? What were your main accomplishments?

In observing the situation, we realized that the children needed focused attention. We immediately implemented means for them to continue learning and playing, and in the process we did our best to help normalize their lives, and reduce the trauma under these difficult circumstances.

During the three weeks that I was there, I managed to get two small tents to start as a gathering place for children. Within a few hours we had about 20 children, shortly thereafter they increased to 50, and the next day there were 120. Just a few days later we had approximagely 250 children who had registered with SPRC, and at this point, I would venture a guess that the number is over 450.

We were lucky to secure a large 96 square meter long tent from one of the NGOs called Islamic Relief. They also provided us with sleeping mats, plastic furniture, white board and playground equipment. (Many thanks to Islamic Relief)

By day six other volunteers arrived from our Tehran office and started working closely with the children. We encouraged the mothers and people from Bam to assist us in keeping their children busy in order to help them focus on more positive things while the rest of the city was crawling out of the rubble. See photos

The following are some of the things we accomplished:

1) We gathered all the children in tents so that they could have breakfast and lunch together. Thanks to Alabama Disaster Relief for providing warm food. We offered nutritious meals for the children by for example, converting their breakfast from a piece of dried bread and cheese or marmalade to milk, cakes and sometimes fresh fruits.

2) We provided the children with painting materials, toys and books to read. Many thanks to Bonyade Koodak in Tehran, especially Mr. Koohestani in Kerman.

3) We purchased a TV, and a CD player and started showing children cartoons and movies. We acquired a music cassette player and played music for the children. Thanks to Mr. Abbas Ajeli, my dear brother in Iran.

4) We asked different organizations to provide us with children's supplies, such as school bags, shoes, clothes and other necessities.

5) We provided all necessary health and hygienic supplies that included toothbrushes, combs, hair brushes, towels, shoes, warm clothes and all materials needed for school such as story books, painting and art supplies, writing books and other items. (Some of these items were provided by us and some were donated from other NGOs).

6) We started small classes by dividing the children in to different groups and set up painting, acting and singing classes. We gave out awards for best painting and best singing. SPRC volunteers really brought life to this camp. The children were unbelievably happy with our presence there. They didn't even want to go back to their own tents with their parents. At the end of the day we had to force them to return to their parents.

7) Two weeks later we got the permission from the Ministry of Education and started the primary school (Grade 1-5) in our camp. We had about 190 students.

What would you say is SPRC's most significant role in assisting the children of Bam?

As a result of our services, life in this camp has been substantially improved under these severe conditions. The children have become happier and their dispositions have markedly improved. Their mothers tell us that the kids get up at 5:00 AM and ask, “When are we going to school?” Even though we are supposed to start at 8:00, the kids gather around our tent at 7:00 and keep asking us when we are going to begin the sessions.

In addition to child relief assistance, we sent one of our psychologists, Dr. Shiva Dolatabadi to Bam to work with children as well as with the mothers and families in order to assist their emotional well-being and recuperation. We had two days of seminars held in our big tent.

I am proud to be a part of ICRS/SPRC and feel that we are the only effective organization at the time helping in a tangible, organized and calculated manner in order to benefit our future generation. The SPRC volunteers have shown dedication and creativity in providing much needed aid to the children and families here. We are planning to stay in Bam as long as we are needed.

What are your present goals?

We will have fantastic live music by Behzad, including Shahram Fasazadeh, Saman Mahmoodi, Shahriar Behzadpour and also another musical group with Mahvash Azhir and Eric Stein. We are also proud to present traditional Haftsin dancing by Shida Pegahi's Junior Dance Company. Our guest speaker is Nilufar Farnoodi-Zahiri, child psychologist. I will also be there to give you a full report on my three weeks in Bam.

Additionally, our guests will be able to and read letters by children of Bam. You will be amazed by the amount of love and hope evident in all of the children's work. We will also be offering a silent auction filled with excellent buys.

For people who want to help, but are not able to attend the fundraiser, please specify what they can do to assist SPRC/ICRS and children of Bam?

Please visit our web site. We have an extensive list on this page. There are many ways that people can help. It is almost a matter of looking within ourselves and assessing what is our best attribute, and sharing that with the children of Iran. Some people prefer to donate money, and as you will see this choice is available online on our site. Others however may prefer to take an active role by volunteering in our many chapters either abroad or in Tehran.

You are welcome. See you on April 18th.

You can count on me. I will be there.

Interviewer
Zahra Dowlatabadi comes from a long line of stubborn women and non-stubborn men dedicated to human rights and community service. She has worked as an animation producer for studios including Warner Bros., Universal and Disney. To learn more about her, visit producinganimation.com. Zahra is currently directing a documentary for the non-profit organization Program For Torture Victims. She wishes to thank the ICRS web site for permitting the use of portions of Jila Kashef's report from Bam.