Mirfendereski was the Shah's ambassador to the former Soviet Union for most of the late sixties and early seventies. These were the crucial and constructive times between Iran and the former Soviet Union. Upon his return from his post he was appointed as Deputy Minister of Foreign Affairs. A position he held until His Majesty removed Mirfendereski over an incident with the Soviet air force, which I shall describe later.

Mirfendereski had a long and distinguished career at the foreign ministry. He severed in many capacities and in many countries. He was the last Foreign Minister in Imperial Iran, when Shapour Bakhtiar headed the final imperial administration. He was well versed in many languages, including Russian. He leaves behind a wife, also a Mirfendereski and of Russian Noble Lineage (The Jandiri's), of whom the John Deere Company in the US is derived from, a son Guive and two daughters Lily and Shadi.

Now to the reason why I attempted this article: my father told me a story once about Ahmad and Nassrollah Entezam, which for the purposes of recorded history should be mentioned. Although all the participants are except Ambassador Ardeshir Zahedi, are now dead.

During the early 1970's when Zahedi was appointed as Ambassador to the US, the Shah recalled Mirfendereski from his post in Moscow, and appointed him the Deputy Minister of Foreign Affairs. This position was filled by Abbas Ali Khalatbari, who had recently become the Foreign Minister.

During the 1973 Arab-Israeli war, the Soviet counter-part of Mirfendereski, whose name escapes me, contacted him and asked if the Soviet air force, could dispatch a squadron of military, logistic and humanitarian aid over Iranian skies to Iraq. Mirfendereski, upon the Shah's approval, dispatched the acceptance telegram. However, he allowed the Soviets to use more than one squadron for their activity. 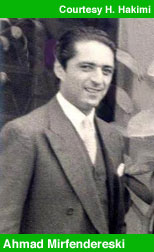 Upon finding this out the Shah, in one of his private audiences, asked bluntly, about the discrepancy and then said; “What will you be when the Russians take over Iran?” Mirfendereski, responded, “Your Majesty, I will most definitely not become the king.” As those who were familiar with His Majesty's psyche know full well, the Shah did not take well to such wit — and Mirfendereski had bold wit.

Soon afterward Mirfendereski was forced into retirement. Nassrollah Entezam then approached the Monarch in defense of Mirfendereski, who was Entezam's close friend over many decades. Entezam, then asked the Sovereign, in French, as the two would frequently converse in that language, what the Monarch had in mind. The Shah then responded that he had told Mirfendereski that the Russians can fly over Iran “Une foit Pour Tout” — “Once and for all”.

Entezam proceed asked, “Certainly, your Majesty doesn't think, Mirfendereski, is a traitor. He has shown his love for Iran and his allegiance to His Majesty.” The Shah responded by shaking his head up and down.

Another story, which was circulating among Tehran's elite, was that when Zahedi was in an audience with His Majesty, he expressed America's dislike for the help offered by Iran, and Iran had to quell this displeasure by removing the culprit from his post. Unfortunately Mirfendereski was used as a pawn.

Nevertheless, this man dedicated the remaining years of his life to writing articles, a book, and voraciously reading historical books, and when he was asked to return to public life to serve his country, like some of his contemporaries, he realized the grave danger Iran would fall into, under organized religion and heeded the call, despite the maltreatment he had received from the Court.

Such is the story of one of those who dedicated their life to Iran, and are departing our midst one by one.