Is this our year?

As we approach what may be one of the most important presidential elections in modern memory, Iranian-Americans have been increasingly concerned and opinionated as to the direction the US has taken. But rather than continue to be camouflaged in fear, Iranian-Americans have become surprisingly energized to participate rather than flee, eager to shed their typical approach to politics, namely sitting idly by and hoping no one notices them, as they reconcile their love for Iran with their love for America, in favor of a kind of participation that one can only call “Remarkably Enthusiastic”.

One example of this kind of participation is a recent meeting which was held with the newly elected Mayor of San Francisco, Gavin Newsom. Newsom as you may know recently shocked the US political establishment of both parties, by literally exploding onto the scene with his controversial, but high-time-it-happened action, allowing gay marriage in San Francisco.

A bold move? Or crazy? This one has left a long list of political analysts and pundits scratching their heads and it will be a long time before it's impact can be fully understood. One thing is for sure, it got the attention of the established political system, that one can safely say, needed a long overdue shock to the system, first just to check if there's any life, then onto resuscitation. Look to Newsom for some interesting days ahead indeed. But onto the meeting.

During the city's mayoral election, one of Newsom's deputy directors of the campaign was a fellow Iranian-American, Ahsha Ali Safai (see Persian Politicos). Now as Deputy Director in the Mayor's Office of Community Development, Ahsha is in a unique position to not only deliver us right to the very doorstep of the dialog in SF but more importantly to also to coach us through the active process with his experience and familiarity with the system.

On May 7, I received the invitation from Ahsha to attend a May 17th meeting in room 201 of City Hall in San Francisco. At first I couldn't believe it. Here was an actual invitation to sit down with the mayor of one of the most famous cities in the world. I immediately called Ahsha to confirm this wasn't some new form of email virus or worse, a mean spirited hoax.

“So what's the agenda of the meeting?” I asked

“Basically, the Mayor wants to extend an opening dialog with all of the major communities in San Francisco, and offer an opportunity for discussing issues. It was a cornerstone of his campaign and he wants to follow through on it.”

Wow! I thought. Did my ears deceive me? You mean there is actually a politician who not only remembers, but follows through on his campaign promises!

As the 17th grew nearer a buzz began to build around the Bay Area as Iranians of note began to catch wind of the meeting and even though many do not live in San Francisco, needless to say, nothing but nothing was going to stop some of the community's biggest and brightest stars from taking advantage of this unique opportunity.

On the 17th, I knocked off from work around 3 so I could get to the city from San Jose by 4:30 in time for the meeting at 5. I figured I would walk around San Francisco if I got there early. As is always the case in the Bay Area, when you plan for traffic delays, there aren't any. I got there at 4 and as I had hoped walked around the plaza. As I did, I noticed the Gucci and Louis Vuitton bags, the smell of perfume and cologne, and the telltale signs of the familiar “Cheshm-o-Abroo”s of fellow Iranians milling about the plaza.

I must now take this opportunity and specifically say that for once, when it counted most, we were actually ON TIME!!!!

At 4:45 everyone began drifting into room 201 in which there was a very large board room table, the largest one I have ever seen. About 30 people began to take their seats, the rest of us who were observing, sat against the wall on chairs provided for the expected overflow.

At 5:05 a tall smilingly nervous Gavin Newsom ambled in and his Irish-American raspy voice began booming hellos as he walked past the length of the table and asking first, was ushered to the far head of the table flanked on either side by Ahsha Safai and Mike Farrah an Arab-American and good friend of the Iranian community, and Newsom's Senior Advisor to the Mayor.

After a brief opening remark and a cordial welcome by Newsom, the scheduled presentations began.

Ms. Nazli Mohajer of the Persian Arts and Cultural Society (PAC Society), started with what I think was the most exciting project to announce. With famed former General Director of the San Francisco Opera and a huge Iranian (not in size, but in stature), Lotfi Mansouri in tow, she broke the news that for the first time a new ballet depicting the epic Shahnameh, “Zal and Roodabeh” was to be performed in San Francisco on January 7-8, 2005. With Mansouri's heftiest seal of approval of the project, Newsom was invited to be the official host. He accepted excitedly. Look for further info from PAC Society.

Next, past president of the Iranian-American Chamber of Commerce (IACC), Javad Mirsaidi offered the pre-requisite statistics on the Iranian community, but with a very smart and important twist, which I thought was brilliant. As he rattled off the usual percentages and average incomes, he did something different, he compared them to the same averages of general Americans. The contrast was much more apparent and you could see Newsom raise his eyebrows several times as he noted the stark lead we have in income and education.

He then did something which I thought was especially ingenious. He respectfully (he actually said “respectfully”), asked the Mayor to consider Iranians for advisory areas of the city, and to further put his money where his mouth was, Mirsaidi promptly placed into the hand of Newsom, several resumes of those who had offered to volunteer in this area. I don't know if Mirsaidi's resume was in that pile, but I hope it was.

Next up was Iranian American Political Action Committee (IAPAC) represented by Susan Akbarpour publisher of Silicon Iran, attending on behalf of her husband Faraj Alaie, a loyal community supporter, and frequent financial sponsor. Alaie was out of town. Alaie is one of those Iranians who would just as soon share a slice of pizza with you (this is a real example) and just plain “gets it”. He knows what needs to be done and does it. I wish more millionaires would take from his example and loosen their wallets along with their ties once in a while.

Akbarpour clearly nervous, stated our concerns with the Patriot Act and its implementation and effect, and outlined the goals and objectives of IAPAC. For those of you unclear, IAPAC is a much needed but basic PAC, something we have desperately needed for a long time. Simply put, a PAC advocates the position of the group of voters it represents, in this case the Iranian-American position, to politicians and policy, by continually lobbying existing policy makers, as well as the more important task of raising of funds and financial support for politician's campaigns. IAPAC helps politicians who are friendly and sensitive to our issues, to get and stay elected. The idea is to count on and call in the reciprocal political favor. Since politics is what makes policy, it ought to make sense to you why we need IAPAC.

Next out of the blue, like an eagle, or a superhero, from far down the table, in swooped Kayvan Tabari, one of the original founders of IACC and a passionate Iranian. He raised his hand humbly, stood up and began to eloquently thank the Mayor for the wonderful opportunity and confirmed the excellence the Mayor was seeing. Tabari is a lawyer in San Francisco and has honed his oratory skills over many years of jurisprudence. It was wonderful to listen to him speak. Tabari was the first advocate and acquired minority status for Iranian-American owned businesses in San Francisco, which has garnered favor and status for many Iranian owned businesses, who owe their city contracts to his efforts. Again, an entirely genuine and ultra nice guy.

Several other questions and comments were made, although lesser, but nonetheless important and all well stated. It was clear an incredibly positive impression was made. Newsom was clearly impressed with the caliber.

And before you knew it, it was done. As a closing surprise, as if he could out do his contribution, Ahsha announced that this would begin as a regular bi-annual event or even a quarterly one as needed!

That's right folks, this was not a token, post election gift. Iranian-Americans have now achieved the once thought impossible, an ongoing regular dialog and invitation to the Mayor's office.

As I exited the hall and made my way out onto the steps down to the sidewalk, with a few Iranians I did not know, we all felt that even though nothing had changed in the space of 2 hours, but in fact everything had changed.

As I dizzyingly contemplated everything, I looked across the street and saw a Gay Marriage rally beginning. To the wonderful sounds of techno dance music, I crossed the street and walked through the colorful crowd of wildly dressed people and seeing their fever for the fight, and their passion for their passion, it all suddenly made sense and for the first time, I could see our future in America. We just have to get our own party started! 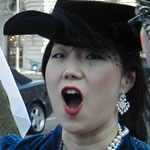 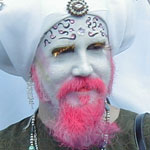 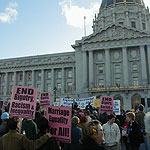