On Sunday October 3rd, as part of it's ongoing pre-election community education series, Bay Area Iranian-American Democrats (www.baiad.org), held its third open discussion forum entitled “What Is at Stake, Why This Is The Most Important Election of Our Lifetime” with Dr. Abbas Milani, a Research Fellow at Hoover Institution and visiting Political Science professor at Stanford University as the keynote speaker. 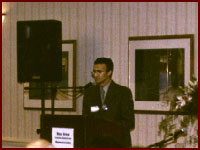 Mehrdad Moayedzadeh, president of BAIAD and Chris Urkofsky, a BAIAD officer were the first two speakers. Moayedzadeh emphasized the importance of Iranian-American participation in the political engagements and reminded the audience that without assuming an active role in the electoral process, “there is no reason for any politician to protect the interests of our community.”

Milani reiterated the goal of BAIAD, which is to empower the political voice of Iranian-Americans through grassroots activism and tangible gains at the ballot box. Moayedzadeh announced public service programs by BAIAD to provide informational meetings on statewide initiatives and phone banking operations to get out the Iranian-American vote on November 2nd. Urkofsky then drew a distinct picture of concept of progressive thinking and paraphrased James Madison by saying that “America does not guarantee justice; it just gives its citizens an opportunity to afford it.”

Dr. Milani stated, “Iranian-American Diaspora enjoy enormous economic and professional success in scholarly, medical, technological and business fields. However, the economic success has not translated to political power and such disparity is not realistic; therefore it would be unfathomable to comprehend a static picture and we should expect a major stride by this community to have its voice heard. The impact of greater participation by the potentially powerful Iranian-American community will have far reaching effects both here and abroad.”

Milani further explained that a second term Bush administration will have dire consequences not only for Americans, but also for the entire planet. He characterized the upcoming election as the “world election” where economic, political and social well being of the world community is at stake. “The second term for Bush will move the tenuous mandate of the first term to a new level that will translate to loss of fundamental democratic values in American society.” 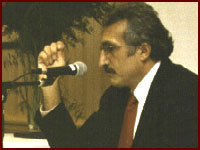 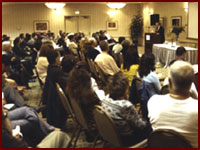 Dr. Milani presented two faces of the current Republican administration that are worthy of a closer look. First, the religious face, which is threatening the genius of the American political system, namely the unreachable divide between church and state which combined the enormous moral piety with an accountable system of government. Evangelical Christians as the religious base of the Republican Party are gaining strength and will use their clout in the second term to influence the political process and reshape the judicial system, apply pressure on religious minorities and thus undermine democracy in America. Second, since Franklin D. Roosevelt, every American president with the exception of Ronald Reagan subscribed to the concept that it is a role of the government to provide basic social services and security to American citizens; the notion basically supported a “welfare state” that granted basic economic rights to its weakest members.

Realizing that a direct attempt to go against such system would be politically quite costly, the Reagan Administration took on an indirect strategy referred to as “starving the beast”, which is a euphemism for making the government incapable of helping society's neediest by making sure that it doesn't have enough resources to do so. Bush has continued this process by a policy of cutting taxes for the rich and engaging in expensive preemptive military adventurism to unprecedented levels such that the government will lack the physical capacity to sustain a viable social system.

According to Milani, “No matter who gets elected as president, “the war on terror” as well as the question of dealing with Iran will be top priorities of the next US government. The Bush administration does not realize that to be successful against terrorism, military prowess plays a minor role and that most of the energy should be devoted to education and propaganda; to fight terrorism, one has to dry the sea that terrorists thrive on. And such sea is nothing but despotic regimes, anti-American sentiments and disillusioned masses in impoverished nations.” Milani suggested that expansion of democracy and improving economic conditions in the Middle East will go a long way in stopping the growth of terrorism. 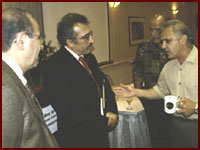 Dr. Milani criticized those Iranians who advocate attacking Iran for the sake of regime change. He cautioned that no matter who gets elected, Iran will not be attacked since US lacks the resources to take on such a dangerous and “foolish endeavor”; “We should remember that after the 1953 coup, the Shah lost the legitimacy to lead Iran and was rejected by Iranians.”

Milani also dismissed as “unlikely” a US or Israeli strike against Iranian nuclear facilities since such undertaking will not bring tangible results and only intensifies the tension in the region, especially at a time when Iran's influence in Iraq and America's need to use that positively is rather evident. “In addressing the Iranian issue, America has to bring Europe, China, and to an extent Russia, on the same page to be successful.” “Kerry,” he argued, “has a better chance of achieving that goal and that may result in reaching a grand bargain with Iran.” Milani stated, “The problem is that the US has not had an articulated “Iran strategy” since the days of Nixon. The lack of a consistent policy and a solid strategy has led to mixed signals and failed policies over decades. It is time to realize that imposing embargo on Iran has only benefited some of the European countries as well as opportunist elements within Iran at the expense of the Iranian people and US companies.”

Dr. Milani concluded the meeting by asking Iranian Americans to watch for media bias and question the information they receive from TV, radio and newspapers. “That is the only way to remain objectively informed and make better citizenry.” he said.

About
Hamid Karimi is a volunteer at BAIAD (Bay Area Iranian American Democrats) BAIAD is a grassroots political organization that stands for protecting the rights and interests of Iranian-Americans by empowering the Iranian-American political voice. BAIAD seeks to promote social justice through political participation, grassroots activism, public and political advocacy, and education. To learn more about BAIAD, please visit: (www.baiad.org)