A Game of Backgammon 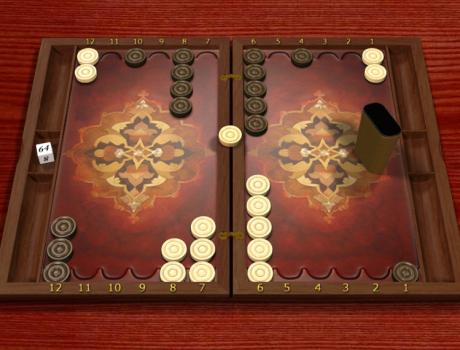 A Game of Backgammon: Or Clash of Cultures
Based on true events

As soon as I opened a table, a player beeped and the game started.Right at the very beginning my opponent raised the stakes and challenged me to follow suit.I refused and later in the game I doubled only when I was ahead.

In the middle of the game, he opened where he shouldn’t have and sure enough I hit him.

I didn’t respond as I sensed the sarcasm in his remark.

A few minutes later, he wrote: Can you possibly play slower than this?

I didn’t respond to this comment either because I consider myself a peace loving Iranian living in US. I just wanted to enjoy the game. When I got way far ahead in the game, I doubled the points. Not only he accepted but he doubled the stake out of spite.

He commented: You are a chicken.

Now I was baffled. How could he possibly know what kind of bird I was?Why a chicken and not a turkey or an ostrich for that matter?His wrong assumptions led me to believe my opponent was an uncultured individual, the type I don’t care to be associated with.

Another message came: I’m going to kick you’re A$$.

I kept my calm and let him kick my Dollar signs!

Then I rolled a much needed shish o besh (Six and five) and covered two of my lats (opened positions) and blocked him in.As we Persians say, “as koon shance avardam”. This expression literary means, “I pulled luck out of my ass”. Please note that only we Iranians are capable of pulling luck out of our asses. This is one of our unique cultural virtues bestowed up on us by the lord almighty himself.

Right after pulling luck out of my butt I raised the stakes and my taunting act sparked a clash of civilizations.

He immediately commented: F#%& you.

I didn’t understand this string of characters yet I had a feeling it could not mean anything good.

I wrote: Khafeh sho. At this point I decided to write my comments in Farsi to have a little fun.

This expression can be loosely translated as shut up. However, please be advised that “Khafeh Sho” literally means “Be strangulated”; therefore is a more drastic measure than “Shut Up”. One can shut up and still breathe and have a normal and productive life but the victim of the “Khafeh sho” cannot breathe as all his major air passages are intentionally blocked to cause complete suffocation. The victim in this case will permanently shut up! One may logically classify the “Shut Up” as a misdemeanor and the “Khafeh Sho” a criminal threat.

He wrote: I don’t understand.

I wrote back: “Be bayzeye chape asbe hazrat abbas keh nafahmidy” which literary means: “To the left testicle of the disciple Abbas’s horse that you didn’t understand.”

For the sake of brevity, I don’t further explore the significance of the testicle in male anatomy or the historical roots of this sweet Persian expression. However it must be noted that this complex profanity entered into our language after the rise of Islam in Iran about fourteen hundred years ago. Zoroastrians didn’t believe in verbal abuse let alone utilizing the horse’s testicle to do so. It must have come to our country by Arabs.

He then wrote: What an exotic language. Are you from Romania?

I didn’t respond. I was still preoccupied with my joft shish. (double six)

He continued: Are you a female?

Now he was trying to get in my pants! As flattering as his comment was, I just wanted to be left alone and enjoy the game.

So I responded: Che gofti? “What did you say?”

He wrote: Are you writing in Hebrew?

I wrote: Nagoftam khafeh sho? “Didn’t I tell you to shut up?” I was trying to avoid a confrontation.

He wrote: My name is Dick.

This man’s name was an offensive slang for Penis in America for crying out loud, even his name was obscene.

Unfortunately, explaining the “folan folan” portion of this ancient curse for western readers is a challenging task. This truly fascinating Persian curse is the most polite way of calling an adversary the worse names one can ever imagine.

“Folan” is user friendly and lethal Persian auxiliary cuss word. There are two “folan”s in this curse. The first “folan” may easily be replaced by the name of the person you wish to insult such as one’s mother, sister or wife and the second “folan” is the code word for the most bizarre sexual acts you wish to perform on that female relative of his.

Native Farsi speakers usually upgrade this curse by adding the third “folan” to achieve a higher level of filth in this timeless jewel of vulgarity.The enhanced version of this curse allows you to offend all your target’s female loved ones, his place of birth and his occupation in one shot. If carefully crafterd this filthy curse can insult up to six generations of your foe by adding a few more “folan”s. The global reach of this shit is truly astonishing.

Needless to say that our rich and sophisticated culture flourishes our creativity when it comes to cussing. This aspect of our cultural identity may be attributed to our long and painful history that has given us ample reasons to curse. However, if you are not an avid Farsi speaker, please do not try this curse at home on your family members.

Regrettably, due to our cultural disparity, my opponent was not capable of absorbing the essence of my comments. “DICK” in my latest comment was the only word he understood!

He then joyfully wrote back: Yes, Yes I am D I C K.

And added: ENGLISH. YOU MUST SPEAK ENGLISH.

In Internet chat rooms comments typed in Capital letters are considered rude as if the writer is shouting. What Dick didn’t understand if I didn’t know any English, then screaming in English wouldn’t help either, would it?

I politely responded: Be koon laghet khandidi, “you laughed at your own wobbly ass.”

Unfortunately, the history and the cultural origin of this beautiful slang are unknown to this writer. “Kiss my Ass” might be considered an English equivalent of this expression but I like Persian version better for logistic reasons. He could conveniently laugh at his own ass in the comfort of his home versus kissing mine on the Internet.

He then wrote: You are not assimilated.

This comment reminded me of the two American think-tanks Fukuyama and Huntington who also emphasized on the necessity of immigrants’ assimilation in American society. They argued that none-assimilated immigrants are potential threats to American culture.

We could easily relate based on our common interest on the Internet, but DICK was not cooperating and the clash of civilizations had already started. Yet as a cultured individual I refused to accept that it was too late for Dick and I to reach a common understanding. I was compelled to “assimilate” just to send a powerful message to my opponent.When the game was over and after I beat him badly, I sent the final words in a language surely he could understand.