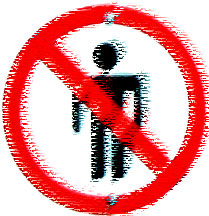 I appreciate and admire what Iranian.com is doing in creating an open community for Iranian writers to express and write their views without any censorship and so on. But there is a small something that stings me down below the times when I go to Iranian.com and read about women’s rights in Iran and their hard fight for justice and natural given right to equality, and that is the little green texts over the headlines.

I will give you a recent example which was written on the left column of iranian.com’s front page (there have been other examples as well):

Shame on all men? All men? Alright. Listen you, the guy or girl who writes the little green text. I’ll call you the “green-text dude/dudette”.

First of all, when I look at pictures of our sisters getting hanged because of (what I would call) small crimes or no crimes at all, or beaten because they express their rights in the streets, I can always recall the FEMALE Iranian police in a full chadour outfit running after them with sticks and batons, or putting the rope around their necks before they get hanged.

Second of all, you green-text dude/dudette, there are plenty if not overwhelmingly support for women to have the same rights as men in Iranian society amongst the male population in Iran and abroad. I dare you to take a pen and paper, walk out in the streets of Tehran, and ask guys if they do or don’t support such a change. I promise you that you will be surprised. Also, I can recall plenty of pictures of male students being beaten because they have participated in protests for reforms.

Thirdly, why should I (someone with a pair of testicles btw) be ashamed when I fully support them and every women’s rights movement in the world? Are you saying all Iranian guys are guilty because what a minor group of religious fanatics are doing?

Little green-text dude/dudette. I’m wondering if your not Bita — that Persian woman who got dumped by some low-life Persian dude, got her certain parts touched in Tehran (her words), then analyzed Persian rap and somehow came to the conclusion that German guys are hot and Persian guys suck, in her article here on Iranian.com.

Alright that was cruel. But listen little green-text dude/dudette (and other Iranian man-bashers): my point is that discrimination and generalization can go both ways, the moment you start generalizing all Iranian men to be supporters of the hanging of young women and so on (and singers of bad rap music)… is the moment your opinion truly stands for double standards, and nothing more.

I may be overreacting, but feminism is one thing, man-bashing is something else