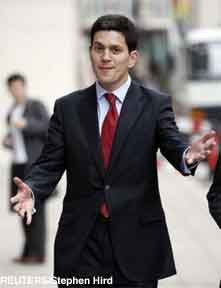 David Miliband, British foreign secretary, confirmed in an interview with the Financial Times, 8th July, that there is no evidence of Iranian complicity in instability in Iraq or attacks on British troops:

Asked by the  FT,  “What do you think of Iran’s complicity in attacks on British soldiers in Basra”?, Miliband’s first response was,

“Well, I think that any evidence of Iranian engagement there is to be deplored. I think that we need regional players to be supporting stability, not fomenting discord, never mind death. And as I said at the beginning, Iran has a complete right, and we support the idea that Iran should be a wealthy and respected part of the future. But it does not have the right to be a force of instability”.

However, prompted more closely, “Just to be clear, there is evidence?”, he replied, “Well no, I chose my words carefully … ”.

This confirmation came in the context of an implied accusation or a not so subtle suggestion of Iranian role in the instability in Iraq which seem to have stimulated the question “There is evidence?”, to which the reply “Well no … ”, a possible  disappointment, was nonetheless crystal clear, THERE IS NO EVIDENCE.

Contextually, this important admission by the British Foreign Minister of absence of any evidence linking Iran to the violence and instability in Iraq was preceded by the discussion about Iran’s nuclear programme and Britain’s readiness to impose another set of punishing sanctions on Iranian people, for Iran’s non-compliance with the security council’s resolutions which have no basis in international law, imposed on supposed suspicions for which again THERE IS NO EVIDENCE.

This confirmation of the absence of evidence was then followed by yet another confirmation that Britain is leaving the military option “on the table”, on pretexts for which THERE IS NO EVIDENCE, either of Iran’s breach of non proliferation rules or its threat to international peace and security.  This confirms that despite a change of faces and make up, Britain continues to tow the American foreign policy and is in danger of being dragged into another illegal and immoral war, contrary to the will of the British people, and contrary to the evidence of its own finding.  Jack Straw rejected as madness, any idea of military attack on Iran.  Yet, Miliband left the option adamantly on the table.

This keeping open the possibility of British participation in a US/Israeli war supports the assumption that the transition from Blair to Brown is significant, not from the point of view of any fundamental difference between Blair and Brown and their respective cabinets, but because it is an expression of popular opposition to Blair’s warmongering and servitude to American foreign policy.

This is a victory for the popular opposition to war and will remain a victory only if understood and carried in that same spirit of demanding that Brown government rejects and opposes the military option against Iran; that it rejects the sanction resolutions which cause Iranian people immense suffering, and as with Iraq, are used as a pretext for war; and demand that the British government uses any influence it might have on the US administration in support of the pursuit of bilateral dialogue between the US and Iran without precondition.

The Financial Times itself did not linger on the admission by Miliband of absence of evidence.  Relevantly so, two days previously the FT published a story alleging Iranian government’s cooperation with Al-Qaeda using Iranian territory for launching anti-coalition operations in Iraq, without any evidence.

Across the mainstream media the response has been uniform silence.  This revelation should have been greeted with relief and welcomed by those in Britain and the US who are genuinely concerned about the tragedy that this illegal invasion and occupation has brought upon the people of Iraq, the security and moral implications for the people of the US and the UK, the welfare and safety of the coalition troops and the establishment of peace and security in Iraq and the Middle East.

Considering the orchestrated chorus of the war media finding shadows of Iranian culprits at every corner, from Palestine to Afghanistan to Iraq and beyond, sabotaging the ‘noble efforts at establishing  peace, security and democracy in this dangerous region’,  these warriors of the clash of civilisations have not found the absence of evidence of Iranian complicity in the violence in Iraq newsworthy!

Neither has the 8th July Associated Press story of the released audio tape from Abu Omar al Baghdadi, the leader of an al-Qaeda umbrella group in Iraq, has elicited any response from the US government, or particular interest and analysis in the media.  In this audio tape, Baghdadi, allegedly, threatens to wage war against Iran unless Iran stops supporting the Shiia government in Iraq, and declaring that “his Sunni fighters have been preparing for four years to wage a battle against Shiite-dominated Iran”. This absence of interest in the media, in the wake of the recent flood of propaganda accusing Iran of complicity with Al-Qaeda is remarkable in its degree of cynicism, not just towards Iran but towards genuine desire for peace and security internationally.

The US, with its army briefing of 2nd July by Bregadier General, Kevin Bergner, who made wild and serious accusations about Iranian complicity in anti-Us insurgency and its collusion in killing the US servicemen, has understandably remained silent!

Because of course, both the confirmation of Iranian non-involvement in the violence in Iraq, and the Al-Qaeda’s alleged intention to wage a war against Iran should Iran continue to support the Iraqi government, debunks the myth of Iranian involvement and investment in the continuing instability in Iraq and exposes the alliance of interests between  the US and Al-Qaeda around their deep hostility towards Iran.

For those with a genuine desire for peace, this clear confirmation of the absence of Iranian involvement in the violence and instability in Iraq would have signaled a better prospect for establishing security in Iraq, and a better prospect for a successful withdrawal of troops.  This would have also indicated the possibility, at least as far as Iran’s willingness is concerned, for a fruitful outcome for the bilateral dialogue between Iran and the US, the consequences of which are far reaching in terms of prosperity and security for the people in the region and for peace and security internationally.