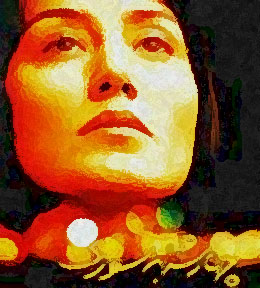 Ever since I saw FIREWORKS WEDNESDAY I have found myself increasingly discovering various layers of subtexts finding their way into my curious and analytical mind.

Never before had the Iranian screen seen such fine performances as that of Hamid Farokh Nejad. If there was no improvisation involved whatsoever, then I have never seen such organic responses on screen or stage by a male actor.

A psychological thriller? Hitchcokesc? Innovative? A social commentary? A non-judgmental account of life stories running parallel to each other?

Or perhaps all of the above.

The details in the script, weaving patterns of a flawless puzzle, are all indicative of the first-quality genius thinking behind the project.

It's just right: not exaggerated, nor underplayed.

The result? Characters are believable, as is the story line. What's more, Farhad Ghobadi keeps us on the edge, as we continue guessing back and forth right up until the end. There is even a big surprise that will bite you on the throat as you cry out in amazement.

One could say that a new wave has been born in the Iranian cinema.

Banal farce, integrating linguistic elements that reinforce the “genre”, could be hilarious.

The story of Marriage Iranian Style centers around a specific social class in Iran, one that is so traditional, they don't even speak modern Persian. Rather, everything is expressed by way of riddles, adages and expressions that perhaps our great-grandfathers could identify with. This is not a flaw. In my point of view, it is one of the assets of the script: it keeps it uniform throughout the story, shapes our understanding of who these people are, and sheds light on the skillfulness of the screenwriter and his understanding of our linguistic subtleties.

What makes the film fall flat on its face is the over-extension of Agha Jaan's lack of tolerance. There are instances throughout the film when prejudice takes form of utter rudeness (something that has no place in Iranian culture, particularly when someone is visiting one's home).

This was particularly true of the ending: Agha Jaan's lack of understanding of Photoshop, believing a montage that involves celebrities, felt as though the audience's intelligence was being taken for granted.

Despite all of this, one must appreciate the difficulties Iranian filmmakers face in terms of censorship rules and the hurdles they have to overcome to make the film they had intended. Almost always, somewhere along the way, they sacrifice a great deal so that perhaps a fraction of what their original idea was is distributed and seen broadly.