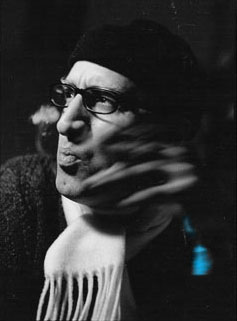 It was 2003 I had put my few months old daughter to bed and was browsing through Iranian Times when I came across a collection of poetry. The poems frustrated, angered, and amazed me at times. The collection titled “One Should Not Sleep with Juliet and Not Be Romeo,” and the poems were simply incredible.

I followed his works and a few years later included some of them in the Other Voices International Project. It was then that I received e-mails from some American poets who believed they were the works of a literary genius. This voice belongs to no one but one of the most controversial contemporary poets of our time, Naanaam.

The multi talented artist is also the writer/director of the documentary, the Tale of Two Nazanins. In 2006 he approached the Iranian-born former Miss. Canada, Nazanin Afshin-Jam, for this documentary, which helped save the life of the 17 year old Nazanin Fatehi who, at the time, was a minor on death row in Iran. Nazanin Fatehi’s crime was killing one of the three men who had tried to rape her!

On May 2007, Naanaam was short-listed to take part in Live Earth, an event funded by Al Gore on climate crisis. It took place simultaneously in 7 different countries on 7th of July, 2007 and was viewed by approximately 2 billion people around the world. This year he was also chosen by the prestigious Sundance Institute to participate in its 2008 Sundance Filmmakers Awards.

This Iranian-Canadian writer and filmmaker is the winner of 24 international awards for his movies. Last night I watched a Public Services Announcement (PSA) made by him. It is called “How Would You feel in a Different Skin?” and it’s on racism against the Roma minority in Eastern Europe. It is a powerful piece. You can watch it here.