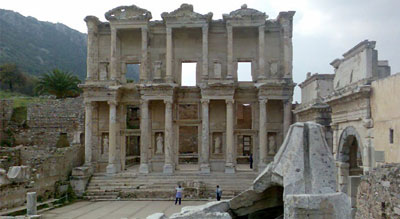 Since recently you posted an article about Turkey, which turned out to be only about Istanbul [“East meets West at their best”], it gave me the idea of writing about my travels outside of Istanbul. As it happens, I am busy planning my next trip to Turkey. It will be my third. The first time, I only visited Istanbul and was very impressed. So a year later, during the non-touristy winter time I went to Turkey again, but this time to see the Roman Ruins of Efes.

My experience is that Turkey, outside of the Sultan Ahmet touristy area of Istanbul, is a mix between the Third World and the Western World.

In my second journey, I arrived at the airport of Izmir at night time. Usually when you exit customs in any major airport, there is an information desk or better yet an official government tourist information office. In the worst case, signs in English directing you to the buses or trains going to the city center. Well, none of that in Izmir airport! Do you know how I got downtown? A Turkish girl sitting with me on the plane saw that I was peeing in my pants and told me I can come with her. Her brother picked us up in his car.

On the way to the city center the car goes through the residential neighborhoods which look depressing, sort of like the low-income, crack-smoking dormitory towns in California. Nothing touristy I can assure you. I am dropped off in a downtown street that is uglier than hell. No trees or anything and no monuments — just a street busy with cars. My guess is that it would look like the downtown Mission St in San Francisco in San Francisco where the warehouses are, except with heavier traffic and much dirtier. So far, so depressing!

Then, lots of walking and asking around trying to find an affordable hotel which eventually I did. As usual when showing my documents I always get the freaky semi-disgusted look of the receptionist saying: You where born in Iran?? The room was great though. I love watching Turkish music videos in my hotel room. My favorite Turkish artist is Yalin. Then I was ready to stroll around town.

I asked the receptionist if they had a map. Answer was no. Can they draw me a map showing me where the hotel is, so I can get back. The answer is another no! Do they know which way is the port? Finally a yes. After walking for a long time thru a rather ugly main street that had nothing but 99cent plastic goods stores, and going under a depressing roadway underpasses, I ended up in the port area which is known as Konak. I see the water, but wait, where are the ships?? I can’t see any! Why? Because there is this thick ash-like smog that doesn’t let you see beyond 10 meters. In their rush to modernize, they built a big freeway right by the waterline, ruining what could have been a more pleasant view! >>> Photos

Finally I got to the historical Clock Tower (Saat Kulesi) and the Konak Camii Mosque. The next day, I kept asking for the tourist office that was listed in my guide book. No one had heard of it or the street it was supposed to be on. The policemen similar to those in Egypt seam to be there only for decoration. They do nothing except talk with each other.

There was a fortress on the hill above the town and I went to see it, but it was very poorly kept. My next stop was the bus station where I had to take the bus to the town of Selcuk. The bus station or Ottogar as they call it was way out of town in the middle of the dessert with no vegetation surrounding it. Thank God it didnt occur to me to walk there. It was this big impersonal ugly building.

Once inside, I was hoping to find an information desk. No such thing, instead there are 100’s of little offices, one for each bus company. So how can I find out which bus takes me to Selcuk? Play the guessing game: Go thru the 100 offices until someone is nice enough to tell you the answer! If you have to go back to downtown, its not fun either. The exit to the bus station faces a busy parking lot with absolutely no indication as to where you need to go.

To go to downtown Izmir from the bus station, first you must take a deep breath and cross the parking area toward the uncovered section and you’ll spot a sleepy lineup of buses, known as dolumuses – none of which will take you where you want to go. Instead, get in line before you cross that last street to the dolmus stand and wait for an antique sedan (possibly bright red) that will stuff in the first few people waiting in line. Expect an excruciating half-hour ride through the exhaust fumes of those ahead of you.

After Izmir I visited the ruins of Efes, which are vast and much better preserved than what is left in Rome, Italy. It was great seeing it in winter because there were rather few people (in summer it is overcrowded). From there to Kusadasi that is a beach town with Roman fortresses. Now, it looks more like a German tourist town. A long overnight bus ride took me to Istanbul. Sultanahmet area of Istanbul is pretty, but the outskirts of Istanbul are depressing and not nice at all. Impersonal apartment buildings amongst dusty areas, little vegetation and nothing historical to see. It took the bus 2 hours of driving thru the outskirts to reach the bus station >>> Photos