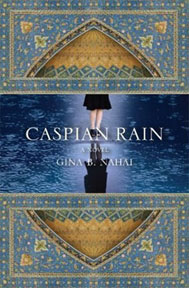 Excerpt from CASPIAN RAIN by Gina B. Nahai (MacAdam Cage, September 2007). From the best-selling author of Moonlight on the Avenue of Faith, a stirring, lyrical tale that offers American readers unique insight into the inner workings of Iranian society. In the decade before the Islamic Revolution, Iran is a country on the brink of explosion. Twelve-year-old Yaas is born into an already divided family: Her father is the son of wealthy Iranian Jews who are integrated into the country’s upper-class, mostly Muslim elite; her mother was raised in the slums of South Tehran, one street away from the old Jewish ghetto.

FROM THE STREET, all you can see is the red brick wall that surrounds the garden, the giant mulberry and persimmon trees, and the top floor of the house, which rises higher than the wall. Inside are three bedrooms, a living room with a gold-leaf painted ceiling, a dining room with a round balcony that overlooks the yard. There are porcelain tubs in the bathrooms, a fireplace in the kitchen, sunlight everywhere you look: all the doors, even the one leading into the kitchen, are made of etched and mirrored glass. They reflect not only the inside of each room and the light from all the windows, but also the images cast in the other doors — creating an endless echo of shapes and colors that go on for as far as the eye can see.

Bahar walks through the house with her arms stretched out like wings, makes pirouettes under the skylight in the hallway, puts flowers on the mantelpiece and on the side tables next to her and Omid’s bed. She walks with Ruby — the maid who is married to Hassan Agha, the chauffeur, and who gives him more grief than any one person should have to endure — to Drug Store — the newly opened market on Persepolis Avenue where you can find the latest in imported American goods. She buys Revlon nail polish and a subscription to a pirated translation of Les Misérables that will be delivered to June Street in weekly installments by a young man with light blue eyes and a Turkish accent.

She sets a table with new china and lace, wears high heels and a short dress, sits down with Omid for their first home-cooked meal. They’ve been married a week.

She tells him she can’t wait to see her family members’ faces when they come to the house to visit, can’t wait to tell her friends about her new life when she goes back to school next fall. She says she’s going to study hard and be a good wife, she’s confident she’ll get admitted to university even though the entrance exam is designed to keep out all but the smartest and most hardworking students. She says she’ll make Omid proud.

“I don’t know what you mean,” he interrupts.

“I mean I’ll do my best in every area,” she explains enthusiastically.

“I’ll be a good wife, so our families will be proud of us.

He interrupts her again. He says there’s no question of her going back to school, or going to university; she’s going to be his wife, stay at home, tend to her responsibilities, and do whatever it is that wives are supposed to do.

He tells her he really has no intention of having her “people” come to their house — they serve no purpose, he says, bring no social or economic ties that could be of use, they’re ghetto folk, that’s all, and best left there.

She’s still smiling when he says this, because she hasn’t had time to interpret the hardness in his eyes. She hasn’t seen what has been obvious from the start, and now she’s stunned by what she hears, by the stern expression with which he utters those words — I’m going to say it once and only once, open your ears and learn quickly. He goes back to eating his rice.

She draws a breath from somewhere far away and mumbles through her astonishment, “I’m going to be a teacher.” He keeps eating as if he hasn’t heard her at all, or heard something that doesn’t merit an answer.

“I’ve always wanted to be a teacher,” she says.

It occurs to him that she may not be the kind of girl who’s easily “trained,” who surrenders a fight. He thinks about the day he saw her on the street, how she had stood, impervious, before the driver and his barrage of insults.

“You’re going to be my wife,” he answers, and hopes she’ll understand the definition. She doesn’t.

He frowns now and puts his fork down on his plate, wipes his lips with the napkin on his lap, and pushes his chair away from the table.

“You’re my wife,” he says. “You’ll make your own family.”The finality is his voice makes her shudder.

“We’re a modern couple,” she says. ”We can do things differently.”

He looks at his watch and wonders how much longer this dinner should go on, when it will be proper for him to get up and go read the afternoon paper in his study.He tells Bahar he has never thought about being part of a “couple,” and isn’t about to consider it now, or he wouldn’t have selected a girl so different from himself in upbringing and background.

He sees the devastation that his words have brought to Bahar and is surprised to find that he’s moved by this. He wants to tell her it’s going to be all right, things will work out one way or another, but he knows this would be a lie, she’s in for a rude awakening — this girl who has never left South Tehran but who dreams of Caspian rain. For now, he decides not to engage her in any more conversation, tells himself, what’s the difference, he’s already married her, she’ll just have to learn the ways of civilized folk and become a person he can take with him to parties.

But she won’t give up.

“I thought I’d finish school,” she says, and her obstinacy makes him shudder. “I’ve promised myself I’d become somebody.”

He glares at her. As moved as he is by her vulnerability, Omid can also feel his own helplessness grow larger.

“I want to become someone,” she says again, and this is more than he’s going to put up with.

She sits at the table with her red painted nails and her dark eyelashes. She’s staring at the roses she has cut that afternoon, thinking about the meaning of what has just happened, and already, you can see the light fading in her eyes.

AFTER HE’S MARRIED, Omid looks for Niyaz everywhere he goes. He finds himself accepting invitations he might otherwise have turned down, arriving early and staying late on the off chance that she might walk into the place as she had walked that day into the store. Every once in a while, he hears her name mentioned by women who utter it in awe, or by men who despair because they know they will never so much as lay a finger on her. He stops at the Aramaic Brothers’ store whenever he’s in the area, and they know why this is, know he has come to find out if she is in town and staying at the hotel, and so they give him the best advice they can — this one is beyond reach, my friend, who can compete with that lover of hers? And maybe it’s best this way, maybe some things should stay out of reach.

Omid believes them, but he can’t stop himself from searching. He takes Bahar to most of the gatherings he is invited to — they’re newlyweds, and she’s eager to go along, to meet everyone and make friends — but she only manages to embarrass him with her lack of sophistication, the small and large differences that exist between her and the other wives. She wears the fancy dresses and shoes she has bought with his money, but she lacks the poise and the elegance to carry them off, moves more like a schoolgirl at recess than like a lady holding court. Her skirts wrinkle the moment she sits down, and her makeup is either smudged or too heavy, but it isn’t only her appearance that gives her away; it’s something deeper and more difficult to define — a certain zeal she has for things in general and for Omid in particular, a fervor she demonstrates for being with him, not only in person but also in spirit — we’re a team, you and I, and together we are going to build a life more beautiful than anyone has ever lived. It’s as if they had never had the conversation that had so disappointed her; as if she had no inkling of what he plans for her, or how little he’s prepared to give her.

She’s too enthusiastic when meeting new people, too expansive in her praise of them. She shares her thoughts about Omid and their marriage with the other women at the parties they go to, stands with them as they smoke and drink and smile absently at her over-the-top excitement, or at the many stories she tells about her strange relatives and their substandard lives — tells them, one can only assume, because she doesn’t realize how strange her people are and how bad they make her look. That’s lovely for you, my dear, very quaint, the women condescend, but Bahar can see the disdain in their eyes, so she becomes deflated and confused and aware that she has extended herself too much and in vain.

Still, it doesn’t occur to her to keep a distance from those women, to learn to treat them with the same cynicism with which they treat each other. She won’t stop talking about her family as if they were people she should be proud of, won’t stop heaping praise on her inlaws as if they weren’t aware of their own perfection. She’s innocent and sincere — yes, willing to help anywhere she can, to forgive a snub and respond with kindness because that’s what people do when they’re from the ghetto or barely out of it; they expect to be snubbed — and this may be a quality that would be forgiven in another time and place, but among Tehran’s new elite, who have forgotten their own ghetto past too well, it only provokes condescension.

Your friends’ wives look down on me, she tells Omid in the car as they ride home from those parties. Her voice then is small and bewildered, and she tucks her hands between her knees when she speaks, looks down at her shoes like a fourth grader before the school principal. They don’t think I measure up, she says, and Omid knows this is true.

She’s a good girl, and she means well, but he can’t really blame the other wives: Bahar’s behavior makes her an automatic target, and at any rate, none of this concerns him, really, all he wants is for her to fade away and leave him to deal with his own frustration over having wasted yet another evening looking for Niyaz. So he throws a tired glance at Bahar and offers the only bit of wisdom that comes to mind: Don’t try so hard.