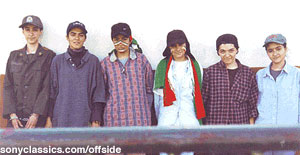 One Sunday, I had the distinct hal-geery to attend a benefit screening of “Offside”, the controversial and noted film by now-famed Iranian filmmaker Jafar Panahi (The White Balloon; The Circle, Crimson Gold). As advertised, the film is about 5 young women who try to sneak into the Azadi (Formerly Aryamehr) Stadium to watch the famous match between Iran and Bahrain that led to Iran qualifying for the 2006 World Cup. Resulting in a dismal first round elimination of Iran on the World Stage of Soccer, subsequently, summarily, forthwith, tout suite.

The 5 girls are of course, caught and detained in a makeshift pen, against a wall just outside one of the seating sections of this now massive monument to oppression. Each girl is beautiful, all of them uniquely dressed as boys, the way they intended to get past the ticket gates and get in to see the game. We spend the rest of the film watching them whine and plead with the guards to let them go, as they agonize over their inability to see the match. One of the girls is handcuffed through the entire film.

This film has been more often referred to as “documentary style”, but I am thinking that this is simply another way to excuse yet another Iranian film with poor production values. Something that I think we should stop starting now. Today it is possible, nay, even cheaper, to use one of the many available pirated copies of Final Cut or Premiere easily available on that $5 Software CD in Tehran, and armed with even the simplest digital video camera, and a used copy of “The Idiot's Guide to framing your shot” even my Ammeh can shoot something evocative.

So forgive this next comment about how I'm just not willing to buy anymore of the incessant use of black background with hand written titles in white Farsi. It's not evocative anymore, it's uncreative.

In this copy of this film that I saw on this screen, there was a lot of jumpy editing and the general continuity of the film was occasionally flawed and overall merely OK. Again these days, in the modern era of filmmaking, there are some nuances to editing that have become a minimum standard, and while using a single camera to shoot the whole film might be considered an artistic throwback, or even a difficult or quaint feat these days, I'm sorry but I'm not really buying that this was the real intention.

Necessity, laziness, or budget is more likely the real and understandable reason. But I'll continue my blaspheme, and actually suggest that Iranian filmmakers in general, but Panahi in particular should at least consider using 2 cameras for once, along with the aforementioned software tools.
So technically I'll give the film a tepid “Ehhh?”

We have been led to believe (mostly by the French) that almost all critically acclaimed films that come out of Iran have these hidden meanings and messages, and that they are for the most part deep angst-ridden expressions of protest against “the system”.

Apparently not for this Panahi film. From all of the PR (primarily the posters) surrounding this film, and the very first scene, we understand fully that in Iran, today, at this very moment, among the many, many, many, many things that women are not permitted to do, that men can do merely by birthright, attending a simple soccer match is definitely one of them.

The same God that deemed fit to “bless” Iranian women with their gender, apparently cannot control the urges, actions, and foul mouths of Iranian men. So great is this almighty shortcoming, that to the aid of God must come the law of more Iranian men, to shield women from the very nastiness of God's work, namely Man, depicted by Iranian men. Which is pretty much the message I got from the film. All within the first 5 minutes of it. Being a fellow Iranian man, I have to say, I was pretty much disgusted with myself!

The rest of the film as far as I could tell, was the same old tried and now merely annoying comedic exploration into our many-faced national complexed fallback strategy of ridiculing every non-Tehrooni ethnic minority, their stuffy nosed accents, their klutzy mannerisms, and of course the good old standby, the stereotypical, simple, and lovable Dahati.

Dear Mr. Sayyad, as much as I am sure you would like to bury him, sadly your Samad is alive and well, placed strategically in almost every feigned avant garde Iranian film of today.

Nervous laughter skittered here and there throughout the theater, at the foils and foibles of the goobers in the film, the country bumpkin soldiers assigned to our fearless five trouble makers. What scamps! Har! Har! Har!

I can understand how laughter can be argued to have possibly positive net-change benefits, and especially laughing at one's own circumstances could be a source of occasional healing, or even that injecting humor into a situation can open one's eyes. But this is a completely unfunny exploration of our national syndrome! This is far beyond funny, this is entirely, completely, utterly and insultingly absurd. So ridiculous that it is impossible to laugh.

This is what shocked me most about this film, that the comedic interjections were even a consideration to get the message across. I'll back off now and say, I totally support the choice of Panahi in this choice of expression of his art. But I'll follow with a, but it didn’t work for me at all.

If Panahi wanted to point an accusing finger at the systemic sexism in Iran today, he should have gone full “Documentary Style”, and using (more than one) hidden cameras shown the complete range of abuses perpetrated by God's other children. In effect, instead of the cheap laugh, he should have gone for full-blown outrage. Because I think he could have gotten it. Rather easily too.

All I know is having been born of a woman, I was disgusted at how cheap jokes were used to soften the oppression being witnessed on the screen. Maybe it's me and maybe I am too sensitive to the insulting portrayal I saw played out as merely funny. Even guffaw-worthy in some parts. So I'll admit that I could be wrong in my reaction to this film.

The reason I say this, is that many have given this film such wide acclaim. Hamid Dabashi a Professor of Iranian Studies and Comparative Literature at Columbia University in New York, seems to think Offside is “…the crowning achievement of Iranian cinema over the last two decades…”. At a film festival in New York last year, Dabashi said that the film is “…a singularly important means of exposing Americans to a different vision of Iran…”

Really? I don't know about that because it sounds like it actually confirms the existing American notions on the pervasive lack of rights that Iranian women have, and even adds a few new ones. Namely, that we Iranians like to ridicule non-Tehroonis. A lot.

They say a film can be thought provoking, and I am sure many have given this same attribute to this film. I just wish that for once, a film could provoke something other than just more useless thought.
I definitely recommend that everyone should see this film if it comes to your area, and I won't let out the ending. Not because it is an uplifting film of hope, just curious to see if I am the only one outraged.