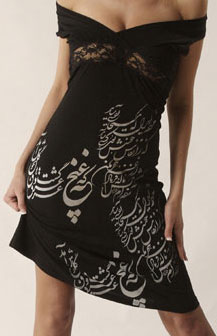 manirooniam.com: Over the vast expanse of the universe, a vagrant seed of a concept drifts about and lands on fertile land and is nurtured into a tree by intense passion yet tender love. The ardent labor bears fruit that is satisfying not only to Masih, the creator, but also to those who share the great pleasure of savoring the delectable fruit of his exhilarating art.

Masih comes from a family of highly-prized and respected tile artisans of Esfahan (Isfahan), whose magic creations of indigo, turquoise, and cobalt blues have adorned the mosques and historical monuments of the city of Esfahan for centuries. Holding a torch in hand and a palpitating hope in heart, he illuminates the path to mystical Persian calligraphy >>> Photos

Developed centuries ago in Heart , once one of the most important cultural centers in the world, Persian calligraphy and miniature painting have remained a staple form of art to Persians. Persian calligraphy is a living entity with infinite number of personal touches that give a peculiar mystique to this art. Masih Zad is the artist whose exquisite art of breathing life into the patterns whose mystical meanderings leave a soothing effect on those who
appreciate rhythms and cadences in Zen-like calligraphy.

Born in 1984 in Esfahan, also known as “nesfe Jahan” (half of the world), Masih has always possessed the passion and exuberance for Persian art. Living in Esfahan, a city of a tremendous variety of arts, Masih started out with restoring subtle old Persian rugs to their old glory at the age of 13. This art focuses on preserving the fragile weave of valuable antique rugs as well as other aspects such as the characteristics of dyes and provenance of
each unique Persian rug.

He designed his first T-shirt June 2001 in Iran, which he keeps in his archive.

Upon arrival in the Unites States, he started to design and produce a variety of Persian-style T-shirts , jeans and suits . “Mr. Erfan Izadi , a close friend, purchased my first T-shirt. I considers him one of my best friends, a mentor, and a great source of inspiration and encouragement,”
says Masih.

Masih is inspired by designs utilized in Persian rugs, miniature paintings, and the art of Persian calligraphy. He has closely examined and analyzed the works of past and present masters such as, Kamalolmolk , Ali Reza Abbassi, Behzad, Arjangi and Seirafian. Yet he has developed his own authentic stlyle.

Masih’s sole purpose and dream is to disseminate Persian art throughout the world by presenting one of the facets of Persian culture. He has surrendered his soul to this lofty cause, and consequently the uniqueness of his work, along with the singular aspects of it, sets him apart as a pioneer in this art >>> Photos