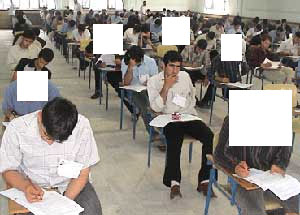 Since 1979, the government of Iran has systematically sought to deprive its largest religious minority of the right to a full education. Specifically, the Islamic Republic of Iran has for more than 25 years blocked the 300,000-member Bahai community from higher education, refusing young Bahais entry into university and college.

Eventually, in response to an international outcry over this oppressive behavior, the government officially announced in late 2005 that it would drop the declaration of religious affiliation on the application for the national university entrance examination. Consequently, the Bahai students could take the examination in 2004 and 2005.Yet, later in the admission procedure, Bahai youth were passed over and not accepted.

In 2006, for the first time in 29 years, more than 200 Bahai students could enter national universities. However, from the very beginning of the school year, gradually most of these students were expelled according to a previously planned strategy.

This year (2007), however the government has employed a new tactic. Most Bahai students have not yet received their test report cards. Not receiving their results, they are now even unaware of their scores and the fact that whether they have passed the test or not.

According to the web site of the national Educational Measurement and Evaluation Organization (EMEO), 800 Bahai students whose report cards are not issued lack enough documentation. Contact have been made with those officials in charge; nevertheless, no reasonable answer was given. Right now, the Bahai students who have not been informed of their exam results face an unclear situation

When I was a child, I talked about my dreams with my mother. One day I wanted to be a teacher; the other day; a scientist or a physician. My mother would look at me and tell me “try to love everybody. Whatever you become, try to help others.”

So, seven years ago when I decided to become a physician, I was sure that I would treat my patients with love. Days have passed and I have learnt a lot. At first, the dream of becoming a physician was the most real and beautiful dream of my life. However, later I got to know my mother who was denied to finish the final semester of her studies at university. I saw my brothers who could not even take the entrance exam of national university.

Then, one day I heard the hopeful voice of one my friends who had a new story for me. He told me of his courses, of the entrance exam that he was going to take, and of the test preparation classes. He shared his dreams, hopes, worries and fears with me. I felt his excitement. I felt his preoccupation and anxiety. However, I was happy that being a Bahai is not any more an obstacle for continuing our education.

Today, my friend called and talked in a voice that showed no trace of that anxiety. He told me of his report card which has not been issued, and of his result which is not clear. He told me of the answers which were not given to him. He told me of his more-than-ever-strong determination to revitalize his country, Iran.

I cried. I cried to the extent that no tears remained for me to shed. I cried but not because of my mother who could not fulfill her dream; not because of my brothers who did not envy their non- Bahai friends even for a second; not because of my friend who was deprived of continuing his education, not even because of myself and my lost dream of becoming a physician. I cried only because I still remembered that day in my childhood when I had promised my mother to love everybody. It was only then that I understodd why I made such a promise in the prime of my dreams. I cried, and I feared that I might not keep my promise.

But weren’t these people — who I try to love — once children? Haven’t they promised their mothers to love me?