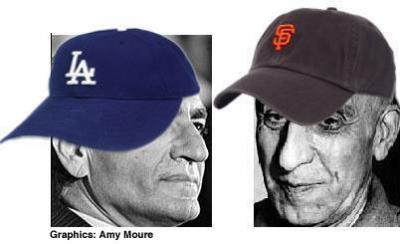 In moments of statistical introspection, I wonder if LA Dodgers fans
are generally Pahlavi supporters. The occasional Shah picture posted on
huge Westwood billboards, and the handful of TV stations time capsuling
pre-revolution Tehran are tempting bits of data. San Francisco Giants
fans, on the other hand, are likely pro-Mossadegh, though I lack the
evidence of billboards. Needless to say, Giants rule and Dodgers suck,
but it is nice occasionally to brawl with facts and reason. Two
meticulously researched books by Oxford scholar Homa Katouzian hit the
ball right out of the ballpark for the Giants.

The first book, Iranian History and Politics: The Dialectics of State and Society, develops the author’s theory of “arbitrary rule,” and establishes a foundation for understanding Mossadegh’s uniqueness in Iranian history. The second book, Mussadiq and the Struggle for Power in Iran, specifically analyzes the events of the Mossadegh period, demonstrating how he personified a new paradigm in Iran’s civilization.

Arbitrary rule should not be confused with dictatorship, Katouzian
says. “The distinctive characteristic of the Iranian state is that it
monopolized not just power, but arbitrary power–not the absolute power in laying down the law, but the absolute power of exercising lawlessness.” I believe the umpire is a good example of a dictator. You can’t argue with his decision, but neither can he change the rules of baseball. Katouzian cites the example, of England as a dictator whose society did not allow arbitrary rule. This dictator had the most unfettered power of any English king, yet he had to use threats, coercion, bribery, and at least one execution to become head of the Church of England, so that he could lawfully stand up to the Pope (Katouzian does not discuss motivation or methods, just that Henry VIII got the approval of Parliament).

Looking for examples of arbitrary lawlessness, on the other hand, I found this recollection by Farhad Diba of an encounter with Mohammad Reza Pahlavi:

“The Shah asked me what I was doing and I, very proudly, told him
about how well NCR [National Cash Register Company] was progressing in
Iran. When I reported that to my father the next day, he said “You are
a fool. Sure enough, within the year, NCR (which my father had
introduced into Iran and, over 25 years, it had grown into a large
business) was taken from us and given over to the Pahlavi Foundation.”

In Iranian History and Politics..Katouzian mentions a few of the
countless examples of arbitrary usurpation of property by various
Shahs. The suspicion that the wealth may have been acquired by unjust
means in the first place gives Shahs a certain Robin Hood appeal. But
Katouzian’s scholarship exposes the practice as a tragic reason for
Iran’s economic backwardness: capital does not accumulate over the
generations, making it impossible for any large industrial or financial
enterprise to take root.

Under the arbitrary rule of its monarchs, Iran was a “short term
society,” as Katouzian terms it, where few social structures were
allowed to stand long enough to evolve the sophisticated architecture
of modern institutions. In Europe, lords, barons, counts and dukes had
the brutal right of ownership to their land, making a feudal system
possible. Iran’s khans had no ownership rights, only privileges that
could be taken away at the whim of the arbitrary ruler. In such a
system even feudalism has no incentive to grow, much less its Western
progressions: a powerful merchant class, large scale capitalism, and
socialism.

Applying Katouzian’s arbitrary rule theory, I figured out that the
spike in the price of oil in the seventies only created the illusion of
a modern economy in Iran. This period was in reality little more than a
shopping spree by the country’s sole owner, the Shah. In the historic
pattern of economic insecurity of the wealthy, nothing had changed.

Applying the simple yet powerful theory again, I realized that
freedoms enjoyed by Iranian women and religious minorities during the
Shah should not be misunderstood as a modern appreciation of human
rights and dignity. True to Iran’s historic pattern, all such freedoms
were privileges granted by the monarch, to be taken away at his
convenience. The Shah may have been a benevolent soul, but benevolence
is no substitute for guaranteed rights under a long term tradition of
law. Niceness is a character trait, not a social institution.

The arbitrary rule concept is developed into a solid theory in the
book Iranian History and Politics the Dialectic of State and Society.
Now the reader is ready for Mussadiq and the struggle for Power in
Iran, fully prepared to appreciate this leader’s uniqueness in Iranian
history.

The 1906 constitutional revolution was an attempt to put an end to arbitrary rule. At the time Mossadegh was in his early twenties, and for forty-five years he watched the revolution get torn apart by foreign interference in domestic politics. By the time he became prime minister, Mossadegh knew what to do to piece Iran’s constitution back together. His nationalization of Iranian oil had far less to do with revenue than with eliminating foreign intrusion into Iranian affairs. His recalcitrance in coming to terms with the British should be assessed as serving his grand project˜protecting Iran’s newly discovered paradigm of lawful leadership.

Mossadegh himself has been criticized for breaking the law when he
temporarily dissolved the majles. “How is that different from the
dictatorship of the Shah?” his detractors ask. Katouzian admits the
mistake, while explaining the complex mitigating circumstances. Yet his
arbitrary rule theory makes it unnecessary to decide whether Mossadegh
was a dictator. The reader has already learned that the term “dictator”
in the Western sense does not describe our Shahs at all. The Pahlavis
were not dictators, but arbitrary rulers. Mossadegh, dictator or not,
acted in the modern paradigm of the struggle between various interests
of society. For him, the primitive mellat [people ]vs. dowlat [state]
dialectic was an extinct theme.

As Katouzian explains in Iranian History and Politics, our numerous
rebellions had always been about the mellat overthrowing the dowlat.
Everybody vs. the “institution” of the arbitrary ruler. The upheavals
led to a period of chaos [fetneh/ahsoub] until a new arbitrary ruler
enforced order and began the cycle all over again. In Mussadiq and the
Struggle for Power in Iran it can be seen that the battles of the
Mossdegh era were of a fresh variety. We were fighting over which
interests in our society were going to dictate the rules. This gave a
totally new texture to the power game, which for the first time could
be termed “politics.” Katouzian emphasizes that there was no Persian
word for “politics”; the modern meaning of the old word “siaasat” was
first adopted during the constitutional revolution.

Though the Shah appeared to win the day after the 1953 coup, he
could not hold back Iran’s new paradigm, best archetyped in the
Mossadegh drama. In an unmistakable occurrence of Katouzian’s mellat
vs. dowlat phenomenon, everyone rose against the Shah in 1979. Not a
single major element of Iran’s society defended him. Not the merchants
he had made wealthy, not the workers he had created jobs for, not even
the women and the minorities he had treated so kindly. This puzzling
ingratitude is completely explained by Iranian society’s resolve to put
an end to arbitrary rule. An evolutionary force overwhelmed sectarian
interests.

Some argue that we should stop dwelling on Shah and Mossadegh. After
reading Katouzian, I believe we can safely drop the Shah from
conversations, as his species is unlikely to be part of Iran’s
political ecology again. The Pahlavis were the last dinosaurs. But
Mossadegh was the first mammal. His political genes are alive, evolving
and relevant. Iran’s stubborn struggle against foreign dependence, even
in the face of sanctions, is straight out of Mossadegh’s book. Western
analysts flummoxed by The Islamic Republic’s resilience to regime
change should acknowledge the unprecedented symbiosis that now exists
between the dowlat and parts of the mellat. The Islamic establishment
in turn should consider to what extent the concept of a Supreme Leader
contradicts the program that the Iranian nation has set for its long
term development. The regime’s leaders should also beware: their power
is imperiled whenever they arbitrarily suspend constitutional rights.

The Shahs are dead, but Mossadegh’s legacy remains a giant factor in
Iran’s future. This is why Giants still rule. And the Dodgers? Well,
who cares anymore?