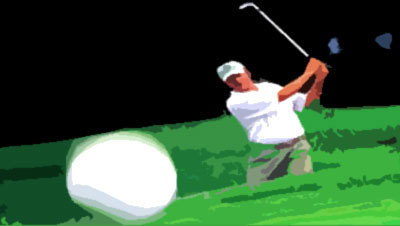 A swift change from dominance to bullyism I am not a golfer, but my
good friend Bill is… has been for years to what many probably
consider an addictive level. I do watch on television, however,
occasional PGA and LPGA events since it’s the only spectator sport that
allows me to feel mentally relaxed and not obliged to maintain some
artificial team loyalty. And, as a bonus, such viewing permits me to
multitask; even becomes point of origin for some of my writing.

Last Sunday, Bill invited me to be his guest at the final round of the
LPGA Safeway Classic tournament. The ladies were in town, playing at
what I’ve come to call Bill’s ‘alternate residence” or, if you prefer,
hangout: Columbia-Edgewater CC. This annual event provides the Portland
married male population a live opportunity to find out what our 39th
president, Jimmy Carter, meant by ‘committing adultery in the heart,”
for this bevy of talented golfers do an extraordinary job to help
choreograph the stage for lust.

But fear not, I won’t get into the subject of lust, or a dissertation
on why these LPGA girls really rock beyond the promotional PR. Nor is
my subject the current top player in women’s golf, Lorena Ochoa, the
winner this time ˆ her third consecutive victory after the recent
crowning as Lady Top Gun. No, it isn’t about this complete individual,
athlete as well as person, but rather the level of expectation thrust
upon her by those in the media who make a living commenting on the
sport: broadcasters and writers of golf.

It seems that for at least an entire generation these media dedicated
hitters, not just in golf but in all broadcasted sports, resort to
color commentary all too often made with derogatory brushstrokes on
these superstars’ ascent to or descent from the very top. Only when
you’ve been crowned, without possible nearby pretenders, that you are
afforded the adulation and regal treatment… but only if you remain
distanced from the sport’s hoi polloi professionals and stay dominant
in the sport.

A local sportswriter told me a few years back, when I asked him about
what I interpreted as a changed and jingoistic attitude on the part of
sports’ commentators during the Summer Olympics, that the American
psyche had changed drastically during the 80’s, and that sports were
simply following the societal model in international politics of
winner-take-all, no longer a podium to share with silver and bronze.
According to him, the old American ideal of ‘pulling for the underdog”
had been buried with the advent of the ‘awakening of America”
promulgated during the Reagan years.

A dominant role in a sport like golf could prove to be immensely
beneficial for its growth and popularity; that is, when that role is
held by someone who not only possesses great skills to master the
greens, but also the personal stature to do it with grace and humility.
I have no doubt that Ms. Ochoa will fit the bill in women’s golf.

A dominant role in international politics could also prove to be
greatly beneficial to the social and economic well-being of the world
at large, and provide an opportunity to work towards peace and harmony
among nations. That dominant role was inherited by the United States as
the 80’s were coming to a close; but, unfortunately, this nation was
ill-prepared to assume such responsibility with appropriate grace and
humility. Instead, aided by political bipartisanship, it transformed
its acquired dominance into bullyism… elevated to a true moral art
form by the Bush administration and the centurions of neoconservatism.

No place has been more obvious in America’s attempt for global hegemony
than in its dealings with the peoples and nations of the Middle-East:
from its clear interference in Lebanon’s internal politics, to the
genocidal adventures in Afghanistan and Iraq, to the menacing treatment
of Syria and Iran, to the bully in-your-face economic punishment of a
government democratically elected in Palestine. Of course, America’s
meddling in the political affairs of former soviet republics, or the
coup against Hugo Chavez in Venezuela (2002), was also par for the
course. The metamorphosis from dominant to bully was swift, requiring a
single stage.

However, America’s hegemony can no longer be built on the perceived
economic or military weaknesses of other nations, not when those
perceptions are beginning to be proven wrong. Both Russia and China are
on an international ascending course; China now beginning to flex its
economic muscles; and Russia finally ridding itself of the complex it
acquired from the breakup of the Soviet empire and its struggle in
adopting a new system; an unnecessary struggle for which the US is much
to be blamed. And there are other major nations and regions on that
same ascending course. All of this is concurrently happening as the US
appears to the world, economically and militarily, as an overblown
bubble ready to burst.

And to think… the United States once had an opportunity to be on top with grace, just like Lorena!