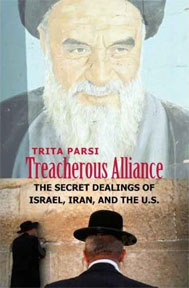 Excerpt
There are few Western cities where Persian pop music blasts at full volume in shopping malls. Yet this is a daily, natural occurrence at Jerusalem’s high-security downtown bus terminal. Here, in the equivalent of New York’s Penn Station, eighteen-year-old Israeli soldiers wait for their rides home, assault rifles slung over their shoulders, Persian pop legends Moin and Ebi pounding in their ears. Most of the CD stores here are owned by Iranian Jews, and over the past twenty years they have created a market for Persian pop in the very heart of the Jewish State.

When one scratches the surface of the ferocious Israeli-Iranian enmity, an affinity between the two cultures emerges. In many ways they are more alike than different. Both tend to view themselves as somewhat superior to their Arab neighbors. Many Iranians think of the Arabs to their west and south as culturally inferior; as brutes who had the good fortune to have Persians as neighbors who could civilize and refine them.

Similarly, having defeated the Arabs in numerous wars, most Israelis have little respect for their capabilities. “We know what the Arabs can do, and it isn’t much,” an Israeli analyst told me arrogantly, months before the war with Hezbollah in 2006 might have sobered him a bit. Incapable of suppressing their sense of superiority or of convincing the Arabs to let go of their own stereotypes of Persians and Jews, Israelis feel they are left with no option but to view true peace as unattainable.

Some Israelis have all but given up the dream of living at peace with their neighbors, whether through true friendship or minimal but mutual recognition and acceptance, and have settled for a vision of “no war, no peace” built on a bedrock of Israeli military preponderance. The Iranians drew a similar conclusion centuries ago. “The Arabs are out to get us,” Israelis and Iranians often think as they go about their daily lives.

Perhaps most importantly, both view themselves as culturally and politically disconnected from the region where they are forced to face their regional foes through the lens of a Manichean mindset. Ethnically, the Jews of Israel are surrounded by a sea of Arabs who may not always have been at war with Israel, but who have never been at peace with Israel. Culturally, Ashkenazi Jews from Eastern Europe dominate Israeli society, even though the profile of Mizrahi, or Oriental, Jews has risen in recent years. And religiously, of course, Israel is unique regionally and globally as the only state based on the Jewish faith.

In perhaps a natural response to the long Jewish history of persecution, Israel has a penchant for mistrusting the outside world. According to this mindset, international institutions and global alliances can never substitute for Israel’s own ability to protect itself. At the end of the day, a UN Security Council resolution can never protect Israel as well as two hundred nuclear warheads, Israelis believe. “These are weapons of peace,” an Israeli general told me proudly, failing to see the contradiction in terms.

The Iranians aren’t terribly different. Proud heirs to a civilization that precedes Islam by at least two millennia, they are the first to point out to Westerners that they are not Arabs. Iran, or the Land of the Aryans, as it is believed to mean, is largely populated by peoples speaking Indo-European tongues. Persian (or Farsi) is linguistically closer to French and Swedish than it is to Arabic, although it includes many Arabic words and is written in the Arabic script.

And though Iran was Islamized in the seventh century A.D., the Persians kept their language, cultural traditions, and the special quality that to this day connects them to their Zoroastrian past. The Iranian New Year, Nowruz (New Day), has been celebrated in Iran for more than three thousand years and remains the largest Iranian holiday today, far outshining any Islamic festival. When Ashura, the Shiite Muslim day of mourning commemorating the martyrdom of Hussain ibn Ali, the grandson of Prophet Muhammad, at the Battle of Karbala in the year A.D. 680, coincides with Nowruz, a day of rejoicing, the Zoroastrian soul of Iran wins in spite of the wishes of Iran’s clerical rulers.

Even as Muslims, the Iranians distinguish themselves from their surroundings by following the Shia line of Islam rather than the much larger and dominating Sunni camp. And like Israelis, Iranians are deeply suspicious of the outside world. While Jews have been persecuted and have survived a Holocaust, Iranians have fought colonization, annexation, decades of foreign intervention, and, last but not least, an eight-year war with Saddam Hussein’s Iraq, in which virtually the entire world–including the United States–sided with Iraq.

When Saddam invaded Iran in 1980, the UN didn’t consider it a threat to international peace and security; it took the Security Council more than two years to call for withdrawal of the invading forces. (Compare that to Saddam’s 1990 assault on Kuwait, when a Security Council Resolution [UNSR 660] passed within twelve hours of the invasion, demanding an immediate and unconditional withdrawal of Iraqi forces.) Another five years passed, mainly because of American procrastination, before the UN addressed Saddam’s use of chemical weapons against Iranian soldiers and civilians. (The United States and Western European countries either directly sold components for chemical weapons to Saddam or knew and quietly approved of such sales.)

Even then, Washington ensured that the UN resolutions would be watered down to protect Saddam. The United States later cited these same crimes to justify its invasion of Iraq in 2003. For the Iranians, the lesson was clear: When in danger, Iran can rely on neither the Geneva Conventions nor the UN Charter for protection. Just like Israel, Iran has concluded that it can rely only on itself.

“Treacherous Alliance” is available on amazon.com