A path to nowhere 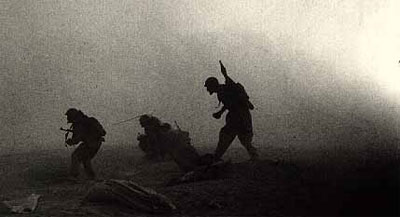 A Path To Nowhere is a book of first Persian Gulf War (Iran-Iraq War 1980-1988) memoirs that begins in winter 1986 with author’s anxious gazing at the snow-spotted Alborz in north of Tehran, Iran where he starts his journey and extends to the hazy picture of southwestern portions of Zagross where he steps out of Iran to his exile in summer 1988. Through experiencing heat of many battles, he comes to deep understanding of the reality of the war and the motives behind it. In the process, he learns many lessons of adapting and surviving the interaction of different hostile forces that shape the whole story.

Manoucher Avaznia is a veteran of the First Persian Gulf War (Iran-Iraq War 1980-1988) who has spent nineteen months in the Iranian battlefields with the rank of second lieutenant. He is an eyewitness of many unfolding events in the last stages of the war both in battlefronts and in cities; and so he is an authority in the field. Manoucher lives in Ottawa, Ontario, Canada with his family. Thus far he has published two books of poetry: Sky In River; A Taste of Last Cherry, with Infinity Publishing company.

EXCERPT
A New Skin
It was the second day of winter 1986. The sun had already set and the snow-spotted Alborz Mountains to the north of Tehran were still visible behind a haze of smoke hovering the city. Two nights earlier I had toasted the birth of the Iranian god of Mehr (Mithra: god of the Sun) in a cave in the Alborz with some fruits and nuts along the longest night of the year in an inn in the City of Mashhad; and now I was at Khazaneh Bus Terminal in south of Tehran taken a seat by the window of a bus full of uniformed men like myself bound for Khuzestan in southwest of Iran wondering whether that would be my last trip from that terminal or it was just the beginning of a series of such trips that I had to take to the war fields in the south and west to fight an endless war regarded holy by many, unholy by many.

In the Alborz I always sought the strength, the hope, and the vision that we needed to face a dreadful history filled with grave events: wars, invasions, resistance, uprisings, and revolutions. Perhaps, no country on the face of the Earth has faced as many invasions as Iran has. Perhaps, no other nation has been so frequently and pervasively destroyed and reconstructed like Iran. Perhaps, no nation has witnessed so many uprisings and revolutions against its rulers and invaders as Iranian nation has. As long as history remembers we have been frequently mown and re-grown from the same roots. Perhaps, the secret of our dogged defiance of odds and subsequent survival was hidden in the very Alborz that I was leaving behind. Have Iranians learned from the Alborz the great lesson of resisting and surviving all destructive elements of history? Is that the reason that Alborz always loom in our consciousness and unconsciousness?

Every time I had traveled along the Alborz I was amazed at their awe-inspiring majesty. I could never take my eyes off them until I had traveled miles and miles away. Nothing else could draw my attention like the Damavand Peak in which I would entirely lose myself before I lost its full view in many turns and twists of the Haraz Valley. In the meantime I almost did not think about anything else beside Damavand’s silver and white cap as I was murmuring the poems our poets had written in adoration of this “White-headed Mother” of ours. You thought I was petrified in the revered temple of Damavand while my lips whispered the holiest prayers dedicated to it. The peak, though white and aged, always gave me the strength that I needed to continue my way among the events that were raining upon us from every side. Especially in those days that I was roaming the no-man’s-land of skepticism I desperately needed the same strength and hope to continue the road that I had traveled thus far. I was leaving for the war fronts and my mind in its entirety was filled with fear and anxiety. What could be a better console to me than the Damavand that always put my within at ease with its mighty tranquility? So many times that day I had tried to take a glimpse of the peak and every time I had failed. Was there no hope left for me? I tended to think all hopes had eclipsed for me as the Damavand was hidden from my view.

I was not prepared for this trip. As our military training concluded in Shiraz we had been handed some cash and one-week-leave for a trip to Mashhad in northeast of Khorassan to join the army we had been assigned to; expecting I would be kept in the army garrison for a few months before being dispatched to the war fronts. With my surprise, upon arriving the garrison we were told the army was in the southern fronts and we were to immediately introduce ourselves to its headquarters there. Where in the south the army was stationed was not exposed to us. Then, a letter of introduction had been handed to us that we took to the train station and received free tickets for our trip. Before sunset we had started a twelve-hour-trip along the southern flanks of Alborz to Tehran while I carried a small military bag that contained a few pieces of laundry, a towel, a toothbrush, a tub of toothpaste, and a pair of pants and a blouse, barely enough to keep me warm and clean. We were told Khuzestan was warm and we did not need warm cloths. Accordingly, a military overcoat was enough to keep us warm until we reached there.

Once in Tehran, we tried to use our letters for free train tickets for Khuzestan; but we were told Iraqi planes had bombed an important railway bridge somewhere in the Zagross Mountains in Lorestan and so we had to take the bus. That was the reason we had gone to Khazaneh Bus Terminal early in the morning and now it was late in the afternoon. We had spent all that time in the circular building walking, talking, and munching on sandwiches.
At two o’clock in the afternoon I had carefully listened to Khomeini’s speech that was being broadcasted on the terminal speakers. He had a meeting with his statesmen; I dearly wished he had decided to bring the war to an end. After all, he was the only person in the country who could use the power of a religious decree and his vast popularity to bring peace; and until that day he had used those powers for the continuation of the war only.

“May he agree with peace; the people turn to jubilations; and we return home for festivities,” I had wished in my heart with skepticism.

To my dismay, and unlike previous meetings, Khomeini said nothing about the war. Three hours later all thirteen of us jostled our way to the bus among the crowds of Bassijis (5) who were also going to the south to make the Army of Mohammad. Titled after Mohammad: Prophet of Islam, the army gave a connotation of holiness to the war and the Bassijis mission.

With green bands on which one could read “Ya Sar Allah: Help Oh Blood of God”, around their heads, the Bassijis sincerely believed in the holiness of their fight and they were already renowned for their dauntless fighting and dying. Whatever their convictions, they were among the poorest and the most brave people who were willing to sacrifice their own lives for reaching their religious goals. Those days, multitudes of poor young men were ready to take part in the war and to become Bassijis. In reality, Bassijis were the main forces that had kept the war machine running in the previous few years. This time, also, it had been well publicized they were going to lead the longest war to a victorious end.

For a long time the propaganda machine was working days and nights to convince Iranians that five hundred armies of Bassiji forces were going to attack Iraq soon. With military standards that many units equaled a force of ten million warriors. Soon they found out such a number was so unrealistic that no one would believe it. Therefore, they replaced the word “armies” with the word “battalions” while kept the number “five hundred” intact. This claim was more reasonable; nevertheless it was too great a force to mobilize. Regardless of propaganda, a huge number of forces were mobilized for the promised attack.

I was neither a volunteered Bassiji to believe in the holiness of the war; nor was I an enthusiastic teenager seeking excitement of adventures. In the second half of my twenties, I was a conscript lieutenant spending my compulsory military service in the Iranian military. By law every healthy male who reached his nineteenth birthday had to serve in uniform for two years. Without a military service conclusion card he was deprived of many social privileges and benefits ranging from having a job and travel documents to driver’s license and living free from police harassment. Because of my university education and two periods of interruption in its process, I was late for military service for seven years.

The first interruption occurred in autumn 1978 when I was a freshman. It was the beginning of the revolution and interruption lasted five months only. Students closed universities all across the country to protest the Shah’s governments. They participated in mass demonstrations in huge numbers; and as a result the Shah left the country and monarchy collapsed and political freedoms were gained. Like almost all students, I enthusiastically participated in anti-Shah demonstrations and went back after the victory filled with energy, enthusiasm, and optimism that the revolution would solve many of the problems our nation had inherited from incompetent, corrupt, and puppet governments of the previous decades and centuries.

In the spring of 1980 the Cultural Revolution brought about the second interruption. Universities were shut down and remained closed for three full years. To my astonishment, another dictatorship was consolidated; freedoms were robbed; and theocracy was perpetuated in the country. This interruption had devastating impacts on me: I was disillusioned with Khomeini’s government, its real intentions, and policies; and therefore, I grew pessimistic, crest-fallen, and isolated.

In the fall that followed the Cultural Revolution I taught in a high school in City of Bojnord for a few months. A large number of students in my situations were doing the same. Soon I discovered that our energy as hourly-paid teachers was being used against freedom-seeking teachers: they were being purged and their teaching jobs were being assigned to us. I felt guilty. The teaching job that I highly esteemed turned loathsome. I never wanted to become a tool in the hands of those who were seeking re-establishment of dictatorship in my homeland. We had paid the dear price of life for freedom and we should not have lost it easily. Especially when I found out some of the purged teachers were imprisoned and even executed, I decided never return to that teaching job. Few times I was asked to go back to class. Even my family argued if I did not take the job it would be assigned to another person. They thought teaching was an opportunity to keep me busy and pay me well while it was adding to my work experience. I always reasoned that I was too mentally exhausted to be able to teach.