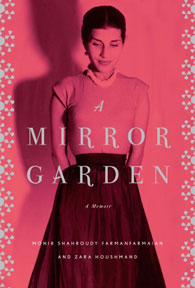 Zara Houshmand, co-author of A Mirror Garden, the memoirs of Monir Shahroudy Farmanfarmaian, will be reading and signing her new book in the San Francisco Bay Area and Beverly Hills at these locations:

At a time when most Iranian women were living through the contradictions of a post-occupied Iran in the late 1940s, Monir Shahroudy, an aspiring artist from Qazvin, was making her way to America in what seems an almost accidental, if not charmed, set of circumstances. She was through her grit, intelligence, and obvious privilege, able to open doors for herself that led to what would later appear to be a rather atypical Iranian immigrant experience.

Monir’s luck, perseverance, and her ability to grow up and remake her life in an American context is well-documented and powerfully articulated in her memoir, A Mirror Garden, but without the gift of a story, and a superb storyteller in her co-author, Zara Houshmand, we might not be so charmed by this woman’s life.

Houshmand, has successfully rendered the story of this particular woman into a story that speaks both to the struggles and promises of immigrants, but also to the ways that an Iranian woman works through the seeming complexities of her culture, her identity, and her own aspirations to navigate a place for herself in two worlds—in both Iran and the U.S.

While I found myself concerned about this being another nostalgic look back at Iran through the eyes of an Iranian woman’s memoir, instead I encountered A Mirror Garden as a bildungsroman—a tale of growing up and self-realization—and of the ways that a woman’s perseverance, vision, and good fortune, lead not necessarily to a fairy tale ending, but a rather, a clear sense of being and acting in the world.

This is a narrative that indeed runs against the notion what has been so regularly drummed into Americans—that women of Middle Eastern cultures—whether Iranian or Arab—are merely being acted upon and have no agency. It is also a story about a woman who moves through the powerful and elite circles of two societies—American and Iranian—to make and remake herself in several images.

Here the notion of the mirror garden, or what she in part becomes known for in her work with “mirror mosaics” is indeed an apt metaphor for her story. For indeed this is the story of “swirling shards of reflections” on a life made in a particular moment of Iranian and American history when the two countries were more closely connected.

Monir Shahroudy Farmanfarmaian’s story, while laced with the privilege of having married into one of the most important and wealthiest families in 20th century Iran, moves beyond that privilege to describe her own trajectory through the world of art and artists both in the U.S. and Iran. Her contact with American artists and the world of the post 1950s New York art scene, gave Monir tremendous confidence to pursue her chosen path.

While her own striking beauty and perhaps the exotic position of being an Iranian woman at a time when so few Iranian women might have been visible in the New York art world, gave her a certain access, her narrative is much more aligned with the American ideals of individual fulfillment. When she first arrives in America, she is surrounded by three males–her brother, Ahmad, Manouchehr, her fiancé (and later her first husband) and another Iranian male friend. While these men both offer some semblance of “protection” and chaperone, she eventually, sees beyond them and expresses her autonomy and desires to the point of divorcing and becoming a single parent in 1950s America.

The story, in a sense, clarifies what many immigrants to the United States, come to understand, that immigration is a complex process of leaving behind and taking up, of hopeful growth and evolution; it is the story of becoming something other than what might have been possible if one had stayed in one’s own country. For that reason, Shahroudy Farmanfarmaian’s narrative is much more about what took place in her life in America, and what it gave her the ability to accomplish as both an artist and as a woman, so that she might be able to pick and choose the course of her life after she returned to Iran (and this is both in the pre-and post-revolutionary period).

Perhaps what is most powerfully narrated in A Mirror Garden is, that like many of her Iranian contemporaries who are educated or exposed to the West, Shahroudy Farmanfarmaian had and has a clear desire to engage with her country and to do right by it. While she may have faltered and fallen and, at times compromised, her love for Iran grows through the richness of her experiences in America.

And like the mirror mosaic itself, Sharoudy Farmanfarmaian is constructing that sense of wholeness from the fragments of her lives in two distinctive places. Houshmand does her story justice by giving voice to both the sense of reflection and distortion that makes any single life worthy reading as a memoir.

Read an excerpt from A Mirror Garden.