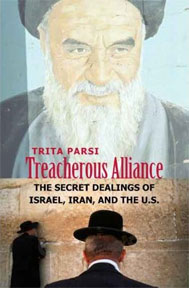 Excerpt
As similar as Israelis and Iranians are, recent Iranian immigrants to Israel experience difficulty in overcoming the cultural shock. The contrast between the traditional values of Iranian society and the liberal currents of Israeli society — defined by the norms and culture of its European immigrants rather than by its Middle Eastern geography–could not be greater. I once had a conversation with an elderly Iranian Jew whom I sat next to during the bus ride from Jerusalem to Tel Aviv. Ehsaq (Isaac), as he was called, spared no love for the clerics in Tehran, but he liked to reminisce about the country in which he had spent most of his life. After all, Israel was only the most recent chapter in his long life, and he had never really managed to make the Jewish State his home. He didn’t quite fit in. In typical Iranian fashion, Ehsaq felt compelled to share the bread he had brought with him for the hour-long bus ride with his fellow Ashkenazi passengers, scaring the daylights out of the more reserved European Jews, who could not quite determine if Ehsaq’s dark features made him an Oriental Jew (Mizrahi) or a local Arab. Embarrassed, Ehsaq returned to his seat. After a moment of silence, he burst out in Persian with a thick Isfahani accent, “Farhang nadaran” (They’re uncultured). This criticism against Israel is commonly heard among Iranian Jews.

Like most Russian Jews who immigrated to Israel after the fall of the Berlin Wall, the Iranian Jews still prefer their own language over Hebrew and cling to their Iranian culture with great devotion. They celebrate the Nowruz with such fanfare that festivities in Los Angeles or Tehran would pale in comparison. “I am proud to be Jewish, I am proud to be an Israeli, but I have nothing in common with these people,” Ehsaq complained to me. “I don’t want my children to live like they do,” he said dismissively of the liberal ways of the European Jews. Misunderstandings between the two groups are not uncommon. Iranians tend to speak circumspectly, avoiding spelling out their intentions or objectives at all cost. With great finesse and redundant politeness, they deliver their message behind layers and layers of nuance and deliberately misleading compliments. Israelis are the opposite. It’s the clash between taarof and chutzpah

Taarof is an Iranian social principle, a concept of insincere politeness. For instance, Iranians invite each other to dinner not necessarily because they mean it, but to show politeness. The expectation is that the invited party will respond with equal politeness–by turning the invitation down. The impolite thing to do would be to accept the invitation on its first offering. An invitation should be considered sincere only if it has been offered roughly three times, after which, of course, it would be immensely rude to decline it. Vagueness, symbolism, and endless nuance are inherent in the Iranian culture and language. “Taarof is a sign of respect, even if we don’t mean it,” Nasser Hadian of Tehran University explained, in a statement Americans and Israelis would find blatantly contradictory. For Iranians, however, there is no contradiction. They understand taarof and why insincere politeness is still a sign of utter respect.

The Israelis have a different cultural trait, chutzpah, meaning “audacity” or “gall.” They tell a joke to explain the concept. A spoiled twelve-year-old boy argues with his parents, and in a moment of rage he kills them both. He is immediately caught and taken to jail to await trial. As he is brought into the courtroom he throws himself at the feet of the judge and cries out: “Have mercy with me! After all, I am just a poor orphan!” Unlike many Iranians, Israelis don’t tend to hide what they mean to say. They can’t help themselves but to be absolutely direct without a single redundant word or any effort to reflect the nuances that inevitably characterize all social situations–a trait that Iranians and Iranian Jews simply find crude and offensive. While an Iranian would go to great lengths to avoid using the word “no,” many Israelis thrive on categorical imperatives. Getting a nuanced answer from an Israeli can be as tricky as getting a straight answer from an Iranian. In the clash between taarof and chutzpah, no one wins. Only confusion reigns.

As much as they can find each other rude and impolite, or insincere and disingenuous, Israelis and Iranians also hold an exaggerated and almost mythical view of each other. The respect and awe the two rivals have for each other cannot be mistaken. “Iranians are perceived as masters of deception, and I think their mythical stature arises not solely because Israelis know Iranians and appreciate their abilities, but because they are so unlike Arabs,” an Israeli expert on Iran told me. “When we classify our enemies, Arabs are the hard heads who would operate along exactly the same guidelines forever and ever, because they’re Arabs. They are narrow-minded. Unsophisticated. Iranians are something that is much harder to characterize for Israelis because they are so much like us.”

Some Israelis point to the biblical story of Queen Esther as an indication of Iranian mastery of the art of manipulation. “In the Bible, Esther acts completely Persian,” explained Shmuel Bar of the Interdisciplinary Center in Herzliya and a veteran of the Israeli intelligence community. “She deceives, conceals her intentions, manipulates and convinces stronger parties to fight her battles.” According to the Shalem Center, Israelis today should learn from Esther’s manipulative “Iranian” instincts and employ it in their diplomacy. But the infatuation with Esther may reveal more about the Israelis themselves than about the Iranians. “We like to think of ourselves as master tricksters,” an Israeli expert on Iran commented. “Consider this: When you define someone as your worst enemy, you say a lot about yourself.” Ironically, in Europe, where the currents of anti-Semitism have been strong historically, the title “masters of deception” was given to the Jewish people–and not to the Iranians. Many Israelis are wary of the stereotypes they have of the Iranians, arguing they are exaggerated at best and misleading at worst. “These myths are created by the old Iran hands; let’s call them the ‘Lubranis’ [a reference to Uri Lubrani, the Israeli envoy to Iran in the 1970s who remains active on Iran affairs at the Ministry of Defense],” explained Ehud Yaari, a veteran Israeli television journalist. “I don’t buy the myth that the Iranians have seven thousand years of diplomacy under the turban of Rafsanjani.” But even Yaari could not deny the esteem Israelis have for the Iranian nation. “I miss Iran. A lot,” he told me while reminiscing about the “good old days” before the revolution, when intelligence cooperation between the two countries was extensive and Israeli tourists flocked to visit Iran–the only Middle Eastern country where Israelis were welcome at the time.

Iranians, on the other hand, refuse to express open admiration for the abilities of the Israelis and try to hide their concerns and fears behind inflammable rhetoric and ideological façades. Iranians angrily dismiss any suggestion that Israel is a rival with Iran for a leadership position in the region. How can that be, they ask with unmasked irritation? With all the problems Iran has with the Arabs, Israel’s problems are far worse, they insist. At least Iran has Islam in common with the Arabs, and Iran is a “real country”–not an artificial state built on occupied Arab land, as they usually argue. “Nobody will accept Israeli hegemony, even if there is a two-state solution,” the head of the Iranian foreign ministry’s think tank IPIS, told me in his office in northern Tehran in August 2004. “Israeli actions are illegitimate, and their population is very small. They cannot be the dominating power. Just accepting them to continue to exist is too much, let alone being the hegemon,” he said. But behind his harsh words lies the Iranian fear of facing a rival in the region that may be small, that may be culturally foreign to the region, but that holds an ace up its sleeve that Iran covets–the support of the United States of America.
(see first excerpt)

“Treacherous Alliance” is available on amazon.com