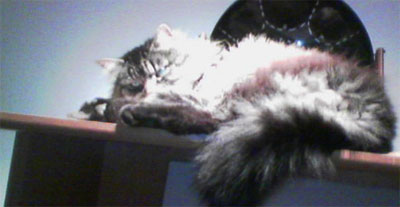 One day three weeks ago our favorite cat disappeared.  She was the most beautiful cat we have ever owned. She was smaller than a full size cat but she had a very leonine profile, grey with black tiger stripes, a bushy tail and yellow eyes. She could do a higher standing jump than any creature I have ever seen. She could launch from the ground to the roof of our house or a neighbor’s house in a single bound. At night I could hear the wooden gate rattling outside my bedroom window when she would jump up on it… that is the only sound she would make as she stalked through the night but it was enough to let me know that she was there. She spent a great deal of her time high above the ground walking along fence tops or roofs in the darkness and shadows like a Ninja.

She spent most nights out all night but was always at the door the next morning early at dawn waiting to be let in for breakfast and then she would spend the day sleeping on the stool next to my chair in my home office if I were there or in my chair if I were not. She also liked sleeping on top of the bookcase in the living room under a down light which kept her warm. Another part of her regular routine was her demand for attention…if she wanted to be fed, or let outside, or have her litter box changed… she would make her feelings known to us without any question… She was very insistent on being held and caressed when she was in the mood for affection. She would bump her head against your leg and demand to be picked up and hugged. She would play bite but never hurt us or scratch us even when she pretended to disembowel your hand with her hind legs when you tickled her tummy.

I have never known a better hunter. She was always leaving us tribute on our front door step or on the back patio in front of the sliding doors, in the form of mice, rats and all manner of birds. One time when my wife was sick in bed, Xena came running in the front door and down the hall towards the bedroom with a live mourning dove in her mouth with its wings flapping on either side. She intended to give this to my wife to make her feel better and was terribly insulted and hurt when I took it away from her and let it go free. This was not the hunter’s code of conduct.

In six years she had never run away not even once. At first when she did not come home we didn’t talk about it but by the third day we could no longer ignore it. We went to the local pound looking for her but she was not there. We went back every few days and we also put up posters all around the neighborhood which unbelievably, self righteous old retired people spent their idle days going around ripping down. There was even a letter to the editor in our local paper complaining about posters on public utility poles and how it was against the law. I am not sure how a community is supposed to communicate with itself but that is a different topic.

While on the phone with one of my best friends in Tehran, I suddenly remembered that when I had visited them in 1966 for the summer, that the last day of my visit, their maid Roya started crying hysterically because their favorite cat and mother of all their other kitties had run away. My friend remembered that incident also. He said that the cat’s name had been Mojgon. Anyway Mojgon used to run away all the time probably to meet her boy friends because she was not spayed. My friends kept telling me not to worry because cats run away all the time but that they always come back and that Xena would come back.

But I knew better. We were her family and Xena was very, very loyal to us and she was much too clever to get hit by a vehicle or caught by a raccoon or a coyote. Her only downfall was that she was very friendly towards people. I just had this feeling that someone from another neighborhood or even another town had enticed her into their arms and stolen her because she was so beautiful. My wife feared that some sicko had caught her and tortured her to death because she was the third cat in our neighborhood to disappear this summer.

As each day passes I feel a greater sense of loss, so accustomed was I to having her around, her silent dignity and grace was a joy and comfort to behold. As I find myself missing her and regretting that I had not even been able to say goodbye… not to mention the sorrow of not knowing her fate… I began to imagine what it would be like to have a human member of your immediate family disappear. How often I have passed bill boards in cities and on the sides of freeways which families have paid to put up, with a picture of their missing loved one asking for anyone with information to contact them. There is one of a beautiful young Iranian American girl which I have noticed in my peripheral vision for years on a street in Berkeley and which I saw a newly installed bill board of her on HWY 101 near Redwood City recently. It is years now and the family still holds out hope. I have even found myself praying for them that they find her.

And then I started thinking how in the USA, people disappearing is either due to alienation and domestic abuse leading to running away or the disappearee is a victim of random, anonymous, criminal violence because our main social ills here, I believe, are caused by lack of real community, while in other countries, the State is behind it… how many people disappeared in Argentina or under Augusto Pinochet in Chile or at the hands of Savak or Vavak? Can anyone, who has not experienced such a thing, even begin to imagine the agony a family goes through?

There is something just so unthinkably horrible about the silence, the vacuum, the hole in the world of those left behind wondering; when one day you wake up and your loved one has just silently disappeared without any note, or physical altercation or a single sound, no phone call, no witness… nothing, just a void… there is a surreal quality as if the person never really existed and you only imagined them, you find yourself almost questioning your own sanity…there are few things I can think of that violate the human spirit as much as this, not even torture… and then you can prove nothing and if you accuse or protest against a disappearance to your government, you place yourself in peril as well and yet think of all the brave mothers all around the world living under tyranny who risk their own lives to protest this everyday…

I, for one, dream of a world where people will not be totally erased for their beliefs…