Someone stop this train! 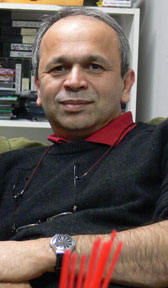 Ebrahim Nabavi wrote this last week. I found it interesting and translated it:

It has been six months that we, Iranians, are approaching a fall in the train of fate. Meanwhile people who have the power to intervene are in different conditions:

Ahmadinejad: He welcomes a war. If a war begins he hopes that the world would come to his rescue and USA would be trapped in the quagmire of Iran. USA would be defeated and he and his friends would be war heroes. They could move against his rivals and get rid of all opposing factions and social groups. They would rule Iran comfortably without fear of domestic opposition. Ahmadinejad believes that disturbing world is the preface to the coming of Imam Mahdi. He is a dangerous person; all with final and uncompromising beliefs are very dangerous in the position of power.

Ayatollah Khamenyi: His Eminence hopes all ends well. No head of government exhibit the obedience that Ahmadinejad has shown him. His Eminence also is worried if the opposition takes over the country, if Ahmadinejad falls. Ayatollah Khameneyi believes that reformists, Mr. Hashemi or Khatami would hurt the religious establishment, Islam and Shiites. He is under the impression that USA does not dare to attack Iran.

Ali Larijani: Dr. Larijani knows that USA want to attack Iran, but he thinks since the cost of war is too high Americans are wise enough to avoid a new adventure. If he could, he would resign not to witness a war. He hopes that he could stop an insane war at the last moment.

Hashemi Rafsanjani: He knows that war will come and more than anyone he wants to stop it. He would if he had the power. He lacks the maneuverability to negotiate with Americans and to compete with Ahmadinejad at the same time. Americans are losing all their opportunities and want to find a final solution for their issues with Iran. Despite everything Amadinejad still hopes to have one last chance to negotiate. Hashemi-Rafsanjani is a chess player with 10 seconds for each move.

Public: Iran society, public and the middle class are buried under economic crisis, insecurity, tensions, fear and psychological bombardment of government controled media. Those who know how bad situation is are silent. They cannot do anything (to stop a war) so they prefer not to seek any news or to think of any danger.

Iran Military Forces: Iran military forces, especially IRGC and Basij, are preparing themselves to fight a guerilla war on the ground with the enemy and to administrate the country through entering public administration system and assuming positions within government bureaucracy. However it is less likely that Americans fight a ground war.

Islamic World: Ruling elites and governments of Islamic World have realized the threat of a revolutionary Iran. And they are more afraid of Iran than USA. Muslim nations are mostly Sunni and they are afraid of Iran as well. It must be pointed out that in most countries with fundamentalist tendencies dictators or absolutist elites rule whose relations with Iran have become sore in the last year.

USA: Bush Administration has been preparing global opinion and American public for an attack on Iran. Ahmadinejad also has provided them with many ample opportunities that guarantee Iran’s defeat in a psychological warfare. The USA have little time to lose. It seems that President Bush administration will lunch a destructive military campaign against Iran sometime soon. A disaster awaits us, Iranians.

The train of war is speeding. We could close our eyes and do not witness the crash, but the truth is that drums of war are being beaten. In this train there is no wise man that could stand up and grab the brake handle. I am afraid of tomorrow.