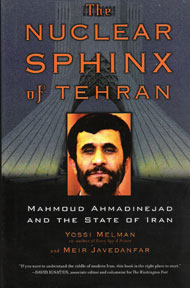 The Nuclear Sphinx of Tehran
Mahmoud Ahmadinejad and the State of Iran
by Yossi Melman and Meir Javedanfar Book Description Inspired by hate and surrounded by fundamentalist leaders in a country that may soon possess nuclear weapons, Mahmoud Ahmadinejad poses the most serious threat to world peace, even while he shrewdly manipulates public opinion at home. Until now, Americans have known little about him. Since his election in June 2005, Ahmadinejad has accelerated his country’s nuclear research; called for the elimination of Israel; and failed the Iranian people, who elected him on a since-neglected domestic platform. In this first book about him, we see the forces that are bringing the world to the brink of another war in the Middle East. Written by an Iranian-born insider and a world-renowned intelligence expert, it offers the first full portrait of this former mayor of Tehran whose rural roots and vituperative populism catapulted him from obscurity to national leadership.

EXCERPT
“MY DAD WAS an ironmonger,” said Mahmoud Ahmadinejad, in Tehran Radio’s studio 4, during a preelection interview. “He worked very hard so I could go to the University of Science and Technology and study civil engineering. But in 1993 Father passed away due to an accident.”

A year later Mahmoud Ahmadinejad, president of the Islamic Republic of Iran, helped lower his father’s coffin into the grave. Ahmad Ahmadinejad died in 2006 from heart complications, not in an accident in 1993 as his son had claimed in 2005. No one is quite sure why Ahmadinejad told such a palpable lie so publicly. Perhaps he thought he could shield his family from the public spotlight. Or perhaps he was trying to hide something.

He was not, however, trying to hide his father, at whose graveside he showed deep grief and full respect alongside his brothers and sisters. Mahmoud Ahmadinejad had visited his father frequently during Ahmad’s illness and, in November 2005, canceled a planned visit to Tunisia because of his father’s ill health.

The funeral of Ahmad Ahmadinejad offers a glimpse into the mysterious life and beliefs of his son, the president of Iran, one of the most influential leaders in the international arena. From beginning to end, the ceremony was carried out in strict Islamic fashion. Everyone in the large crowd of mourners, including Mahmoud Ahmadinejad, wore black, the color of mourning in Shiite Islam. Members of the public and government officials filled Narmak mosque. They prayed and afterward beat their chests rhythmically to the sound of drums. This is similar to the rituals of Ashura, the Shiite tradition dating back to the death of Imam Hussein, the third Shiite imam.

Ahmad was a popular figure in his community and a deeply religious man. Legend has it that he prayed every day of his last thirty years in Narmak mosque. His family in his native Aradan province told visitors that he had refused to eat at the table of people who did not pay Zakat (Muslim alms). According to relatives, when he sold his house in Tehran for approximately $55,000, he donated half to charity.

After Ahmad’s grave was covered in flowers, Mahmoud Ahmadinejad thanked the mourners and offered them a story about his father. He told them how his father had been a devoted follower of the martyred Imam Hussein, contributing money to the Ashura ceremony each year—save one, when he was having financial difficulty and genuinely could not afford to help. He felt so guilty about this that he became exhausted and started having nightmares. Then one night he dreamed that someone came to him and said, “Don’t worry, Ashura has its own master. It will look after itself.” The next day he ran into a friend in the bazaar. Upon learning of his predicament, the friend immediately offered to lend him money. Ahmad’s dream had come true.

For seven days after his father’s death, Mahmoud Ahmadinejad did not smile once for the cameras. His lips cracked open only at the sight of a group of visitors whose profession had given him many happy memories: the Iranian national football team.

The year that elapsed between the announcement about the fictitious death of father and the real one, the emotional funeral, and the sudden change of mood in front of his heroes—perfectly exemplifies the enigmatic nature of the Nuclear Sphinx of Tehran.

This article has appeared at pajamasmedia.com
Meir Javedanfar is the co-author of “The Nuclear Sphinx of Tehran –
Mahmoud Ahmadinejad and the State of Iran . ” He runs the Middle East
Economic and Political Analysis (www.meepas.com)