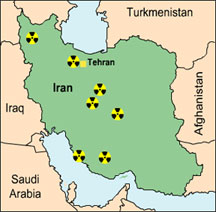 TEHRAN — Most Iranians agree that we have the right to the peaceful development and use of nuclear energy and international law grants Iran this right. However, there is a strong case for abandoning our nuclear energy program and instead investing in solar energy.

that shows a map of northern Africa and how little of that area needs to be covered with solar thermal panels in order to provide energy for the entire world.

Solar thermal energy plants can easily be built with existing technology in Iran. We have plenty of desert space and plenty of year round sunshine. And we have the raw materials and engineering skills so that we would not be dependent on foreign assistance.

Iranians need to ask themselves if we are going down the right path by placing our nation in danger because we insist on developing a nuclear program that is based on 60 year old technology.

Did we not learn anything from Chernobyl?

No solution has been found to safely dispose of nuclear waste. Decommissioning nuclear power plants costs more than building them.

Is our nuclear program an attempt to show off to the world that we are no longer a backward country? But if that is the case then why are we spending all this money on outdated technology that is mostly acquired from non-Iranians?

Are we defending our right to nuclear energy because we don’t want to be pushed around by other nations? But isn’t our nuclear program in actual fact creating a big excuse for other nations to push us around?

The truth is Iran has far better options than nuclear energy to meet its energy needs.

If Iran invested just fifteen percent of its annual oil revenue towards building solar power plants it could power the entire nation and also convert the entire transportation system to use electric powered vehicles and still have excess electricity to export. This can be achieved in less than ten years and have the added benefit of eliminating automobile pollution in our cities.

Taking the solar path would mean becoming the leading producer and consumer of electric powered vehicles which would place Iran in a leadership position that would translate into hundreds of thousands of employment opportunities.

The current decision makers of Iran are making a mistake on insisting that we must develop nuclear technology, for whatever reason. Iran has the know-how and the perfect geography to become the first solar powered nation.

Taking the nuclear path is not in Iran’s national security interest and it is time the Iranian people woke up to this fact.