To keep it the Persian Gulf 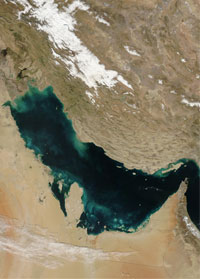 This website, and many other Iranian ones, have for some time already been inundated by blogs and threads about a possible danger, the danger that the name for the gulf that is located in the Middle East, south of Iran, to be named Arabian Gulf, from its historical name of Persian Gulf.

The concern is indeed genuine, and I quite agree with it. Many changes in this world, especially in the world of mass communications, democracy, lobby etc, take place not necessarily because the change is right, but because the change is well promoted, propagated and sustained. So, the Iranian community is doing its right bit to take preventive actions against the possibility of this name change, in the future. The name change has been on the agenda of Arab nations in the Middle East for decades, far before the Islamic revolution in Iran.

If the name of the gulf will be changed it will be a very significant blow to the Persian identity. Some in the West may even think that the last remnant of the Persian people was erased simply because Persians have long disappeared. Even today it is quite tricky to make Westerners understand the difference between an Iranian, or a Persian Iranian, and an Arab. The word Persian sounds more like something from the history book, rather than the name of a people.

When an Iranian says that he is a Persian, the Western counterpart may think for a bit that he is dealing with an almost extinct human species, about whom he once read in the history book when he was little. Of course, this doesn’t apply to the more informed individuals. It can very well apply to the average Joe though. And in today’s world of Arabophobia, it seems quite reasonable for some not-so-confident Middle-Eastern Joe to say that he’s a Jew in case he’s an Arab, and that he’s Persian in case he’s an Iranian.

A couple of months ago I was amazed to see a couple of Arabs who told me they were Jewish. Of course I am not so unfamiliar with Middle-Easterners not to notice the difference between Hebrew and Arabic. They were speaking Arabic with each other (with the unique pronunciation of Arabic H, like in Habibi, and DH, like in Ramadhan). The Arab guys were chatting and happily entertaining with their Christian colleagues who had been told that they were Jewish. The other guys joked about Arab terrorists (knowing that they were dealing with Jews), and even went as far as subtly attacking Islam, and the Arabs were quietly concurring. And I was restraining myself from laughter.

I also met, quite interestingly, a couple of Iranian folks at the same place a few days later. When I heard them talking normally I went to them and they were very happy to know that I was an Iranian too. Iranians always ask each other which part of Iran they come from, so they told me, I told them, and after a while I started joking about my Turkish accent, they laughed, and so on.

This is the fun part of being the citizen of a badly managed semi-empire, of Middle-Eastern flavour. But we are always very happy to find each other and it is amazing how we Iranians get along with each other, and never really have the balls to say anything bad about each other, except when we are not heard or seen directly. We do have our little differences, contentions and stupid fantasies and unrealistic ideas that do surface once in a while and never really go any further than empty rhetoric and gibberish. These are also probably some relatively sinister parts of the beauty of our Middle-Eastern origins.

Going back to the main subject of this article, it was quite interesting for me to see a pathetic video of some well-dressed (probably from northern Tehran) Iranians who were chanting outside the UAE embassy in Tehran, protesting against their desire to call the Persian Gulf, Arabian Gulf (or Khalij Arab). Well, it is nice to see Iranians bold enough to initiate protests on their own, probably with no government backing! I doubt the Iranian government would send those Western-looking stylish Tehrani women to protest for something, for anything! It is something pretty new for Iranians to protest about such issues.

But isn’t it pathetic for Iranians to protest against the government of the UAE? What the hell! Some years ago Iranians would have simply gone there, burned down some date palms, hanged some Sheikhs, beheaded a few innocent people, and taught them a lesson (for some, or no, reason). How ‘low’ have we come now? Now we are PROTESTING against such a small government? Okay, joking aside, it really is pathetic for foreigners, non-Iranians, to see something like this! Why do Iranians care some Arabs call some place with this or that name??? Did anybody ever protest against Iranians calling the Caspian Sea, Khazar?

One thing is to protest, officially or even by street demonstrations, against the International community, the UN, or maybe even a large and powerful country like America, for saying or doing something against the Iranian NATIONAL INTERESTS, and a completely different thing to protest what the government of a small country does on its own choosing. So, tomorrow we are going to see Iranians protesting against the government of Papua New Guinea’s decision to name their children after Iranian pistachio species?

And on the final note, how do Iranians explain names of so many many places, things, dates and buildings or locations inside Iranian Azerbaijan that have been changed from Azeri to Persian? That wasn’t so nice, brotherly and sporty, was it? Just think about it!�

PrevPreviousIran rejects nuclear inspections unless Israel allows them
NextThese are the days of our lives!Next