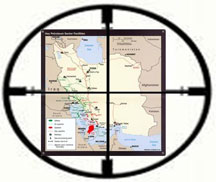 The most aggressive posturing and accusations against Iran, yet issued by Washington, signal the rapid closure of the window of opportunity for peace which opened up following the release of the US’ National Intelligence Estimate in December 07 concluding that there was no evidence of a nuclear weaponisation programme in Iran. This revelation which was concordant with the IAEA’s own repeated assessment over 5 years of intrusive inspections, and which had been held from publication by the Vice President Cheney for over a year with the aim of altering its key findings, put a spanner in the frightfully accelerating wheel to another war and a potential inferno in the Middle East and beyond.

However, it seems that the war camp led by Cheney have regained the lost ground and are furtively peddling for war before Bush leaves office next January. Bush’s speech to the Israeli Knesset, 15th May, evoking, once again, the spectre of the world war, likening Iran to 1938 pre-war Nazi Germany, and rebuking Obama’s willingness for dialogue with Iran on par with ‘appeasement of Hitler’, followed by the reporting of the Israeli army radio of behind the doors expressions of intent by the US to