More than a cause 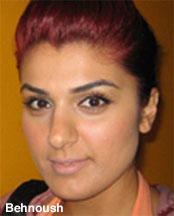 Behnoush Babzani organied a bone marrow drive at Campbell Community Center in the San Francisco Bay Area earlier this month. She kindly answered my questions about her motives and more…

* What makes you motivated to help with organizing a blood drive?

I was diagnosed with a rare blood disorder and my doctors told me that my only chance of survival is if I have a bone marrow transplant. The doctors were telling me that the only way that I could live is if somebody else would give me some of their bone marrow!

I only have one brother and he miraculously was a perfect match for me. I was hospitalized for 42 days and had a successful bone marrow transplant. I am now cured.

Unfortunately, in the process of my treatment I met a lot of other patients with similar and even worse illnesses who were in desperate need of a marrow transplant but were unable to do so because they did not have a donor. As I sat there healing and becoming more and more healthy, these people were losing their battle at life because they needed a complete stranger to step up and be willing to donate a day out of their lives and a couple pints of marrow. I actually saw the progression of their illness take over them and they eventually lost the battle.

I made a promise to myself that when I am better and able to live a normal life, I will dedicate my life to educating people of the significance of donating marrow and how truly important such a gift is to patients in need. The only reason that I am alive today is because my brother was able to overcome his intense fear of hospitals and needles and donate the marrow that now keeps me living.

* Who were the other organizers of this blood drive?

I am the community service director for a non-profit organization called Iranican. Iranican’s mission is to raise awareness of cultural and social issues along with a message that promotes unity among the Iranian Americans of our community who share modern and traditional mentalities. For more information on our team you can visit www.iranican.com

We organized this drive with the help of the National Marrow Donor Program (NMDP) which is an organization dedicated to spreading awareness of the need for more donors on the national registry. This was Iranican’s second annual marrow drive. Last year we held the drive during the month of May which was during the Mother Campaign for the NMDP and during this month we helped to add over 700 new donors on the registry.

* Who is the potential beneficiary of the drive?

There are thousands of people who are in desperate need of a transplant and are seeking donors. A common mentality is that people will not think to do something like be a donor unless somebody they know has been affected by cancer or blood disorder. People are more inclined to donate if they can have a connection to the recipient or their family. This is how I felt before I was affected and it is completely normal to think this way. However, I hope that one day we can get to the point where we don’t have to only do lend a helping hand to our loved ones, when there is somebody else’s loved one in need of the same help.

This year the drive was primarily for a young Iranian-American who has been diagnosed with Leukemia and needs a bone marrow transplant as soon as possible.

I would like to do anything in my power to help find this young person a match so that they can go on to live a healthy successful life.

* How many Iranians do you know who have benefitted from bone marrow transplant?

I personally know of three Iranians – including myself – who have had bone marrow transplants and full healthy recoveries. I wish I could give you a bigger number for successful transplants, but that is all that I know of on a personal level.

Sadly, I also know of those who did not receive a timely match. When I was first diagnosed in 1996 I met a young angel, who was actually older than me, who had Leukemia and she needed a transplant. She had a few siblings and none of them were able to be a match for her. She had several marrow drives held for her to find a donor and the Iranian community really came together to help this beautiful young woman. She had the best attitude about life and really gave me so much support and hope for her and myself as well. She would tell me over and over again that I will get better and to keep a positive attitude and that will heal everything. She was positive, happy, strong, beautiful… but all these things meant nothing if she did not have donor to keep her alive. My angel friend was unable to find a proper donor and lost her life.

She is a major inspiration in my life to get more donors on the registry. I have been contacted by other Iranian families who were in need of transplants and did everything in my power to spread the word in the Iranian community, however, we were unable to get enough people to be tested to see if they were a match and the patients could no longer hang on to the little life they had left.

* Do you think if the Iranian community is well informed on this issue?

There are people in our community who are not familiar with the issues facing those in need of help and transplants, or I am sure they would have helped more actively.

There are also a great number of Iranians who understand the issue and the need. When I began spreading the word about this drive, I cannot tell you how many Iranians called me to ask what it is they can do to help. It makes me so proud of our community and hopeful for this young person in need. So, I can truly feel that people want to help but they may not know how they can do so. My goal is to send the message to all the Iranians that helping is very simple and anybody between the ages of 18-60 can do it.

* What is bone marrow testing? Can anyone participate in it? Does the test cost anything to the participants?

Bone marrow testing is based on your white blood cells where they do human leukocyte antigen (HLA) testing, which is made up of 6 components. So, a perfect match would be 6 out of 6.Any body between the ages of 18-60 is able to participate and join the registry. Due to the lack of minorities on the registry, it is free for minorities to join. There is a small cost for Caucasian donors, however, we are raising money and the NMDP is covering the remaining costs for this drive so that anyone who would like to participate does not have to pay. So it will be free for donors at this year’s drive and if anybody would like to, we are accepting donations as well.

Testing is simple and there is no blood involved. You can come down to the drive and you get your cheek swabbed, which is fast and painless. You are then placed on the donor registry and will be a possible match for a sick patient in need. If you would like more information on the process of donating you can check out the NMDP website at www.marrow.org and learn more about it. I am also always excited to talk to those who have questions about donating or those who are getting ready to have a transplant.

* How long does the registry keep the records for finding possible matches for new patients?

Once you sign up to be on the donor registry you are on it until you either take yourself or until you are no longer eligible to donate (being over 60). So if you have joined many years back, you are still in the system. It is important to let the NMDP know if you have changed your contact information to make it easier for them to notify you in the event of a match.