Moral advice from a criminal 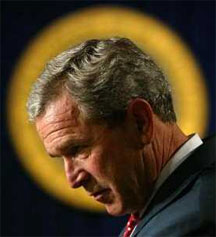 I was shocked when I read that George Bush advised the graduates at a college the other day to “act responsibly” in their adult life. He told of his dream for a “culture of responsibility” to spread in America so people stay away from too much drinking, sex, and drugs. This immediately reminded me of that proverbial Iranian story about an elementary school teacher who had trouble pronouncing some sounds. When he tried to teach the first letter of the alphabet, his students heard “anef” instead of the correct version, “alef.” Naturally, they mispronounced, too. So he got impatient and yelled “when I say anef, don’t say anef, say anef” not realizing that the kids were copying him faithfully.

So how should those clueless new graduates behave as they step out into the real world after George Bush’s sermon? They do need guidance, but guidance from what sort of leader? As a parent of a new graduate, it matters to me who tries to influence our young. Should they do as Bush tells them or act like he does? Should they, too, “act responsibly” and terrorize innocent civilians on the other side of the world and lie about it?

After all, this jihadist is in the spotlight every day as the president of the planet’s sole superpower. So we should want to be like him, right? Should the new graduates rob the poor to give (tax breaks) to their corrupt, rich friend, as Bush does proudly in the neme of freedom? That’s “responsible”, isn’t it? Should they spend all the money they can possibly borrow on insane, failed ideas but tell the rest of us to exercise fiscal restraint rather than declare banruptcy? Should our graduates totally screw up the first project that’s entrusted to them and leave the mess to their successors? Should they, like holy George, expect only others to sacrifice for the common good?

The twenty-something generation must be confused as hell, especially when the topic is something as awesome as “r-e-s-p-o-n-s-i-b-i-l-i-t-y” and the person advising is the Leader of the Free World! Many must be wondering whether drinking too much is more irresponsible or the mass murder of over one million Iraqis? Good question, especially when you consider that the Americans most likely to die in Iraq or come home paralyzed don’t get to hear the President at graduation. They’re in the military because they can’t afford college in the richest country on earth.

But really, what should we tell our sons and daughters as they embark on their careers? That it’s irresponsible to sleep around, but not reckless if you let hundreds of thousands of hurricane victims to fend for themselves in New Orleans while you’re fundraising for the Republicans in California? Should we, too, pretend it’s virtuous to let your greedy political allies rob tens of thousands of shareholders and employees, as Bush did with Enron Corporation?

Probably no one understands the confusion George Bush’s campus audience experienced the other day better than US-backed Middle East tyrants. One day, the CIA sends them “terror suspects” to interrogate with torture; the next day George Bush shows up lecturing them on virtues of human rights! They, of course, know it’s all a game. But what about America’s youth? Are most of them mature enough to see vulgarity in high places behind the fig leaf?