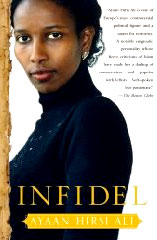 Ayaan Hirsi Ali’s life is a narrative of sexual repression and gradual emancipation. She became who she is today (Time magazine listed her as one of the 100 most influential people in the world) by redescribing Islam and reacting against radical Muslims – real live people whom she had met in the flesh, not in the book.

“I left the world of faith, of genital cutting and marriage for the world of reason and sexual emancipation. After making this voyage I know that one of these two worlds is simply better than the other. Not for its gaudy gadgetry, but for its fundamental values”, Ayaan Hirsi Ali wrote in her autobiography Infidel.

She wanted to create herself by writing a narrative about the people who had offered descriptions of her: People who tell their school girls who were not circumcised would be possessed by devils, and who are consequently sure of entering the gates of Heaven by slitting your throat? And so Ayaan and her sister had their genitals cut.

In fairness, female circumcision is not a an Islamic custom as such, only practiced by some clannish communities. She writes, “Excision doesn’t remove your desire or ability to enjoy sexual pleasure. The excision of women is cruel on many levels. It is physically cruel and painful; it sets girls up for a lifetime of suffering. And it is not even effective in its intent to remove their desire.”

Hirsi Ali’s story and views are good example of what Joseph Schumpeter thought of as “unflinching courage”, he said, “To realize the relative validity of one’s convictions and yet stand for them unflinchingly, is what distinguishes a civilized man from a barbarian.”

In a speech given in Berlin in February 2006, she said, “I do not seek to offend religious sentiment, but I will not submit to tyranny. Demanding that people who do not accept Muhammad’s teachings should refrain from drawing him is not a request for respect but a demand for submission.”

There is an intellectual scandal in Europe: liberal-cum-socialist thinkers and academics, who met no terror in their lives, have turned on a woman who is isolated, threatened with having her throat slit by Jihadist mafias and surrounded by bodyguards.

In the eyes of our European apologists, and fellow travelers who stand ready to disown their liberal convictions, she is charged with being “Enlightenment fundamentalist.” She has committed unpardonable offenses on two grounds:

First, she has broken the spell of multiculturalism over the minds of liberal intellectual in Europe by disowning it as cultural-apartheid camouflaged as respect for diversity, by refusing to park herself into the redescribed ghetto of her particularity. Second, she has taken the liberal values – in particular the freedom of speech – seriously.

Ayyan Hirsi Ali wants nothing to do with a mindless and stupid cultural relativism – with the idea that any fool thing that call itself culture is worthy of respect.

Whereas the relativist thinkers demand that we see liberal values simply as the beliefs of the particular tribe we call the West, and the idea of “universal transcultural human rights” is a philosophical pipe dream, she thinks the good liberal demands that liberal values belong to the entire human race, and multiculturalism is a racism of the anti-racists, chaining people to their roots, and denying them a free passage from one world to another, from tradition to modernity, from blind obedience to rational decision making.

Ayaan Hirsi Ali is the embodiment of the universal freedom of speech and for this she is risking her life. It is upon the European Union to provide her protection, now that she is no longer protected by Holland. What is wrong with Europe?