From honey to ashes 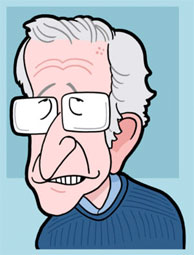 I always thought that if I ever wrote anything against Noam Chomsky all my ancestors would rise from their graves – and I’d just have to bury them again, as Groucho Marx once said. But that was the Chomsky of old times, when he was regarded as “Einstein of Social Sciences.” That claim about him, however, today no longer seems to hold water.

As Hegel said, “philosophy paints its gray on gray only when a form of life has grown old.” Chomsky did not know that his purpose was philosophy of language, not international politics, never mind the Middle Eastern politics. But we now know this thing, to paraphrase Richard Rorty, “for we latecomers can tell the kind of story of progress which those who actually making progress cannot.”  We now know that with the collapse of Berlin Wall, Chomsky collapsed, too.

By the Balkan wars of the 1990s, Chomsky has already denounced Vaclav Havel, a real dissident against arbitrary power, while openly defending the dictatorship of Slobodan Milosevic. He showed no solidarity with tolerant Muslim minority of Bosnia and Kosovo when they were prosecuted, deported, and murdered by the Serbian forces. It is thanks to American humanitarian intervention that these Muslim communities were saved from total genocidal attempts that was taking place in the backyard of Europe. Chomsky only became interested in Muslim after 9/11 when the extremist Muslims have become the perpetrators.

In his Love, Poverty, and War, Christopher Hitchens nicely sums up that: “if a supposed scholar takes the Christian-Orthodox side when it is the aggressor, and then switches to taking the “Muslim” side when Muslims commit mass murder, I think that there is something very nasty going on. And yes, I don’t think it is exaggerated to describe that nastiness as “anti-American” when the power that stops and punishes both aggressions is the United States.”

Chomsky went on to rationalize, here, the Al Qaeda terrorist attacks in the 9/11, arguing that the death toll was minor compared to the list of victims brought about by the U.S. foreign policy. He notes, “for example, Clinton’s bombing of the Sudan with no credible pretext, destroying half its pharmaceutical supplies and killing unknown numbers of people.” His message was simple and clear: the U.S. only had itself to blame.

This line of argument received its low point with the release of Fahrenheit 9/11, written and directed with Michael Moore, who is called Moqtada al-Moore by Iraqis intellectuals, since he represents Moqtada al-Sadr as a “national hero.”

In an interview, published in Iranian.com, Chomsky disgracefully claims that the United States is more fundamentalist than Iran. What is more sickening is his ambivalent attitudes toward the question of democracy in Iran: “if Iran opens up in such a way as to subordinate itself to the general neo-liberal order I think it will be very harmful for many people in Iran, probably the majority. So opening up is a mixed [blessing].”

From the imperial safety of his neo-liberal suburban Massachusetts home, Ayatollah Chomsky is here to tell the Iranians like the children who do not like taking medicine, prescribed by the Islamic doctrine, that the reason it tastes bad is that it is good for you, since it prevents the deadly virus of neo-liberal flu.

Tragedy or not, the collapse of Chomsky is for real. He has abandoned the Iranian and Iraqi democrats, feminists, and progressive forces, and joined forces with the reactionaries in the Middle East, criticizing the U.S. who is helping not only the Iraqis and Lebanese to build a workable democracy, but also supporting the democratization of Iran.

PrevPreviousKirilenko leads Russia past Iran
NextPrince of Persia another 300 ?Next