Tanks but no thanks 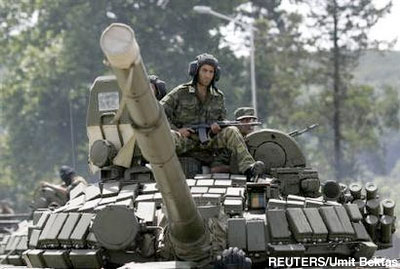 Recent events in Georgia show the new type of battle that is likely to rage for decades to come, between what is remained to challenge democracy in the world, beside terrorism, which in reality is not a serious challenge toward democracy, but just a historically never-ending struggle (in a gruesome way) of the humiliated against the powerful. Terrorism has always existed in various forms and shapes, which was very active also about a century ago, and was known as Anarchism. Today it is called Islamic extremism, and in the future there will be other types, more or less powerful.

However, the most serious and credible challenge toward democracy comes from more powerful ideologies that are more able to attract crowds and resources. The last of the truly powerful ideologies facing democracy was Communism, and Fascism before that. Today it seems that the new order has only left one single challenge, and that is imperialism. Both Communists, and Fascists, tried to create empires based on their ideologies as well, but their already accepted failures have left societies that are not yet ready for democracy in an identity limbo. And their governments, whenever powerful enough, reject modern democratic values, pursuing the same old urge of using their powers for expansionist purposes.

That is still a great challenge for democracy in the world, and it shows little sign of abating. Undemocratic and imperialistic countries like Russia, China, Sudan and Iran, see it fit even to unite with each other in order to challenge democratic values. And the regimes of these countries are not necessarily always unpopular, especially when faced with outside risks. Very often their national identity has been built around the idea of an empire, and their populations are not necessarily ready to ask for democratic rights from their regimes. But one thing is clear, that these regimes are not democratic, have no wish for democracy, and they are powerful enough to challenge the democratic world, especially in their immediate neighbourhood.

Although many of our fellow readers think that America is just another empire, the fact of the matter is that America, no matter how it behaves outside its territories, is a democracy. American regimes have over time proved to be some of the most democratic in the world, and they have shown that they are also, practically and ideologically, interested in promoting democracy in the world. The defeat of Germany and Japan in World War Two did not mean an American exploitation or domination for these nations, but the beginning of an era of democratisation and prosperity. The same has also been the case for Taiwan, South Korea. America has protected democratic regimes whenever it has been possible. There have also been mishaps. Nothing made by human beings will ever be perfect. And no democracy will ever be perfect.

The current conflict in Georgia shows the proxy battle between an empire, a very strengthened Russia, and democracy. And we shall not take the situation lightly. Democracy may be threatened much further in case the democratic world becomes too cosy in its appreciation of its powers and perspectives. It has not been historically proven that democracy always wins. Whatever resemblance of democracy Rome or ancient Greece may have developed during their glorious days, they eventually succumbed to what they called the Barbarians, who indeed had no intentions or aspirations for democracy. This was in part the consequence of their internal short-comings and corruptions but also due to their arrogance; the belief that they could not be challenged by other less sophisticated empires, but they were wrong.

The advances in technology and economic activities have provided the best conditions for empires to strengthen and be able to challenge democracy. Russia, Iran, and Sudan are selling oil to the West, while China is using its labour market. All these possibilities have been provided by the progress that the democratic world has undertaken. This progress has been offered to the undemocratic world, and the undemocratic world is little by little gaining such an strength that it is becoming a true challenge to democracy. And one obvious example is what is taking place now in Georgia, where a democratically elected government is openly abused and threatened by an imperialistic neighbour whose sole purpose is to destabilise the neighbourhood in order to exert undue influence and, in some cases, overt occupation. And, as mentioned earlier, these undemocratic regimes are very often able to unite in the face of the ideology of democracy, though in reality they are always thinking about the elimination of the others, as the mentality of any true empire would suggest. This is not the mentality of America however. America, unlike a genuine empire, believes in friendship and competition, bilateral interests and democratic values, not domination, exploitation and subjugation.

Hopefully the democratic world, especially America and Europe, will unite and defend aspiring democracies and fragile democratic regimes, so that the future of a humane and democratic world would not be in jeopardy. The current conflict in Georgia is not just about Georgia, or its national rights and sovereignty, but it is an important point where democracy meets imperialism and expansionism.