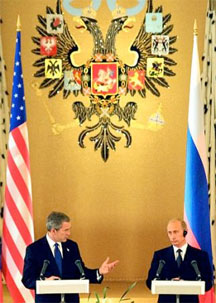 Recent developments in Georgia have confirmed many fears, including that of mine, that Russia’s imperialistic intentions are very serious and the democratic world needs no complacency toward such brutal acts against democratic movements of other nations, the one of Georgia in this particular case. When I wrote an article (Tanks but no thanks) a few days ago about the events in progress I was thinking about a few issues that I was absolutely sure would come up in the comments I would receive. The questioning is absolutely legitimate and worth serious consideration and debate.

We know that America did invade Iraq. We know what happened in Iraq after the invasion. So many innocent Iraqi lives were lost, children, women, and elderly, who as the consequence of the chaos that ensued were murdered, harassed, or their belongings and livelihood plundered! Why all this happened? It is obvious. If there was no American invasion to remove Saddam Hussein there could have never been these horrible consequences and many innocent Iraqi people would have been spared the needless suffering. This is an undeniable fact.

I have acknowledged even before that I supported America in its decision to invade Iraq and remove Saddam Hussein. I was, like many others, also disappointed at how the Bush administration handled the post-invasion conditions in Iraq, how they idiotically and arrogantly disbanded the Iraqi army and neglected the civilian population and their lives for a very long time without any powerful Iraqi central authority. It is quite simple,  America’s adversaries are free to accuse America of very many things, including that of invading a sovereign nation, Iraq, and (illegitimately) removing its (illegitimate) government, and later mishandling the post-invasion situation; the chaos that followed.

So, one simple question has come up now: If America invaded Iraq and removed the Iraqi government, why shouldn’t we accept another superpower (semi-superpower actually) doing pretty much the same thing in its own backyard? Why should we hypocritically bash Russia for something that so far seems far smaller in all spheres of appreciation? These are indeed very legitimate and normal issues and any person can make comparisons and draw conclusions, one way or the other. The facts on the ground cannot be denied, and the past can work both ways, for the so-called US empire, or the Russian one!

But there are some differences that are so fundamental, but at the same ideologically apart, that only the judging individual (in this case the reader) can freely draw his or her own, and very much possibly different, conclusions. What is so different between what happened to Iraq, and what is happening to Georgia that makes someone like me support America but not support another bully, Russia? The answer is this, America is a genuine democracy, while Russia is far from any sort of true democracy. Is any genuine democracy free to invade other countries? No, absolutely not. But here we are talking about individual cases.

Philosophically and legally speaking, America had no right to enter Iraq and remove Saddam Hussein. However America was, and is, a democracy, which decided, arbitrarily, to remove an illegitimate and tyrannical regime, while Russia, is not a democracy, which is trying to do something a bit less dramatic (than what America did to Iraq) to a democratic (or maybe just an aspiring democracy) country; Georgia. Who should I stand by? A tyranny, or a democracy? I choose to stand by a democracy, the world’s most powerful and one of the most liberal ones, and I also stand by democracy even when it makes mistakes, because this is how human beings (and their chosen systems), fallible human beings, can live with their own not-always-perfect judgements. But democratic systems have the good side that they are open to change and progress, and they too often accept their mistakes and make efforts to make mends.

There are also other issues that may not be fundamental but are strictly related to the past and how each parties’ past can suggest about their present actions and claims. Russia is talking about protecting minority rights, while we know about Russian ‘concern’ about minority rights, when it was the case in Chechnya, or when it was about protecting Slobodan Milosevic and his criminal actions against non-Serbs. While it was mostly America who protected both Muslims and Catholic Christians of Bosnia, and it is America who now is trying to protect the Muslims of Darfur while Russia, China and many other nations, including Muslim ones, are either silent or openly supportive of the genocide that is taking place in western Sudan.

While America has condemned and jailed its own soldiers for misconduct in Iraq or other places, and has also accepted responsibility for misdeeds in Vietnam, Iran, or other places, countries like Russia are not used to taking responsibility for their past mistakes. Has any Russian soldier ever faced any criminal charges for the crimes committed against Russia’s own Muslim population in Chechnya? No. That’s why some people like me, find it extremely hard to believe Russian (or Chinese or Iranian) versions of events even when they may be true or half true.