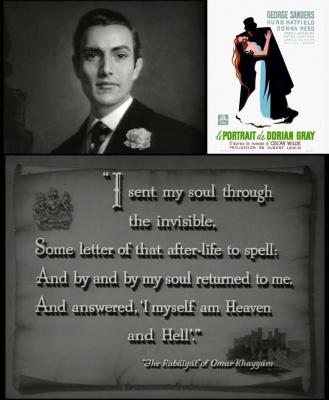 I sent my soul through the invisible,
Some letter of that after-life to spell;
And by and by my soul returned to me,
And answered, `I myself an Heaven and Hell'”
– “The Rubaiyat” Omar Khayyam

The Picture of Dorian Gray, is the only published novel written by Oscar Wilde, first appearing as the lead story in Lippincott’s Monthly Magazine on June 20, 1890. Wilde later revised this edition, making several alterations, and adding new chapters; the amended version was published by Ward, Lock, and Company in April 1891.The story is often miscalled The Portrait of Dorian Gray. The novel tells of a young man named Dorian Gray, the subject of a painting by artist Basil Hallward. Basil is greatly impressed by Dorian’s physical beauty and becomes strongly infatuated with him, believing that his beauty is responsible for a new mode in his art. Talking in Basil’s garden, Dorian meets Lord Henry Wotton, a friend of Basil’s, and becomes enthralled by Lord Henry’s world view. Espousing a new kind of hedonism, Lord Henry suggests that the only thing worth pursuing in life is beauty, and the fulfilment of the senses. Realising that one day his beauty will fade, Dorian cries out, wishing that the portrait Basil has painted of him would age rather than himself. Dorian’s wish is fulfilled, subsequently plunging him into a series of debauched acts. The portrait serves as a reminder of the effect each act has upon his soul, with each sin being displayed as a disfigurement of his form, or through a sign of aging.

The Picture of Dorian Gray is considered one of the last works of classic gothic horror fiction with a strong Faustian theme. It deals with the artistic movement of the decadents, and homosexuality, both of which caused some controversy when the book was first published. However, in modern times, the book has been referred to as “one of the modern classics of Western literature.”

A Classic Hollywood film adaptation was released in 1945 see below.