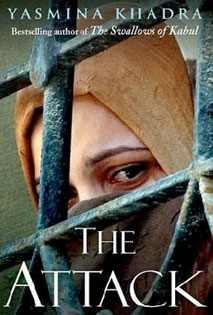 The brilliance with which the 52-year old Algerian novelist and French resident – this novel The Attack was translated from the French by John Cullen – Yasmina Khadra highlights the plight and eternal pain – even if it may be done through compelling fictitious episodes – of families who suffer the curse when one of their own turns suicide bomber, is beautifully fragile while reflective of the primitive decisions that still encompass a modern thinking society today.

When revenge and preaching utterances may be recited in the form of bloodied limbs and confused death calls, such strange doings and structured tragic consequences stay dismissive in theory but hold as real as day; in the murky depths of fanatical events that continue to replay themselves like eerie sounding reels, in hidden corners of the world. Perhaps the most recent being the bombings in a Baghdad market, in Islamabad and in Hyderabad.

No matter the questions of the puzzled observer and the clever expert, there are never any proper answers. Forget the possibility of even half-baked ones. The mind of the suicide bomber already blessed for her spiritual martyrdom, is unworkable for a psychological penetration, mute to ramblings and secretive to disclosures. The intimidating icy personality disguised behind its feminine veil, shuns any attempt at recalling the basic laws of compassion and the resurrection bearing any normal perspective of humanity that would have long faded away, by the time the hour of the ghastly act dawns.

To the foreign reader, The Attack proves insightful, guarded by its piercing clarity of terrifying distortions which masquerades an image of a forced hazy truth; one that shrouds the minds of revolutionaries, terrorists and radical religious worshippers.

In this instance, Dr. Amin Jaafi, an admired and distinguished Arab-Israeli surgeon at a Tel Aviv hospital is faced with an emergency call when an explosion kills several people in a cafe. It soon turns out that within the dead lie is his own comely wife Sihem; now represented only by a mass of sticky flesh for a body and a peaceful sleeping face – apparently as is often the trademark of the dead female suicide bomber.

Then began the questions, suspicions, interrogations and soon afterwards when all is dusted and done; the appalling deaths of each rosy ideal that for so long shielded a snug upper-class life. The surgeon is horrified when his haloed wife is declared the criminal. Dr. Jaafi is himself questioned as a suspect then cautiously released, his home in an expensive residential is ransacked by police, then vandalised by mobs. Some of his valuable possessions are also whisked away by detectives. He is watched and his movements recorded. This only, in the reader’s initial encounter with the plot. Later, all is restored as Dr Jaafi is declare innocent.

The doctor who had been left in the dark on his wife’s furtive plans, is himself in shock. His sanity is saved only by a few close friends as the acquaintances he and his wife had once entertained in the past with lavish dinner parties, and his own colleagues in the hospital now begin to shun him with appropriate alacrity.

Not that Dr. Jaafi is astonished in the least. As part of an old Bedouin family with ties still in Palestine, Dr. Jaffi had experienced his fair share of prejudice while studying to be a doctor in Israel. The curtailing of friendships and relationships by distrustful Jewish students, was the normal process of things. It was expected that they would turn their noses up at an Arab. Later, when Dr. Jaafi goes to Bethlehem to seek the terrorist group that may have influenced his wife to commit the atrocious crime; he is viewed as no less a traitor by the Muslims who hate his Israeli citizenship.

Dr. Jaafi doesn’t appear to care. Riddled with one sorrowful thought after another, all determined to strike his bare body like a rain of bullets, the protoganist is forced to confront his soul, imagining them as different mirored layers to his deeper self. In his steely focussed way, he needs to find out the truth and this need hurries him like a whirlwind.

With the help of his disgruntled and scared sources, Dr. Jaafi sets out on various nearby regions in the Middle-East to meet the fanatics, guarded by their robotic clinical minds and responsible for his wife’s doom. When he is finally offered strange revelations that betray his vulnerable trust towards a marriage he had cherished more than life itself and now threaten to shake the core of every fragile leftover memory, Dr. Jaafi becomes a different man and it is this new zealous quality that will block his return to the old destiny, even as he must continue to trudge a newer, harder one.

Khadra’s writing is detached from even a hint of feeble mawkishness from the start. He employs a straightforward cold style while dealing with grief. The Saharan-born author who holds a rich ancestry of warriors and poets, portrays a powerful effective sadness using a character’s mismatched actions rather than relying on descriptive emotions or hanging on to the safe adjective. The sadness prefers to race along the plot with brisk purposefulness, rather then linger with a melancholy air in the shadows. It is a sadness designed to engulf the story with angry flames rather than self-pitying tears.

Khadra’s writing is also wholly philosophical and he injects a strict but masterly analysis of character patterns and behaviour tendencies through every event and trival action in the novel, which is what makes reading him superb. It may have just been the reader’s gift while dwelling on the plot, to have been afforded the study of complicated characters with meticulous ease.

Khadra is eager to share the character’s pain with his reader but without stepping on any toes or carelessly creating distaste. With what could only have been a brooding thoughtfulness, Khadra draws the outsider, in from the first outset to inherit Dr. Jaafi’s mixed-up emotions and to watch with bated breath, the peeling of the hero’s reasoning to a definite logic. Khadra’s story is full of good manners….the author himself playacts the perfect gentleman while talking of full-blown horror. There is diplomacy and tact that encircle themselves with raw anguish. The reader is never left to mourn alone.

Dr. Jaafi misses his perfect love story and the exposition of past romantic scenes with his lost wife, Sihem in happier times is deeply poignant, enchanting, childlike and reminiscent of all the magic likely to sparkle with a first love.

Once more, these sections are never overly-sentimental but rather that they are held up to the skies like a sparkling shard of glass being watched over for an ugly stain or mark. There are no signs of scars and yet, the pointed glass is ready to stab any sign of musing that go wrong. The promise of tragedy lurks as an uncomfortable bystander and grief held to its sophisticated measure in the novel.

However, for this reader, two disappointments lay towards the end. One major scene was described in a predictable way so as to grant a reader the outcome of the episode, even before the book’s hero had a chance to figure things out. The second lay in the almost surrealistic effect of the ending; something unexpected and extraordinary but which managed to spell a moment of high defeat.

With the exception of the above however, Khadra has written an exceedingly clever and lucid novel. His lessons on contemplation for the reader are priceless.

The Attack by Yasmin Khadra was recently shortlisted for the IMPAC International Literary Prize in Dublin, Ireland.