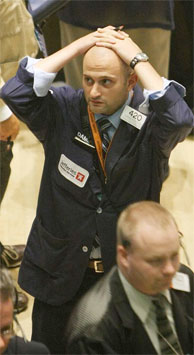 If you think that the US economy is not in recession, you are correct. The official definition of recession is at least two consecutive quarters of negative economic growth. However, after nearly eight years of resilient downturn, U. S. economy has not experienced any single quarter of negative growth yet. Consequently, the U. S. economy is not officially in recession.  But who cares about government definition. Most of us have been feeling the pinch of economic slump in recent years. The late president Aegean once said “A recession is when your neighbor loses his job; a depression is when you lose yours.” Suspicious of government data, I have been searching for the signs, and compiling a list, of the symptoms that can tell us whether U. S. economy is on brink of a recession:

1. Economy is so bad, I don’t know how many Ks are left in my 401K retirement funds
2. I can no longer afford a copy of Sport Illustrate Swim Suits, so I just pick up a free copy of Victoria Secret catalogue
3. When I tell my wife that I am eating out today, she knows that I am going to Sam’s Club for free food samples.
4. People go to airport just to get a free X-ray lying down on a luggage screening machine.
5. On my way to work, I saw Paris Hilton standing on the side walk holding a sign that said: unemployed, hungry; I appear in any video tape even with my cloths on for food.
6. Evidently, the bank rubbers have found it easier to get a loan than to rub a bank. Some banks have posted a sign at their entrance which says:  rubbers are welcome
7. Funeral homes have started offering generic funeral
8. Oprah Winfrey decided to serve as a juror more often just to earn $17.20 a day
9. Some divorce lawyers are offering buy one get one free deal
10. Cemeteries have hired two young men carrying shovel and pick ax, chasing every old person walking nearby
11. The business at Thrift shops is booming. They are changing their name to “poor men’s Wal-Mart”
12. Now, Afghanistan and Iraq are sending economic aids to the U.S.
13. Many of the immigrants want to be deported back to their native countries
14. Publishers Clearing House is changing its slogan from “you may already be a winner” to “You may already be a loser”
15. Anytime I go to McDonald’s, I have to down size my value meal
16. The other day, they were taping the “Life style of reach and famous” from Old country Buffet
17. Even Mormons can no longer afford polygamy any more
18. The name of the game show “Who wants to be a millionaire” has been changed to “Who wants to see a millionaire”
19. Hollywood is making a sequel to “Road to perdition” It is called “the Road to Depression”
20. Even Medaeen Drug cartel is filing for chapter 11 bankruptcy
21. People high jacking airplanes from U. S. to Afghanistan and to Cuba to seek political asylum
22. Bill Gates:
A. Buying refill ink cartridge for his printer
B. Washing his cloths at coin-operated launder mat
C. Changing his name to Dollar Bill Gates
D. Writing a sequel to “the Road Ahead”, called “The Bumpy Road Ahead”
E. Has been making sandwiches using ordinary catch up instead of Grey Poupon
F. buying gift for his wife at Dollar store
G. going to the county health fair to receive a free flu vaccine
H. asking the salesman at a jewelry store if they sell one carrot gold
I. asking the sales person at appliances store if they sell one foot refrigerator
J. Transferring his kids from private school to public school
H. Hitchhiking for a ride home
23. The Public Broadcasting Corporation (PBS) has been taping the “Life style of rich and famous” from Old Country Buffet
24. PBS was forced to cancel the show called; the “Life style of rich and famous” because they cannot find any
25. Cisco systems is changing its name to Crisco
26. Instead of shopping at Dollar Plus store, now I shop at regular Dollar store.
27. Sock market so volatile, I saw this famous broker with his clients at a children’s park riding see-saw to explain to them the stock market fluctuations
28. You can’t even trade 500stocks of Boston Chicken for one of its individual meal
29. One of those people who received presidential pardon rejected the offer. He said, given the condition of the economy, he prefer to remain in jail
30. The other day I was at my doctor’s office. He told me that your chest X-ray does not look good. I told him, I can’t afford costly treatments. Can you just retouch my X-ray and make it look better?
31. The Dollar stores and the flea markets are offering gift registry services.
32. Doctors offering free second opinion for prostate exam!
33. When your doctor tells you that he works with a team of international experts, he means that his cleaning lady is from Mexico.
34. NBC is launching a new TV show. It is called; Meal or No Meal
35. People burn their house just for the insurance money
36. the Lotto officials are offering a full thank of gas as the grand prize
37. Even Mr. Hue Hefner cannot afford to have more than one girlfriend
38. Any time a teacher wash his pants, his classes will be cancelled because he cannot afford a dryer and has to stay home until his pants dries out.
39. Older people celebrate the occasions of menopause and the finishing of deductibles on their insurance policy
40. People celebrate the occasion of the anniversary of their unpaid bills
41. Foreign countries have purchased so mush properties in the U. S that the title of the famous folk song “This Land is My Land” has been changed to “This Land is Their Land”
42. The U. S. corporations reward their CEOs with the certificates good for Happy Meals at McDonald’s.
43. Cabinet sellers offer kitchen cabinets and outdoor furniture with real live Lazy Suzanne
44. I told my wife that my tooth ache keeps me awake at night; she said that is good, you can moonlight as a waiter at Danny’s now.
45. National debt is at all time high. When asked how we are going to pay off the debt, President Bush replied we can’t. Let them send it to the collection agency

46. The last phrase of the U. S national anthem has been changed from “The home of the brave” to the “home of the broke”