Pulled out of fire 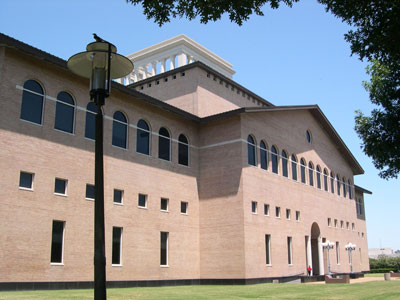 One of my architecture professors a the University of Houston is leaving the school and I went by today to pick up a notebook of mine that she had kept. I hadn’t been back in the building for a couple of years – the smell was still there.

It’s not a bad smell, it’s not a pleasant smell, it’s just its own smell. Maybe it’s the years of chipboard shavings, or the sawdust of bass wood or the mold spewing from the AC grilles that we affectionately called “vent vomit” – whatever it is, you can’t miss it. It was there the day I went for orientation in the Fall of 2002 – making a u-turn of sorts and going back to school, I found myself in an unfamiliar yet familiar place.

I met my new classmates: a stockbroker, a psychologist, an attorney, two interior designers, a civil engineer, a sculptor, an economist, a hydraulic engineer, an architect and a biologist – a motley crew by an stretch of the imagination. We gelled together pretty quickly and tapped our gang the “12 Angry Architects” – we weren’t angry, it was just that there were twelve of us.

Our first project was to build a partly hollow cube out of foam-core and then out of plaster over Labor Day weekend – labor day weekend indeed. Most of us struggled with our form work, but by Tuesday there were eleven white cubes with varying degrees of precision sitting on the group table in the Level 1 Studio – a thick square table showing it’s age with cuts, nicks, and the remnants of a myriad spray paints and dried glues.

Our studio space was, in a word, dark. Architect Philip Johnson had alloted us one round window above eye level. Johnson had copied Nicolas Le Deux’s design for the House of Education in the Saltworks and by sheer luck, we had ended up under one of the gables.

The building works in plan – it’s basically an open space on four floors overlooking a generous atrium. But the form is historicist, though not referring to any history of Texas. One of my professors calls it the “lowest point in Postmodern architecture in the world”. But it is a great conversation piece in any discussion of architectural theory and begs the question: is it better to train architects in a great building or a not-so-great building?

It’s only been a few years but the school now has a beautiful, larger and better equipped shop. In one of gallery spaces on the first floor, I saw the models, crafted with a “freaking laser” cutter, of the students in the DigiFab Studio for an outdoor space of meditation to be built in a green space next to the building. Not bad.

We spent three years getting a Masters degree in architecture; there was laughter, there were tears, there was the agony of defeat and the thrill of victory. I’ll never forget the time when one professor looked at my work at mid-review and said “that is the ugliest building that I have ever seen” (the fact that he was one of the oldest teachers at the school drove in the point only too well) – by final review he said that I had “pulled it out of the fire” and it had become “beautiful”.

There were the X-Acto knife cuts, whose scars I’ll have forever. There were the great teachers – each a bit crazy in his or her own good way. And of course, the many sleepless nights – all-nighters when invariably at about 3:30 in the morning something extremely funny would take place, followed the next day by the question: “is today Wednesday?”

As I walked through the empty building today, that smell brought everything back.