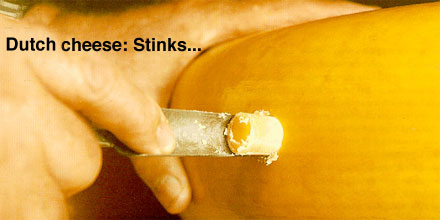 ‘Without doubt, psychological warfare has proved its right to a place of dignity in our military arsenal.’ – Eisenhower

The recent De Telegraaf article ‘revealing’ the Dutch intelligence cooperation with the CIA is a propaganda piece aimed at undermining the credibility of the United Nations specialized agency, the IAEA, and its chief Mohammad ElBaradei’s findings on Iran’s peaceful civilian nuclear program. As importantly, it presents war as the solution to a non-existent threat.

In an attempt to demoralize the Iranian people and undermine the resolve of the Iranian military forces, De Telegraaf would have the readers believe that the Dutch intelligence has been secretly operating inside Iran and has been sharing its findings with the CIA. It is common knowledge that the American administration is frustrated with the lack of information it has on Iran and its civilian nuclear program. Equally frustrating is the Administration’s dissatisfaction at being in the dark about the complex Iranian society and its government.

There are no or few Iran specialists; certainly few who are willing to cooperate with the CIA. It also seeks to demoralize the Iranians and undermine their resolve in confronting outside enemies. Likewise, it is an open secret that the terrorist cult Mojahedeen-e Khalg which according to sources receives its information from Mossad, has been providing the CIA with — not reliable and accurate– information. There is no doubt that the Dutch are cooperating with the CIA – but the extent of their cooperation is limited to communication – disseminating rumors.

Writing in Mein Kamp, Adolf Hitler claimed that the masses were more influenced by their emotions than by their brains; to this end, “all effective propaganda must be limited to a very few points and must harp on these in slogans until the last member of the public understands what you want him to understand by your slogans”. It would seem the neoconservatives are students and fans of Adolf Hitler.

Planting rumors with the intention of waging war against Iran, the neocons are well aware that misinformation which spreads through a third country lends more credibility to their propaganda. The psychological warfare waged on August 29 by the Dutch-Israel-American axis – De Telegraaf article, the threat by the former Labor Knesset Member, Eprahim Sneh (2), and the I during the Democratic Convention, are propagandist use of communication to achieve one objective – sacrifice peace to promote Israel’s expansionist policies in the Middle East.

Deceit has become an essential tool of statecraft with this administration and its allies. Lies have become more urgent and exaggerated as Iranians continue to succeed and Mr. Bush’s time to leave office draws to an end. While Iran proudly announces its peaceful accomplishments in various fields, the controlled media in the West hijack the news and undermine the success of such advances in order to weaken the morale of the people and the government’s credibility. Iranians are immune to this style of warfare.

When on March 31, 1949, VOA launched its first Farsi program, Harry Truman praised it and said that he hoped it would help facilitate greater understanding between Iran and America and promote prosperity and peace. His successor, Eisenhower, used it for covert operations to undermine the nationalist Mohammad Mossadeq in a CIA-backed coup. Today, Iranians are not affected by propaganda; whether they are planted in a Dutch paper or transmitted otherwise.

Tragically, the manipulation and propaganda has had its effect on the American people. Unruffled, the Conventions are hijacked and used to intimidate Americans into yet another war. And the Dutch continue to insult another Mohammad – this time one who was awarded a Nobel Peace prize in Oslo in accordance to Alfred Nobel’s will “to the person who shall have done the most or the best work for fraternity between nations, for the abolition or reduction of standing armies and for the holding and promotion of peace congresses.”