In black and white 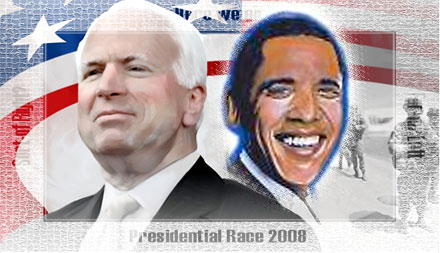 The conventions of the two major U.S. parties were some amazing events, propaganda machines that have a great impact, both to publicise to the relatively passive general public, and also to energise the members and the believers. I waited to see both of the conventions, so to be able to express my opinion (a very short one) about the two candidacies for the US presidency. These elections are important not just for America, but also for the whole world, as America is the most powerful democracy in the world, and the only credible and capable defender of democratic values in the face of serious threats.

The two major American political forces, the Democratic and the Republican parties, have two types of images, a subconscious (or maybe unconscious) one, and another, an attempted one! The subconscious one for the Democratic Party is the party of Socialists and Liberals, who can rarely ally, unless (as usually is the case) in the face of a serious political or other ‘calamity’. And the subconscious image of the Republican Party is the party of white Christians! White Christians, whether die-heart ones or moderate ones, can usually get along much better, though their absolute numbers are usually smaller than Socialists and Liberals put together. But their unity and belief in their cause make them a true force to reckon with in the United States. But these are not suitable images for two modern political parties to openly present to the public.

Of course the Republican Party also has black (or other non-white, or not exactly very white) or non-Christian members. As long as votes count, only stupidity, or too much of an irrational racism, can make one deny the presence of an extra vote (or voice) in the electoral process. And this cannot happen in today’s relatively stable and old competitively-democratic countries. Membership of a political party, and more, voting for one party or another, is more often the result of the hatred and dislike toward the opposing political movement and threat rather than a true belief in certain political views, plans or ideologies. And it seems that Socialists and Liberals, by the matter of a historical accident, seem to be unanimous haters of white Christians, and white Christians seem to feel the need to come together for their hatred of Socialism and Liberalism (or what they understand as Liberalism, social liberalism).

When I was watching Joe Lieberman talk to the Republican crowd, it almost felt like an alien from Mars talking to the people of earth against the threats of Communists (for instance) taking over in Mars! It simply goes against ‘common sense’ to see a Jew (or an Iranian etc) become a supporter of the Republican Party candidate. The Republicans would not mind it of course, but it simply goes against the generally supported, accepted, and fact-checked, hate theory, toward the opposing view that is! This is unfortunately how political parties work, not according to platforms, messages, ideas and plans, but according to intolerance toward the other, or some others. This is democracy! It’s the best possible option of providing for people’s needs.

So, the conventions were great. When I was watching the Democratic Convention, and I heard all those great orators, especially the Clintons, I was just thinking “where do I vote now?” The psychological impact was so great one felt the need to go and vote right away, before he changed his mind. Then, when I heard the Republican Party orators, and Palin, the candidate for the vice-presidency, was more than I could imagine, I felt the same, the urge to vote right away! So, both parties are great in their abilities to attract crowds and motivate their people. The Democrats came with a black man who talked music to the leftist ears, pleasing both Liberals (who hate white Christians so much, they don’t care about the Socialistic, leftist, details) by having the chance to elect a non-white president, and the usually relatively-not-so-wealthy, by promising them all sorts of goodies, social welfare and so on.

The Republicans threw at the Democrats and the general public, beside the white Christian old man they usually have, with a woman, and lots of born, or unborn, babies (of the VP and her family)! It was like saying “You have a black man, yeah? But we give them not just a woman, but lots of babies too!” The Republicans know almost for sure that none of their base (the white Christians) would vote for a black man whose father was a Muslim, and whose name is Obama (forget about Hussein), so they are trying very hard to appeal to the rest, so they came up with a woman (for the Liberals and especially the disaffected Ms Clinton supporters), and they are also lucky enough to have a strong Democratic Jewish voice (Mr Lieberman) to woo the millions of Jews in America, who are a serious voting block too, and usually a serious Democratic voting block!

This is going to be a serious battle! Will those who hate George Bush the second so much that they even wanted to change the colour of the president win over those who hate and fear non-white-Christians, in attracting the remaining who usually don’t care that much? I have serious doubts about enough Americans voting for a black man (I am talking about those who will vote him BECAUSE he is black, not those who will NOT vote him because he is black), though my concerns are usually about the policies, which are never the main issue (in reality) for the voters. And I like McCain’s policies (theoretically speaking, smaller more conservative government, less taxes, more ‘liberal’ economic and social plans) because they are better for the US economy, and society, but I doubt this will be either the reason he will get votes, or the reason he will not!

I also agree with McCain’s character and his leadership abilities, and his political courage to support a war which seemed all but lost just before the surge. I also agree with his plans for Iraq’s future. But even I (and I don’t have a vote in the US), as a person much more inclined toward McCain’s policies and plans, find it hard to vote a man from the party of the white Christians! It almost doesn’t feel right for an Iranian to do something like this! And I am sure this is how most other Iranians, and most non-white-Christians (Hispanics, Jews, African-Americans, Muslims etc), feel, still. But it is a beautiful country anyway, a great democracy, and no matter who becomes president, I am sure America will remain strong and prosperous and will still be the place Iranians who run from tyranny, call home!

PrevPreviousI am no man, I am dynamite
NextWhere were you on September 11th?Next