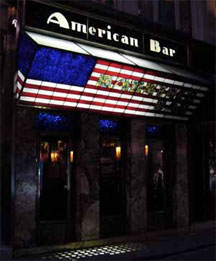 My friend Ali was in bad shape. He was telling me about it.

We walked through the park, past the museum and the baseball fields, where there was a game going on. I watched them and thought of the Iraqi boys who wouldn’t be playing baseball any more. Whether or not they knew what baseball was had nothing to do with it.

“I don’t hate them. I just couldn’t help thinking that today. Something happened between the news and sleeping. It’s a bad combination. I don’t recommend it.”

“What do you think they would say if they heard this conversation?”

“I don’t know. They might say that we’re terrorists, I guess. All I know is I just need a good night’s sleep so I can get back to looking at the world in my own way.”

We came to the entrance of the park on the Sunset side. I looked at the people and restaurants and bars and cars, and it did look like too much for one person.

“All right,” he said. I could see he was thinking of why did somebody have to stop going to a bar and ordering a beer in order for somebody else to know what it was. Somehow I thought that if it really was like that, if there really was a time when everybody in the world could do that, could just walk right in and order a beer wherever they were, there wouldn’t be any need for any beer to order.

“If we just stay in one place, it’s all right,” Ali said. “It’s when I’m out in the street that it’s the hardest. That’s when I look up at the sky and see the thing that connects something here with the same thing over there. It was that sky that did it. I felt scared of it – how big it was and yet I could see everything under it. I just need a good night’s sleep, that’s all.”

It was a losing business to look at Americans and wonder what they thought of the war. You could give them the benefit of the doubt, but you could only go so long doing that, because after a while you’d think, if they deserved this much benefit of the doubt, how did the thing manage to happen anyway? Philosophy and poetry and a general taking of the long view were nice, but fear was a very real part of the world too.

“I don’t know what to make of naps,” Ali said. “They are a good idea in theory. There are countries built around them. There might even be places in our country that are built around them. But I wake up from them as though I slept and didn’t sleep. I feel better and I feel worse. Even today, I felt a little glad that I couldn’t look at anybody without wondering why somebody had to stop doing something in order for them to understand it.”

Between us and Iran was an ocean. Something about the way he was speaking made me feel all its tossing and turning that we had traveled over as kids to get here. It was something that had been to Iran and gone all over the world.

We were the only two Middle-Eastern guys in the bar, but sometimes when it was me and Ali like that, it felt like we had the whole place, like we could walk up to anybody and tell them more about them than they even knew themselves. And we didn’t intend to, but that was part of the proceedings.

You had to do your best in whatever country you were in, and we had to do our best in America. I was a teacher and Ali was an actor, and it was summer and neither of us was working.

“Night is night, and when you go to sleep at night, you’re just doing what everybody is doing, ” he said. “But when you take a nap, you’re going somewhere where it feels like you’re with everybody and you’re completely alone. It feels like you’re with everybody but you can’t convince them of that, so you might as well be alone. I’d even written a note to myself about it the last time. I wrote a note that said ‘Be careful of naps.'”

“No. I especially wasn’t careful about the news. It was like I was trying to see the real truth behind the news story, but that’s hard enough to do awake. If I try to do it asleep, the day is shot.”

“Maybe we can talk to those two girls,” I said.

He looked over. “We can talk to them, but I’m not going to be very interesting.”

“I can only think about two things right now: life and death. And while it would seem like that would include everything, and allow for a conversation to go in any direction, you might be surprised at how much it does not. Most conversation topics are actually in between. Ask them if they wouldn’t mind coming back tomorrow night after I’ve had a good night’s sleep. Tell them I’ll be very interesting then.”

“Can’t you just imagine how you’ll be then and try to be it?”

It was good to have someone who you knew was thinking about the war even when you weren’t talking about it. I felt bad for him for waking up from the nap like that but I felt proud of him too.

“I don’t know what I would do if I didn’t have acting. I know that sooner or later I’ll be on a stage, where a man is allowed to feel things. Even just going to auditions. I can be free, because no matter who the character is, I know they care about life.”

“I’ve felt that way with teaching. It’s been easier to be free with kids than with adults. I just have to be free in a disciplined way.”

“I think that when a war starts, kids want to see that it makes an adult miserable. They know that there is a place for misery. They want to see what it is. It’s when they don’t see it that they start to wonder if that place exists.”

“Maybe for adults, it’s easier to do that in a place like a theater. There’s a beginning and an end to it. Otherwise it would be all the time.”

Ali didn’t have a stage to be on these days, and I didn’t have kids to talk to. It was all right. It was summer. We had the sun at least.

He stopped at one beer and I had two. He seemed pretty sure that all he needed was a good night’s sleep but he didn’t want to take any chances. Since the war had started, we had not gotten drunk together. It was as though we didn’t need to. We didn’t need it to remember and we didn’t need it to forget. That was how it was when you remembered and didn’t know what you remembered, and you were forgetting and not knowing what you were forgetting either. It was funny to think that in Iran a guy was desperate to find a beer since it wasn’t around, or desperate to show that he didn’t need one, and here we were not even knowing how to drink.

We walked back through the park and from the band shell in the amphitheater music was coming. A boy and a girl were dancing. It was a pretty thing to see. It looked like their park and their city and maybe even their world. Only I knew it wasn’t their world anymore. I didn’t know if it was anybody’s.

I looked over at Ali and he didn’t even have to say it. I knew it from looking at his face. It looked like he accepted everything and accepted nothing. I knew he had a right to ask why did a boy and a girl have to stop dancing, why did music have to stop playing, why did a night have to stop feeling soft out walking in the summer. I knew I had a right to ask it and so did everybody. We couldn’t always be asking it because then we would be asking on a stage and in a classroom, and our jobs when we were there was to be all the way there, especially because we didn’t look the way people usually did in either of those places. But I knew that we would never stop asking it either. It was the only way to care about dancing and music and summer. Those things were best when everybody had them.

We didn’t say another word and we didn’t need to. We came out of the park and when we said goodbye, I never wished harder that someone would have a good night’s sleep than I did for him, almost like I would take a bad one for myself if that would do it, like it couldn’t be bad if I knew somehow that he was sleeping soundly.