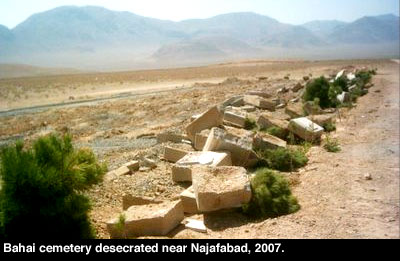 [Shemiranie was born in Iran, studied in Germany and lives in Canada. He is a freelance writer specializing in analytical articles on the socio-political issues of Iran and violations of human rights. The following is a translation of his recent article titled “I Am a Bahai Too!”, published in Shahrgon online journal, 12 September 2008. Shemiranie is not associated with the Bahai community and lives in Canada. — Ahang Rabbani, translator.]

I want to cry out: “I am a Bahai! For as long as belief in the Bahai Faith is viewed as a crime, consider me a Bahai too! For that, you can end my meager pension, you can stop me from going to university, and you can abuse me in grade school and high school! You can seize me, bind me, imprison me, torture me, separate me from my family, burn my house, confiscate my tools through your religious laws , prevent me from earning bread for my children, execute me and at the end, expel me from Iran – my sacred land!”

It is more than 150 years that, leaning on the Shiite clerical establishment, the governmental apparatus of Iran has been determined to suppress the Bahais of that land. At times these suppressions have been so extremely intense that border on criminal insanity and at other times they have been more subtle and insidious – but always, always they have been present.

The fact that rulers, desiring to maintain their power, and religious priests, fearing the loss of their demagogical influence, have ordered and issued verdicts to suppress [the religious minorities] perhaps is not surprising. Most of the prominent men of history have sacrificed humanity for the sake of more power. And to protect their materialistic domain and riches, with utmost deviousness, the ecclesiastics bereft of spirituality have always and in all parts of the world, turned to corruption and the killings of the innocents. Unfortunately this historical trend is not surprising either.

What causes astonishment is the silence of the society – a society which at times actively collaborates with these barbaric deeds.

It is no secret that what has befallen the followers of the Bahai Faith in Iran has often come about through our own hands. In response to every authority that issued an order or every akhund that produced a religious verdict, tens, hundreds, nay, thousands, of us proceeded to perpetrate harm upon the Bahais and on occasions reddened our hands with their blood. But, why?

The collaboration of various sectors of society with the centers of power and the religious authorities can be attributed to ignorance, and one could say that every society has its share of ignorant individuals, who are used and exploited by influential and powerful elements or its ecclesiastic orders. But what about the group that calls itself progressive, intelligent, on the intellectual vanguard, supporter of the people, and such names, and its claim to moral authority has filled every ear?

Should we close our eyes to the truth that almost every political organization, whether on the left or the right, religious or secular, nationalistic or otherwise, in the most self-serving way have colluded in this suppression? Was not providing the theoretical justification for this suppression [of the Bahais] the best support of the oppressors?

One of the most widespread notions for justifying suppression of the Bahais was: “The Bahai creed is not a religion, but a political organization in service of imperialism.” Did we ever ask: Based on what evidence, what document, do we formulate such an absurd claim?

The Tudeh Party of Iran was one of the most prominent promoters of the above notion, though it was never able to produce a single document in support of its claim. However, the manufacturing of this undocumented theory prompted the silence – and at times the supportive silence of the intellectuals – over the suppression of the Bahais after the Islamic Revolution. The painful truth is that such a theory not only gained currency among the supporters of the [Tudeh] Party, but it also received widespread acceptance among the groups opposing the Tudeh.

The point of referring to these realities is not to analyze the role of this Party or the part of Iranian intellectuals in consenting to the suppression of the Bahais. Most evidently, this is an issue that deserves much greater exploration, requiring careful scientific research and presentation of various documents and testimonials – a task which to the present has received woefully little attention.

The purpose of this essay and raising the points above is to say: Now that we have begun to understand the concept of human rights, then even if we thought “the Bahais are a political organization in service of imperialism”, we have no right to condemn them without proof and substantiated documentation.

We know today that the mass condemnation of all Bahais – like mass condemnation of any other strata of the society – is an evident neglect of the provisions of the Universal Declaration of Human Rights. It is this Universal Declaration which we use to denounce the execution of the underage, affirm unlawful any interference with free assemblage or association, and uphold that repression of students and women is barbaric and illegal.

If we truly are defenders of the right of all humans, now is the time to raise our voice in unison and cry aloud: “For as long as the followers of the Bahai Faith are suppressed and imprisoned for their religion and convictions, we are all Bahais!”

Despite the evident threats to her, Mrs. Shirin Ebadi, in a courageous deed, has accepted to defend the Bahai prisoners in Iran. She, however, is under considerable pressure and, in order to be able to continue to discharge this task, she was forced to affirm that she and her daughter are not members of the Bahai Faith.

If all of us, or at least a considerable number of us, who claim to be promoters of human rights, were to join forces, perhaps Shirin Ebadi – this brilliant legal defender of peace and human rights in Iran – could raise her head high and tell Kayhan and all those inconsequential, malicious people behind Kayhan, who are more evil and vile than Satan, that: It is none of your business what religion I or my children adhere to!

We must praise the courageous act of Shirin Ebadi and hasten to support her and all defenders of human rights in Iran.

And until such time that mere following of the Bahai Faith in Iran is the source of discrimination and punishment, I, Khosro Shemirani, am a Bahai too!