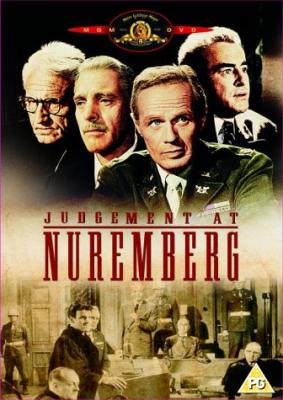 Stanely Kramer’s 1961 classic movie resounds with great power in this scene with Burt Lancaster as one of the rependant Nazi’s on trial for War Crimes.

To understand the moral and ideological dillemas that have haunted generations of people around the world after WWII and explain the rise of Nazi ideology in Germany and the the system manipulated ordinary people to do criminal acts against humanity and the impact the Holocaust revelation had on the post war era one should simply watch this powerful performance by Lancaster which I am sure you would agree could replace any classroom history course on Nazi Germany:

Judgment at Nuremburg  (released in the UK as Judgement at Nuremberg) (1961) is a fictionalized film account of the post-World War II Nuremberg Trials, written by Abby Mann and directed by Stanley Kramer, starring Spencer Tracy, Burt Lancaster, Richard Widmark, Marlene Dietrich, Maximilian Schell, Judy Garland, Montgomery Clift, Werner Klemperer, and William Shatner. Originally written for television,[1] the film depicts the trial of certain judges who executed Nazi law. Such a trial did occur: the film was inspired by the Judges’ Trial before the U.S. Nuremberg Military Tribunal in 1947. By the time the film was made, all of the convicts had already been released, including four of them who were sentenced to life in prison. A key thread in the film’s plot involves a “race defilement” trial known as the “Feldenstein case”. In this fictionalized case, based on the real life Katzenberger Trial, an elderly Jewish man was tried for an improper relationship with an “Aryan” woman, and put to death in 1942.

Footage of the real Trial below:

THE LOST REQUIEM OF KHOSROW SINAI BY RYSZARD ANTOLAK