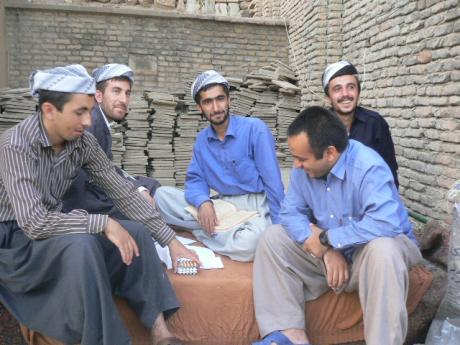 Although I am by no means any sort of expert, after spending a small amount of time in Kurdistan, I’m left with a few impressions of the region.  Most important, I found the negative stereotypes I heard about Kurds while in Tehran to be anything but true.  Iranians are extremely hospitable, but even by those standards Kurds managed to outperform.  I could not believe that was even possible.  Literally everywhere I went in Kurdistan I was invited into homes, offered meals, fresh water, taxi fares, and gifts, even when no English or Farsi was spoken.  Even though I am the camera-toting tourist, I found that several times I was the one being filmed and photographed by the Kurds.  They certainly were curious about how I live and what the customs and laws in my country are.  Funny that now that I am back in Tehran, my friends wonder how I escaped Kurdistan not being raped or killed.  Again, I think this must be because they have no real-life experiences with the Kurds aside from hearing about clashes they have with the government on the government sponsored news.  Just to prove my point instead I tell my Tehrani friends that I spent about the equivalent of 20US$ for a week in Kurdistan due to all the generosity and care the Kurds offered me.  More than that, I made some genuine friendships there.  Kurdistan has been my favorite region in this country, which certainly says something.  How can I ever reciprocate?  I kept asking but they kept insisting that they derive great pleasure from taking care of others and “serving” -something I am not very used to or comfortable with, but I did my best in offering friendship and cultural exchange.

As far as socio-economics, I saw several beggars in Kurdistan, which was surprising since I had not many in other parts of Iran (Tehran, Tabriz, Shiraz, Esfahan, and Yazd).  I was led to believe that many of the beggars (many who are clad in black including the face covering below the eyes) are from Iraq.  I often gave them money feeling it was the least I could do seeing what a mess my country has made of theirs.  As you know, like many I am not for the war in Iraq, and would like to see the occupation end soon, however being in Kurdish country, I was exposed to the Kurdish take on the situation.  The Kurds I met highly appreciate and respect the Americans and their vision of autonomy for the Kurds.  That has been reported in the media, so it is no big news flash.  According to friends who are Iraqi, or have close ties there, Kurdish Iraq has now been likened to “heaven.”  Apparently, the Americans have built hospitals, schools, etc- for the Kurds there and they are living in freedom that they never had before.  In addition there is supposedly little military presence in that part of Iraq.  When I was traveling to the Oruman valley on the border I wanted to go to the actual border- however it became apparent that this was too dangerous an affair.  Close by there were dirt roads full of dilapidated cars with hundreds of jugs of gasoline waiting to be smuggled into Iraq.  I guess gasoline in Iran is much cheaper here in Iran than there in Iraq.  Many men risk their life in the heat walking through the mountains over the border with jugs upon jug on their heads, back, etc just to try to make a living because there is little other way to make much money in the region (from what I heard the government has not invested much any factories or industries in the Kurdish part of Iran).  Men usually put blocks of ice ontop of their heads and in their shoes before making the journey with all of this illegal gasoline since it is so hot- when it was there it was well over 100 degrees!  One of my friends said it best: “they will pay their life just to have the chance to try to make a living for their families.”  True.  A different friend told a story of crossing the border when another car was going over the border with illegal gasoline smuggled in the car.  Reportedly, police shot at this car and of course, it exploded; all lives in the car were lost.   Again, I am getting this information from various random people I met, so do not quote me on any of this.

Before coming to this region I raved about Iranian roads.  They are still pretty good here, but it was interesting to see that there are no paved roads in many parts of Kurdistan, including the road to the Oruman valley, which has large potential to draw tourism and therefore money to the region. Iran’s largest fresh water lake is also in this border region, but few tourists go there compared to other parts of Iran; it does not seem as if the bigger government has any interest in plugging Kurdistan.  Sad to say, but maybe that is how they have stayed so sweet- not havig as much outside influence. This region also suffered greatly during the Iran-Iraq; just as I saw in Vietnam (on a smaller scale here though) there were people walking around with deformities from the chemical warfare that took place.  Many bombed-out shells of buildings lay in ruin, with no apparent reconstruction plans in sight.  Reportedly there are also many landmines in this area which are still active. I saw some people with missing limbs, just as in other parts of the world where this remains a problem.  I was told some of the gasoline smuggler have lost life and limb this way as well.  From what I hear there are no government plans to try to clean up the mines.  Again that is just what I heard informally out on the streets from the people.

Although I loved Kurdistan I did notice that it was more “traditional” than other parts I have been to in Iran.  By traditional I mean there are fewer women around during the day- meaning that they are at home cooking, cleaning and caring for their children.  I do not want to impose my western values on this but for me, it seems pretty limiting that so may live that way.  I am sure some really do love doting on others, but how can all?  At times it made me uncomfortable how women would be incessantly attending to my, their children’s, and husband’s needs but never sit down at eat with us because they were too busy cleaning.  Sad.  This exists in many parts of the world, but I guess it stood out because it was more dominant in Kurdistan than other places I have been here- although it definitely still exists, big-time.  One woman I spoke to expressed that she too sees this in her culture, and she cannot wait to move to Tehran.  She said she will resist getting married because she does not want the sort of house mom life, which she sees as unavoidable if she gets married.  We both separately likened it to a sort of prison.  The good side of the traditional bent, is that I saw fewer black chadors in Kurdistan, and instead more traditional color and relaxed hejab fashion (and not in a tacky Northern Tehran sort of a way- just a more natural sort of way).