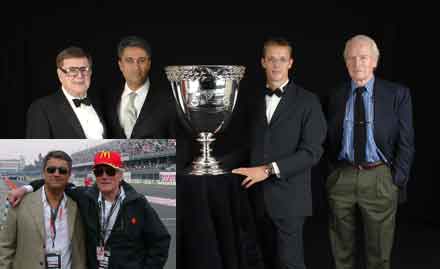 Today, I am grieving at the loss of 83 year old legendary actor and social activist Paul Newman, who was also a great humanist and dedicated his life to helping the world’s needy, especially the sick children.

Although I had met him only once at a fund raiser for his ‘Hole in the Wall’ charity,  I felt I knew him rather well, not simply because I am like countless millions of others a devout fan of his movies and always admired his tireless charitable activities, but also because Paul was a dear friend of my brother, Mohsen (above photo), and our brief encounter in Palo Alto, California, two years ago left a lasting impression that I cherish forever.

Addressing an intimate group of high tech executives that evening, Paul spoke briefly about the current and future plans of Hole in the Wall, expressing appreciation for my brother’s effort in organizing that successful fund raiser.

He was genuinely interested in the United Nations and I used the opportunity to make a pitch for putting him together with the UN Undersecretary For Peacekeeping Operations, Jean Marie Guehenno, whom I had recently interviewed for a UN magazine, hoping that Paul would then consent to celebrating the UN Peacekeeping Day at the auto races through a UN button attached to the uniform of drivers.

Subsequently, I was informed by my brother that Paul had expressed real interest in such a meeting and yet due to health reasons was unable to make it.

Also, subsequently Paul expressed a strong interest in a movie idea called “The Fourth Man” dealing indirectly with the Iran-Contra Affair. He had just turned down a film script by his old friend Robert Redford and felt that Redford would be rather unhappy if he picked up another script.

He was done with movies and was now officially retired from Hollywood, though never from his true passion of auto race, in light of the couple of race cars he and his partners, Karl Haas and Mike Lainigan, owned, one driven by a young driver, Rahal, in whom Paul vested a lot of hope as a future champion.

I once asked Mohsen what he thought was the underlying cause of Paul’s passionate love for racing and he thought that “it’s something holy for them, as if he feels nearer to God when he is at the pit stop.”

What I liked most about Paul was his humility and selflessness, his unique ability to engage in conversation with people as a most ordinary man that, if you did not know his identity, you would never think that you were speaking with a world renowned living legend who was loved and admired around the world, although I must say that I found  his piercing, mildly inquisitive stares deep into your eyes, instantly revealing a seasoned veteran of life’s so many adventures who reached the pinnacle of Hollywood stardom and who selflessly devoted a major chunk of his time to various charitable activities.

Paul was an exemplary hero, for all of us, the entire humanity, who broke the barriers, religious, political, racial, etc., and reached us all through the combination of his numerous artistic creations and equally impressive dedication to humanitarian causes.  God bless his soul.