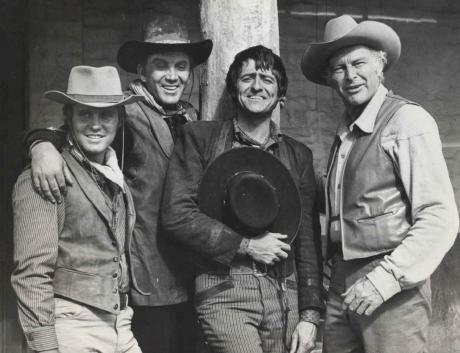 The High Chappaal was one of my favorite TV shows that aired in Iran in the early 70’s. I think one of the things that made it popular along with other similar TV shows on the Wild Wild West was the fact that as Iranians we could identify to the climate, dust and thirst as well as the ethnical diversity in these series. Unsurprisingly the series were also a Hit in King Juan Carlos’ Spain where it has a great deal of aficianados and fan clubs. The Cowboys and Cowgirls were not all white American Wasps and the Ranch was an example of racial coexistance unlike the world of violence and adventure to which the characters were confronted to. Big John Cannon ( Lief Erickson who reminded me of Richard Burton with his white sideburns) was married to the beautiful mexican wife Victoria Montoya Cannon (Linda Cristal) I particularly loved two of the characters : Manolito (Henry Darrow) The Mexican/Indian) who had a wonderful accent and quite an ironic and sexy smile. He looked like always a thought or two ahead of all the characters. The other character I think we all loved to watch was Buck Cannon (Cameron Mitchell) ( with an Iranian name like Cameron who wouldn’t, even if he wasn’t Persian) who was always looking cool in his dark black leather suits. Also I rememberI that I was always scared to the shit when the Apaches would attack the Ranch. They were so scary and looked invincible. You never knew if the episode would end happily or tragically. The suspense was probably what was so good about the episodes.

see part of the episode:

The Thirst and the Dust:

And a documentary on the location where the show was shot ( Tuscon Arizona):