Hang On, Time Out! 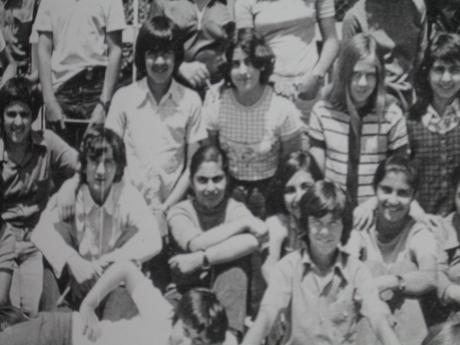 Years ago, when the Shah was still reigning, when the phone would ring at our house, my brother would answer the phone and if a school friend would ask, ‘can I speak to Zahra?’ He would respond, ‘Zahra raft-e behesht-e Zahra.’ Most friends would cordially hang up the phone, but my best friend would persevere. She had heard the ‘joke’ before and wasn’t going to get swayed by my

Cut to 30+ years later: My best friend and I had completely lost track of each other. As luck would have it, a brilliant schoolmate set up a web site and we were fortunate to now recover ourselves in a virtual schoolyard! My best friend and I finally reconnected. In time, we discovered that we had even attended the same university – just a few buildings apart, but we simply didn’t know. My best friend and I made plans to get together for a picnic and as I was driving up a steep hill to her house I told my daughter, ‘you know, you are so lucky, you will now meet my best friend from the time I was your age.’ My daughter loves meeting my old friends because they usually can’t wait to share stories about me: “Did you know your mother got her nose caught in the refrigerator?  That’s no easy task I tell you,” my one friend added, “you have to be particularly dufus-like to do that!” Did I stress enough how much these stories are appreciated by my daughter?

But here we were, what a pleasure it was to see my friend again. Her eyes were as beautiful as always. Her warmth and care was just as I remembered it. And as an added bonus (as if I needed one), her parents were there also. Her mom kept repeating that my daughter looked exactly like little Zahra!

She kept grabbing my daughter’s face and kissing it. And my daughter completely unaccustomed to this level of Persian-ness, stood there quietly – letting her face be pulled and stretched in every direction. Finally we were passed the greetings but before the tea was served, the expected question was hurled at me: Does your daughter speak Farsi? Inevitably I was lectured with, “Va zaboon-e madarit-e, how can you not teach her Persian?” This topic used to bother me immensely until I was at a gathering when an elderly woman asked if a three-month-old baby spoke Farsi. My friend who was the father said, “Vala, at this point, she doesn’t speak any languages.”  In an instant, I was released from the enormous guilt that my daughter did not speak our beautiful language. Yes, I have heard the famous Shamloo piece (I admire him greatly) and I owe it entirely to my father that I still speak and write Persian because he would not have it otherwise. And yet, when I had a child, what was important to me was for my daughter, my husband (who is not Iranian) and I to be part of the same unit without any cultural and language barriers. My friend’s mother bought this answer. So, we got past the first hurdle and I could see my star was fading fast, but so be it. Next was the second completely-expected- question: Why do you only have one child? To which I have a very standard answer. At age four I decided the following: a) have a daughter, b) attend university, c) get married. Oh, the number of times my parents would ask me to repeat my goals and laugh endlessly. As it turned out, that was not the order of things, but all goals were indeed met. I also had too many friends who almost forget their first child wanting so badly to have a second child. Who said two is right? How many siblings do we know that are in 2s but have not spoken for years? So I shared with my mother’s friend my actual age thinking that will cut the conversation on this topic short. Without a beat she asked me, “do you still get your period?” This question was NOT expected. And this is  the question that triggered this blog, HANG ON, TIME  OUT! This was one of those moments that you want to freeze and do a slow 360 degree with the camera. Try to look at this question from all angels and seek the origin, appropriateness, and possible answers. Since I have been asked the one child question so often, I have found that inappropriate answers sometimes work best. But, I want to leave it up to you Dear Reader to bring your thoughts to the table. Is this simply women mumbling things they have heard and saying things without even thinking that they might be trespassing a delicate boundary? I say “women” because not a single man has pursued this line of questions. Is it because truly my daughter will be forever lacking in life because she doesn’t have a brother or sister? Of course this is not particularly Persian in nature, but aren’t there other topics we could be talking about that are far more significant? At least my own mother has mostly pushed the topic of adoption – now that I can see the logic of, but trust me when I say, I love my one child and wouldn’t change a thing because I think I am a better mom for one child rather than two or more!

Let’s delve into this one together.  Questions used to be: Why aren’t you married? Next was, why don’t you have a child? And now you know the questions … I am eager to learn why we seem to always be asking questions that emphasize how things are missing or incomplete?

Over the years, there have been many HANG ON, TIME OUT! moments and I hope to share many more with you and I look forward to reading your part of the discussion.