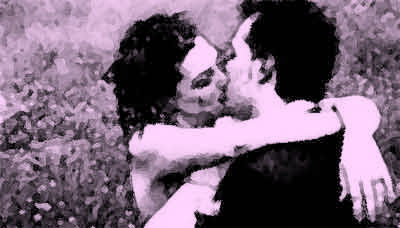 I hope this letter finds you, Amir Khan and my dear cousins, all well. Forgive me if I always seem nervous and cut our telephone conversations short. I am so paranoid that Shahab is going to walk in on us or that he will somehow find out just by looking at me or by a slip of my tongue that I have been in contact with you. Also, when you pose me all your questions so fast, one after the other, I can’t gather my thoughts to answer them properly on the spot. It is as if Shahab is sitting in front of me, his eyes fixed on me, repeating the cardinal rule that he loves to repeat so much:

So for now, please have a little patience for my letters to arrive to you. They will be far more coherent anyway, since I will have had the time to organize my thoughts and choose my words carefully.

Khaleh Joon, I want you to know first and foremost that life here is not as bad as you think, nor as bleak as I first painted it to be soon after my arrival. Yes, Shahab is suspicious of you and he can be quite moody sometimes, especially right when he comes back from work. But he can also be quite loving and fun to be with. We often go on picnics in the park, and by the ocean. At night, he likes to drive us up winding roads to the top of the hills of Los Angeles so we can admire the dazzling lights of the city below. And when we come back, before we get into bed, we often take a dip in the common pool. We splash each other and laugh like children who have no worries in the world.

Although we don’t have much money, we have each other and that’s a good start. While Shahab is at work, I have been busy too, scrubbing the apartment from top to bottom so that it does not seem so dingy and drab. Let me tell you, the kitchen was the worst part! Do all bachelors live like this before they get married? An empty fridge except for twelve bottles of various sauces, each one almost but not quite empty. Ugly plastic plates and bowls, none of them matching. And an oven that has been serving as a nest for all sorts of creepy crawlies for god knows how long! I am so happy I brought all that china and silverware from Iran!

Also, with the money I save on what Shahab gives me for groceries, I have managed through a little of what they call “woman’s touch” to improve our sad lack of furniture. I buy stuff from the many garage sales they have throughout the city every week-end then, when I bring the pieces home, I scrub them ferociously, paint and varnish them, sew new upholstery and voila! We now have a breakfast table and two chairs, a sofa and reclining chair, a cute little coffee table, and a few paintings and potted plants to liven things up a bit. Shahab was quite reticent at first at these projects of mine but when he saw the results, he embraced me and heaped so many praises on me, telling me he was so proud of having a wife with so much “honar.”

It was when he was in such a good mood that I mentioned to him the issue of enrolling in college for some English language classes, as you have advised me to do over and over. To tell you the truth, the conversation did not go very smoothly. Shahab’s first reaction was to frown and to ask me mockingly:

I was so shocked. I didn’t know where this overreaction was coming from. Keeping from crying, I replied that I wanted to learn English so that I could be a help to him, not to leave him, and that his suspicions were ridiculous. I did not want to be a burden, with him having to drive me everywhere, and act as a translator, from the grocery to the laundrymat, or wherever we went. And, I ventured, once I learned the language, I could maybe get a job and contribute to our income.

At that, he laughed so hard. He told me that no wife of his would ever stoop so low to get a job and that he was man enough to take care of me. He told me to stop worrying like such a woman, and that our fortune would soon change.

— “You are working on a one hundred thousand dollar deal? How? When? Why didn’t you tell me this good news?” I asked excitedly. “Didn’t we promise to confide in each other?”

He answered that it was highly secret and that should any rumour of it get out, the deal would fall through. Plus, he wanted to surprise me once the deal was completed and the money was in our hands. Now it was my turn to laugh. I told him I did not know anyone here to spread a rumour even if I wanted to, and why would I do something to jeopardize this wonderful news?

After that, Shahab suggested that we go to the local park to celebrate Sizdeh Bedar. I agreed heartily as it is so rare that Shahab wants to do anything related to Iranians. He usually avoids the Iranian groceries, restaurants and other places of business like the plague. He told me that all Iranians here in Los Angeles are a bunch of crooked criminals and jealous backstabbers. He blames his Iranian partners for having defrauded him of his business and fortune. When he talks about that subject, he becomes so pensive and sad. Dellam misoozeh barash, my heart goes out to him.

Sizdeh Bedar was quite fun here and your place was very empty. We went to a very beautiful, very large park not too far from our home. My god, Khaleh, it took us one hour to find parking. You would have thought that all of Tehran had shown up in this place to celebrate the start of our New Year. It was so amazing to see the sight of all the kids playing, grandfathers smoking their ghelyoun and playing takhteh nard under the trees, women laying out their soffreh on the grass, men placing the tender, tasty meats on gigantic sikh-kababs. My nose was tickled at the wonderful smell of meat being grilled and rice steaming everywhere I turned my head. I closed my eyes and thought of you all and I got so homesick. I was going to get really emotional when suddenly, the sound of loud and cheerful Persian music caught my attention.

Shahab and I followed the sound of the music to a makeshift little stage in the middle of the park, around which a crowd was ever growing. There, a beautiful woman was singing, accompanied by a male keyboard player. The music was quite catchy and fun, and I found myself getting less homesick and more in a dance-y mood. I kept staring at the singer, a thin, big busted blonde with pouty red lips, dressed in what can only be described as a bikini with a little bit of extra material sewn onto it. Although it was crazy to think so, I started imagining that there was something so familiar about her. Shahab was not in the mood for singing or dancing. He kept groaning to go but I playfully ignored him, and made us edge closer and closer until we were in the front row. I kept looking at the singer and I must have finally willed her to look back at me. When she did, to my shock, she smiled widely and gave me a wink and a nod, as if she had recognized me too.

Shahab noticed and asked me in a low but angry tone:

I shrugged my shoulders and looked on. Shahab thinks all Iranian women in Los Angeles are whores and likes to repeat this over and over. After she finished singing, someone announced over a loudspeaker:

— “Ladies and gentlemen, a loud round of applause for the talented, the beautiful, the only… Debbie!”

At that, the mob erupted in cheers and whistles. Legions of young men and women swarmed towards her until she was drowning in the sea of her fans. Shahab and I turned to leave when suddenly, a hand tapped me on my shoulder.

It was only then that I finally recognized her. I turned around and yelled out:

Yes, Khaleh joon, that Persian pop sensation Debbie I just described to you was none other than my old schoolmate from Iran, Maryam. I am sure you remember her, Haj Mohsen’s daughter. She was so austere and kind of terrifying, in her severe floor length chador and a pair of always frowning, thick black eyebrows over her reproachful eyes. We used to call her Maryam Moghaddas because she was so preachy with her chastity lectures and her oh so superior moral standards.

Now, she has an almost totally new face to go with her new name. Gone the hook-nose and thin, judgmental lips. Gone the long, thick black mane that she usually twisted into two enormous braids that sprouted from beneath her ears like tentacles. And her body, that is a whole other story altogether. She looks like a Barbie doll now!

After I regained my composure, I embraced her and introduced her to Shahab, who was very rude on purpose and walked away. I just had the time to tell her my telephone number before following him. I actually am so excited that I have found a friendly, familiar face here that I have sworn to myself, no matter how much Shahab complains, I am going to try to do my best and renew my friendship with her, even if I have to do it secretly. I imagine she is surely going to have an interesting story to tell me. I will write you soon and tell you all about it.

Til then, I send you, as always, my love,

PrevPreviousIranian Actress Heads Into a Storm
NextWhat is in a name?Next